Saturday August 28, 2021  –  Mother Nature threw some hurdles at me today trying to get me to not fish ,   The temps were predicted to be 105 degrees from noon to 4:00 and I was a bit worried that the Smoke from the Northern California Fires might waft into the valley and close the lake like it did last year.   Dan and Vaughn had a great day on  Wednesday,  Brian caught tons of fish on the lake on Thursday and Steph was going to meet me out there on Saturday.   When I pulled up to the smokey forebay,  I could see half a dozen tubes and Kayaks on the channel.  The boat trailer parking lot had a dozen boat trailers and  some jet skiers were already launching at 8:00 am.      The solunar tables were predicting a meh day with the only peak at 12:30.

Having not fished in nearly two and a half weeks,  I was withdrawing badly and needed a fix.  Plus I needed to get on the water to test out a couple Spey Lines on some new Spey rods I will be taking to Alaska in a couple weeks. You can only test Spey lines on the water.   I iced up the 5 gallon water cooler and put it in the boat hoping that it would stay cool and keep me from overheating all day which is did.   By noon most of the boats were off the water.  I can say that the 100 degree humid heat  in Charleston SC last week  made today feel cool .   A hurricane brushed by Charleston last week and it rained most of the time I was there so I couldn’t go redfishing in the grass.

The least crowded weed bed on the forebay when I launched was the weeds between the rock wall and the islands.    I had done well in the wind there two weeks ago and decided to work the calm morning conditions along that weedbed.   When I snuck up on the weedlines,  the Panoptix started going off.   There were tons of fish working bait along the hard weed lines.   Some of the weedlines were breaking up.   The weedline was not as healthy as two weeks ago maybe because the water level in the Lake is below the trash racks now and there won’t be any current from the dam  for a long time.   Rumor has it that the lake make be closed for a couple years as they try to raise the dam and to increase water storage.   I ;caught  15 fish in the first hour  and texted Steph who also had  about the same  by 9:00.  There were  lots of nice fish down the weedline that were eating but  around 11:30 the current seemed to stop and  it got really slow.   I decided to go fish with Steph at the wall but as I approached the rock wall at Medrious,  I noticed a hard weed line on the east side of the channel.  I made a few casts  and caught fish there.   After Steph left for the channel,  I went to the buoy line and started fishing the rock wall  along the weedline,    I picked up another dozen fish off the wall and ended up going to the channel around noon.    When I got to the channel at noon  people had already left for cooler temps.  It was about 104 degrees.      The west weed edge was breaking up and not as dense as it was two weeks ago.   I started fishing it from the bridge to the islands,   I caught fish steadily fishing the fly deep and slowly about 10 feet out from the edge..

Halfway down the weedline in the channel,  I hooked a 5 lb striper which sounded.   When I dragged it up from the bottom to take a good look at it,   a huge fish  well over 20 lbs came up from below the fish and took a swipe at it as I was playing it in.   The hooked fish was 22 inches and and hardly a small fish.     I changed to a 6 inch Delta Clouser and moved the boat up to the top of the channel working  back down to the spot hoping to get a second shot at the big one but  I kept hooking smaller fish from 18-22 inches  on the big fly.    The big fly was actually working better than the small Delta Smelt I was using on the regular fish.    I never got the big one but I think these next couple years with the Dam not releasing water,  the water dynamics in the forebay are going to change.     The big fish that hang in the current right below the dam are probably swimming the channel now that there there appears to be no water being pumped from the trash racks of the dam.    That striper was the biggest Striper I have ever seen swimming in the forebay.

I caught well over 30 fish today and it was pretty steady all day.    At times during the day ,  The bite would slow down despite the fish being there.   Maybe it’s the heat or maybe it’s the current.   I also noticed that in the morning,  there was some current  along the weeds.  I have no idea why but I suspect it’s from Mendota Canal.    The trash racks are completely out of the water now.    I threw some topwater plugs today looking for schools of surface fish .   I actually had a couple blowups on a Zara Spook in the shallow flats across from the Medrious Boat Launch.    I didn’t have any luck working a crease fly to the blowups.   Also , In the stomach of the larger striper were two large threadfin shad about 5 inches long.

The Stripers in the Forebay are so healthy feeding on protein and working out I guess.   They pull like bonefish and are hot like the weather.    I thank god that we have such a great place to fish so close to home that  isn’t terribly dependant on Tides, Fires, Droughts and Seasons.  I’ve had good days in all seasons, and all sorts of weird conditions.     Visiting  Charleston SC last week,  the window to fish there is very dependant on Tides.   The best fisherman live and die by them.    The Tarpon fly fishing near and around the harbor is starting to develop and there are large schools of big Jacks around too that nobody is really fishing for.    Charleston has gone through some weird changes having had 12 fly shops close in the last 10 years.   I did see a new one being built and currently there is only one left –  The Fin and Feather. The Forebay\Lake system has something to offer  In the worst conditions,  it can be an oasis of fly fishing.  In the worst of weather condition, you can still catch a dozen stripers and leave happy 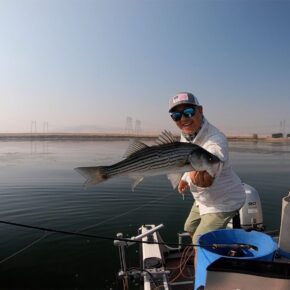 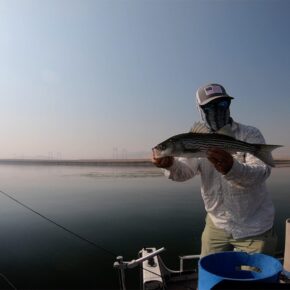 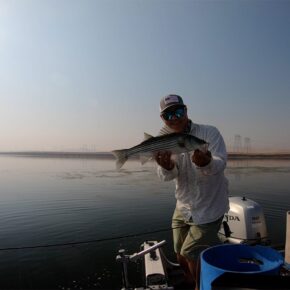 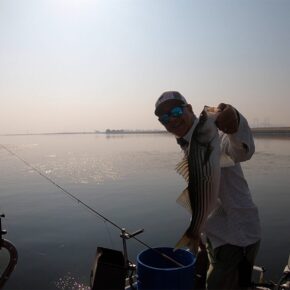 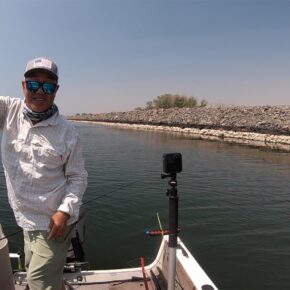 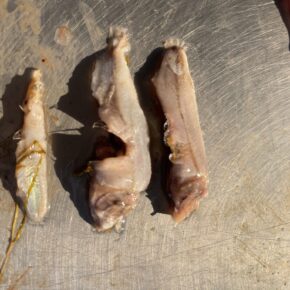 2 thoughts on “Smoke and Heat”

Another Fatty- the more weight I lose, the fatter

Forebay Fatty- something is in the water. Never