Its been two weeks since my last striper and I can’t stop thinking about my next shot at those big fish in the main lake. The problem though is the finicky winds that whip through Pacheco Pass–especially in the summer. I found myself calling the San Luis Reservoir Wind Line that tells you what the current and recent wind speeds are at the lake (209 826-9019). I call almost hourly as soon as I wake up in the morning till I sleep at night. The wind is almost always between 15 MPH to 25 MPH but I called the last great day perfectly. The best days occur when there is a rising change in temperature–in the summer that means a high pressure system moves over the bay area–also, there has to to be little to no marine layer (no fog). Just my theory. Last Saturday, I got up at three and went to the lake only to find the wind blowing 25mph at 6 in the morning, The wind lady lied. I drove back and had breakfast at Denny’s. I drove into my driveway at 8:00am and went back to bed like the two hours of  driving the boat around was a dream.

In my little 15 foot boat, even two foot rollers are menacing. At 20 mph, you’re looking at three foot rollers with white caps on the main lake.  Unlike the ocean which has currents,  the rollers on San Luis are usually constant and relentless when it gets windy,  but I have seen it recently look like a washing machine when the winds start to gust and change direction sometime more the 90 degrees.  I fear the San Luis winds ever since Mark Harrup, an experienced guide and fly fishing friend of mine who worked at the defunct San Jose Fly Shop died in San Luis when his boat sank near the trash racks in June of 2006. On average,  two deaths a year occur on the lake  due to intense wind conditions.  Because of Mark Harrup, I  now wear a life vest or have one at arms length, when I fish.   I never get in a boat at San Luis without thinking of Mark.  Thank you Mark.  Amber warning lights on the lake mean the wind is 15mph, red means its way to fricken windy to be on a boat on the lake (30+).

Last Thursday, I figured that Sunday and Monday might be good days on the main lake based on the rising temperatures all week.  On Saturday at 7:00 the average wind speed had dropped to around 10 mph from the last three days averaging 18 as the average temperature in Los Banos climbed.

Rick and I got to the lake at 7:00 on Sunday calling the wind line on the drive. The wind was 15 mph at 6:00 am and by the time we made it to the lake it was blowing around 16mph. We launched at Basalt and headed to the Bay of Pigs where the north east wind was shielded. There were no other boats out which made me nervous,  but the Ranger at the gate said that the weather would most likely be calm all day.  Right out of Basalt Launch we headed right and we caught a bunch of dinks and a few 20 inchers trolling flies. I decided to try out a new Walker Manual Downrigger I just installed on the boat last week. Having never fished one, I knew exactly what to do in theory, but it would be the first time I ever fished with one. On he way across the Bay of Pigs on our way to the 25-20 feet of water  where we fish with flies ,  I decided to go after those big fish 30 feet down in 140 feet of water on the fishfinder. I took a shad crank bait, casted it about 30 feet out and clipped it to the 6lb downrigger weight. I clicked the release on my baitcasting reel and dropped the ball down 30 feet which took about 5 seconds–much faster than I anticipated. The Garcia Toro Baitcaster had 5olb Spectra with a 3 foot,  20 lb flurocarbon leader. I put some tension on the reel and watched the fishfinder. I could see the ball weight  30 feet down on the fishfinder exactly at the level of all the big fish we were pinging. Within a couple seconds the rod tip went up and I grabbed it out of the rod holder and reeled up the slack to see what was at the end. As soon as the slack was gone, the line reversed direction out of the reel as if I were snagged in a moving boat. I cut the motor, jumped out of the seat and held the rod high to feel for the swimming fish. The rod surged in rhythmic one foot surges and I knew it was a monster. The line continued to race out of the reel even when I noticed the boats had glided to a stop.   There was a film of Algae on the surface of the water and it was easy to see that we had stopped. The line was still peeling out. I could feel the pumping of the fish’s tail and I knew it was alive and pissed.   About now I was thinking of turning the boat and running after the fish. I started the engine, turned the boat around and loosened the drag slightly.   Thats when I felt the reel seize. I looked down at the reel and the line was locked in under a loop deep around the reel spool. I jumped to the front of the boat with the rod flexed but high to gain some slack while  frantically trying to  untangle the line loop.   Within seconds, the fight turned into a tug of war –a dead draw.  With the 7 foot rod fully flexed it came down to turning the fish, ripping flesh or breaking something.   It seemed like a minute.  I felt the faint movement of the boat in the direction of the fishes pull. The boat was being moved by the fish. Trying to turn him like a tarpon, I changed the angle to the side. I once read that Billy Pate turned a tarpon when he ran out of line on his reel by jerking the fish around–like giving some slack and then violently taking it away to  unbalance the opponent.   If I could turn the striper 90 degrees, i prayed, I could gain line on him. I wasn’t to be. When it came off I had lost the biggest striper I had ever hooked.  I knew it was the hooks. The knots were perfect. Sure enough, the crankbait came back with one of the rear treble hooks flipping me off and laughing at me.  The fish had taken  200 feet of line out before it hit the whiplash deep in the reel.   As I beat myself up for not replacing those lame treble hooks, for not checking all the line on reel (especially those with Spectra). 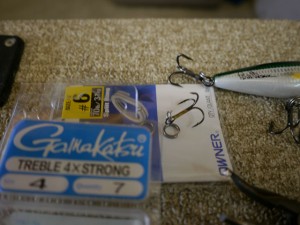 I reeled the downrigger up which I probably should have done earlier (this experience convinced me to order  an electric one).   The metal cable  came up from the deep  quickely–two feet per turn.   I put 16 turns on the handle in 5 seconds and the  swivel slammed against  end of the outrigger.   I felt the downrigger ball pop off the clip.   I must not have closed the clip properly because it was open.  The ball made a glunk as it sank to the bottom of the lake to add insult to injury.   With no extra downrigger weight (at $40 a pop), that would be the only downrigger fish I would have a shot at all day. What a baptism to downrigger fishing. Next time you know I will be ready.

The day was nice, despite. We landed and released about 20 fish and took home 4 of smallest keepers of barely legal length (our limit) for our wives.   We caught plenty of fish trolling and casting in the Bay of Pigs in the morning while waiting for the wind to die down to shoot over to Romero Cove where we got the big ones two weeks ago.  The wind died down around noon to less than 5 mph.  It was glass for about two hours.   We got to Romero Cove and trolled for about an hour over the same place we were two weeks ago without even a grab or a beep off the fish finder.  We then trolled the face of the damn in 30 feet of water, picked up two fish as we went back to the Bay of Pigs .   I did notice that the algae bloom was very thick on the surface of the water–visibility  was very bad around Romero bay  and the Dam.   The wind picked up to about 15 mph when we reached the bay of Pigs and it was now blowing from the east instead of the northeast.   We started to pick up a dozen or so fish as he trolled back and forth the east shore of the Bay of Pigs in the shallow (25ft) and clearer water.   We decided to motor back in  around 4pm  as the whitecaps got bigger.  The wind was in our face at 16mph with two foot rollers.

As long as I bring back a couple of those little stripers once in awhile, Gina is cool with my fishing addiction.  She  likes me to cook those 20 inch Stripers Chinese steamed fish style and what makes her happy is good for my fishing. Rick had a good time too.