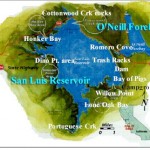 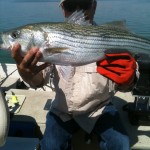 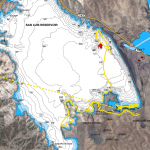 Imagine a huge windless lake with no boats except yours on a fresh warm Monday morning . Few shorefisheman, an empty boat launch at 6:30 in the morning with nothing to do but fish all day. A full tank of gas in the boat, fly rods, donwriggers, bait and time. Drinks food, and a 12 hour playlist of music. We landed two limits of stripers and Gina and I had one for dinner. Yesterday was a perfect day on the lake.

We landed 15 fish almost all over 18 inches (the minimum size limit for stripers). We caught them mainly on trolled flies but we also managed a 10 lbr on an anchovie while eating lunch at the trash racks. After launching from the Basalt Ramp, we decided to put the downriggers down and troll across the Bay of Pigs and up the dam face. We managed to land 8 fish between the ramp and the trash racks. The lake was down about 20 feet since the last time I fished it. The water we trolled in the morning was deep green–evidence of a huge algae bloom. We trolled as close to the wall as possible (500ft) but we were in 80 feet of water–I wanted 25. Near the trashracks there is a pocket of deep water directly in front of the rack thats about 185 feet deep. We set the downriggers to 80 feet since we were getting pings at that depth. Our old honey run, the run from the trash racks to Romero cove–did not produce, but we managed to view the fishy looking structure that was submeged 20 feet in July, now sticking ten feet above the water. No wonder we did so good three months ago in July. The entire run had changed and no fish were marked on the finders. By noon, we camped out in front of the trashracks and I threw out an anchovie. Within minutes we had a 10 lb stiper.

With the lake so calm, we decided to troll Lone Oak Bay for the first time. From the boat ramp to Lone Oak Bay we caught over a dozen fish, nothing large but constant action. With wind, I dont think we could fish that area.