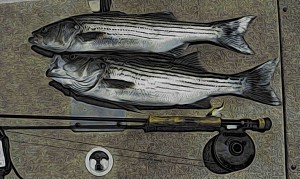 I knew in my gut today would be different at the lake. The Solonar tables showed a major period from 6 to noon, the cows were feeding in the grass on the way up. It was going to be epic. the first weird thing I noticed as I pulled over the rise and caught my first glimpse of the lake around 6:45 was the lack of crowds, cars and wind even thought the Wind line indicated a 10mph NW wind, the lake was glass. Then I saw it–a huge reflective light in the sky across the lake above Portuguese Cove. I saw people pulled over looking at it but I didn’t really give it much thought till I pulled into the boat ramp at Basalt. I had my Lumix GH2 with a 14-140 lens so I decided to take some video of the thing in the sky. The enlarged frame grab looks like a giant set of white trousers. It was weird that the thing did not move with the breeze. I could see the wind generators spinning on the north side of the lake. The object did move but not with the wind. I watched it while I fished until about 8:00 and then I couldn’t see it anymore. It left. ET phoned home. Apparently I was not the only one who saw it.

The fishing was great today, I fished 6 hours and caught 10 fish casting flies and couple more trolling. The Bay of Pigs is starting to shape up. Early in the morning, a bunch of stripers chased shad into a the north cove of the Bay and the bait fishermen got limits early and left. I fished the shallow flats around the brush piles and got some nice fish. Also fished the coves north of the launch and found fish casting right to shore in 5-10 feet of water. The water temps is now at 62 degrees and the fish are pairing up. I saw numerous follows and small schools of stripers swimming in the shallows. Not all were agressive though. Fast strips with pauses on a rattled white and chartreuse marabou streamer tied on a jig hook.