After Greg Moon cancelled our Halloween red fishing trip due to strong winds and rain, I decided to use the day to check out the WW II Museum. Nick Gray, my Father in Law, landed on Easy Red, Omaha Beach, in the first wave on D-Day. I wasn’t prepared for how emotional the experience was, World war II resulted in the deaths of 60 million people all over the world–the biggest war in the history of the world. The soldiers that fought that war, like Nick are almost all gone. Nick is 97 this year and earned a Bronze Star on that beach on D-Day. I often think how different my life would have been if he had been killed that day like the majority of his battalion – no Gina, no Mark and Mia. I took a bunch of photos with my new Lumix GX7 and a 20mm pancake. The lowlight was great and the small footprint camera was a joy to use. There were many people teeing up full size Nikons on tripods taking the same pics I was taking. I think the best lens for this type of shoot would have been an 8mm fisheye pancake. I had to back up a bit with a 20mm. 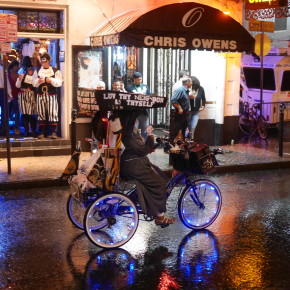 Gina and I spent Halloween night on Bourbon Street watching the parade of weird and unusual people milling around in the pouring rain getting drunk. John Iverson called and offered to take us out for half a day tomorrow which we jumped on. It was raining so hard at 10PM I thought we would have a terrible day tomorrow. We had a great dinner at Antoine’s and hung around the French Quarter hopping bars till midnight. Gina and I ran into a few Northwestern friends in NOLA – Alonzo Bell, and Dr and Mrs Potato Head Mark and Wendy Heinz. We dined at a restaurant called Restaurant R’evolution, a Cajun Creole restaurant in the French Quarter that Melanie Syn (Wayne’s wife who went to school at LSU) hunted down. One of the best meals ever. The whole culinary experience in NOLA was overwhelming especially for Gina and I who are seafood, raw oyster addicts. Oysters are our crack addiction. Foursquare got a workout.

The morning after Halloween, we got on the water around 10AM and as John predicted, the blue sky and sun came out by 1:00PM. Two days ago, the weather forecast was dismal and, lucky for us, wrong. We caught lots of reds and drum with great visibility for about 3 hours. John was busy on his day off. He rebuilt his trademark casting platform\stripping basket and bought a longer push pole. It was fantastic fishing on that platform. Managing your fly line while red fishing is critical to success. Short casts, big fish, and lots of line out of the reel is normally a recipe for disaster which makes Johns custom stripping basket platform an ace in hand. Definitely, the fall red fishing in NOLA is fantastic if you luck into the right conditions. We saw a lot of what John called “Big” redfish. I think a Big Bull is anything between 15 and 25 lbs. A post on Dan Blanton’s BBD alluded that there were lots of 25-40 lb redfish on the flats the days we were fishing. We didn’t spot any and the thought of a 28 lb redfish is a bit exciting considering we boga’d a 28 lb Black Drum that I could hardly lift, let alone hold horizontal. Those are big drum on a fly rod. By the second day, Wayne and I got a feel for landing big redfish and made quick work of landing reds and drum that were 10 plus. I think Stripers actually fight harder but nothing beats the thrill of sight fishing those reds and watching them eat a big flies from a raised platform. One redfish I stalked and farmed, hit a fly three times before leaving. Wayne caught several that opened their mouths wider that some of my dental patients.  A lesson learned by me this trip is to practice casting short, and practice throwing a fly with accuracy with the left hand. The art of the short cast with a ten weight is learned and something I hardly practice.  Most of my shots at over thirty feet were accurate.  It became un-nerving when a fish got ridiculously close and you had no time to false cast and only one shot with John gently harassing you to cast and strip better. We ended up the day catching our last redfish 15 minutes before our early exit at 3:00pm.  Had we not promised our wives that we would be back at 5:00 to make the dinner reservation at Revolution in New Orleans, we would have had a couple more hours of great fishing.  It takes 2-3 hours from the last cast to the hotel depending on trains, draw bridges, and/or rush hour. 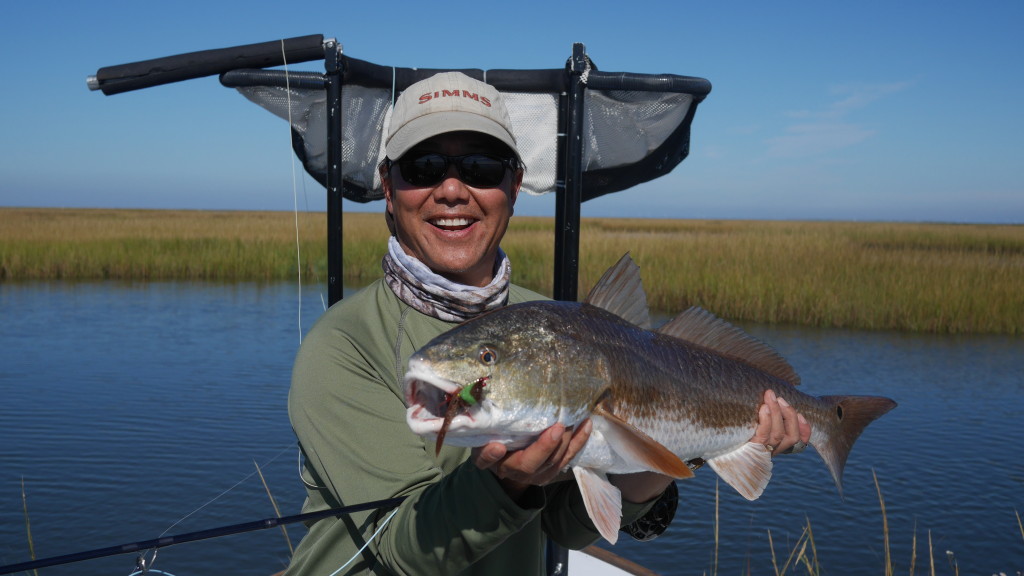