Hawaiian bonefish experts mostly agree that Oahu has the best bone fishing flats with Molokai a close second. Some of the biggest bonefish in the pacific come from the waters off Hawaii. 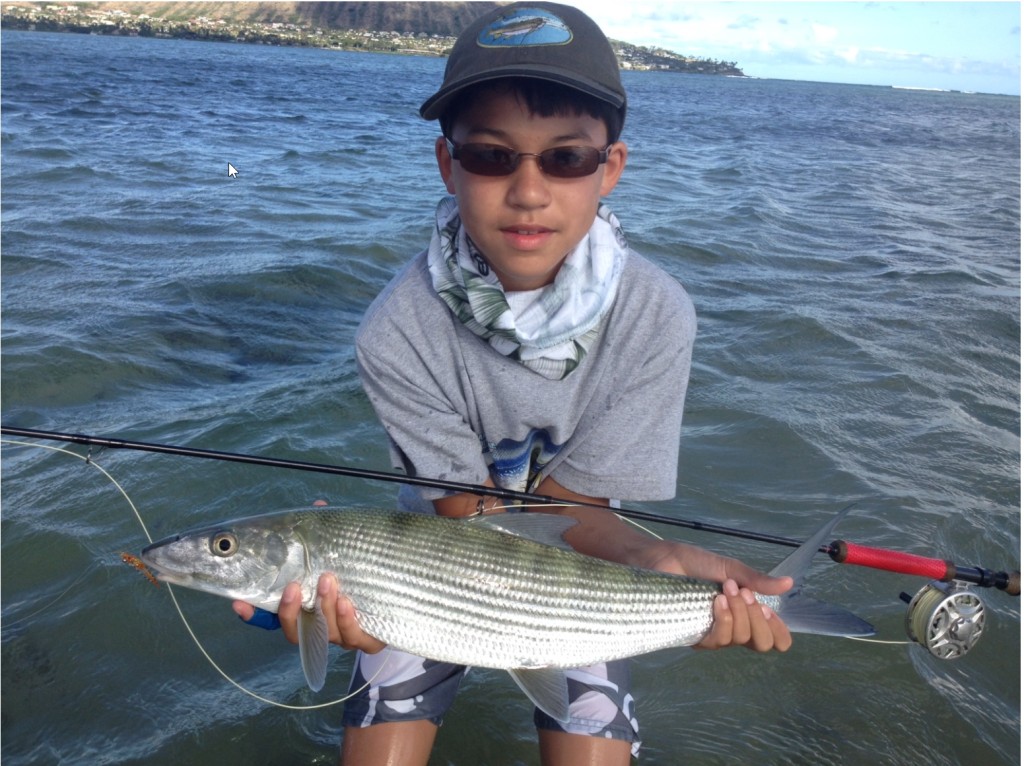 Its been too long since Gina and I took off alone for Hawaii. As I planned my return to Christmas Island a year ago, Wayne suggested we meet a couple days early in Oahu, to explore before catching Fiji Airline to Christmas Island for a week of Bonefishing. Initially I thought Gina might enjoy the adventure of a “Survivor” like trip to Kiribati but she passed based on the bathroom conditions and expressed some interest in visiting Pearl Harbor. Gina is a big WWII historian ever since traveling to France for the D-Day 50 year anniversary with her father Nick who is a decorated D-DAY vet. She can be seen approaching men in uniform and thanking them for their service and she cries in military cemeteries.

We had two and a half days to explore Waikiki and we made the most of it. The first day we arrived, we walked the Waikiki strip and beachfront which was full of great ocean side five star hotels and shops. The main shopping strip looked like Rodeo Drive and there were tons of Japanese Weddings going on. Gina and I have in the past avoided Oahu thinking it might be too commercialized and thus not much fun but I’ve changed my mind about the island and now think it has something great for every person in the family. We heard stories of the heavy traffic and a couple years ago, researched the Disney Aulani Resort and decided to pass on the Island for our familiar Maui destinations after it seemed there was not great surfing on the island. After graduating from Leland High two years ago, Mark had a wild weekend of fun in Waikiki for his senior graduation trip. We heard stories from him about how fun it was and how much there was to see but began seeing the island as more of a young persons “Spring Break” destination. He also mentioned the surfing was better than expected. Since Oahu is a first stop to fly to Christmas Island, I had visit the island 5 time before and never really explored it. I had not explored Pearl Harbor and so Gina and I decided this year to make a long weekend in Waikiki before heading in different direction. 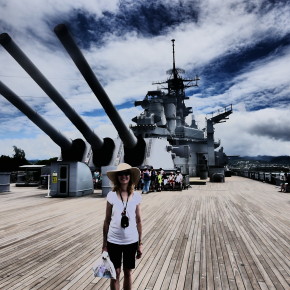 We stayed in the heart of the strip off the beach at the AquaWave hotel–nice hotel but great location– and rented a car from Enterprise for a couple days. We spent Sunday starting at 6AM touring Pearl Harbor. We saw the USS Arizona Memorial which you need to get to early if you want a morning tour. The tickets are free but they only have 2000 a day and its first come first serve. They typically run out by 10 AM. Don’t let that discourage you though since the USS Bowfin Submarine, the USS Missouri and the Pacific Aviation Museum are pay exhibits that can be seen anytime. The tour is as good as the WWII museum in New Orleans and just as big. We spent the entire day there , returned to the hotel to meet up with Wayne and his kids for dinner. There are many excellent restaurants in the area and the place is busy till late in the night.

On Monday, we woke up early and drove to Diamond Head to hike the summit. We reached the summit by noon and had great views of the Waikiki area from the top. Being big fans of the TV show Hawaii 50 it was a must do. On the way back, we headed over to the Punchbowl National Cemetery-a awesome 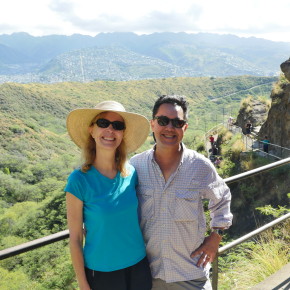 memorial to all the lives lost in the WWII Pacific Theater, Korean and Vietnam wars. Gina was emotionally drained and it was hard not to be moved walking the rows of grave markers reading names of fallen soldiers from all over the country. Our country’s freedom and way of life comes from the sacrifice of the men and women who died years ago. I feel strongly that all citizens should visit the National Military

Cemeteries often to remind us that our freedom and our way of life comes at the cost of human life – which resets our perspective when it comes to our country and what makes it unique and great.

In the afternoon, we decided to take the last Red Bus double decker tour of the Waikiki area. It was a good experience to note for the future since you can get off and on all day long at the best places in the area. At 20 bucks for the whole day pass, you can get to the 25th largest shopping mall in the world in ten minutes or go to 5 different Hawaiian Ice places. 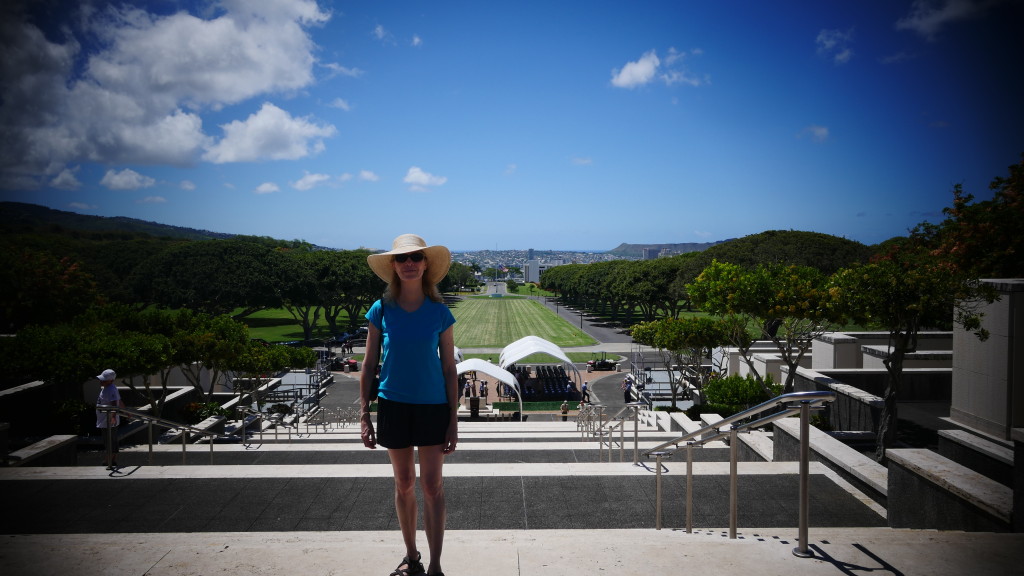 Wayne and his kids took a different direction and tried fishing the flats on Ohau for bonefish. Incredibly, Mathew caught his first bonefish in Oahu-an 8 lbr on a public flat not 20 minutes from the hotel. The Nervous Waters Fly Shop has information on the best local flats and is located close by. Most Hawaiian fly fisherman agree that Oahu has the best bone fishing flats of all the islands. 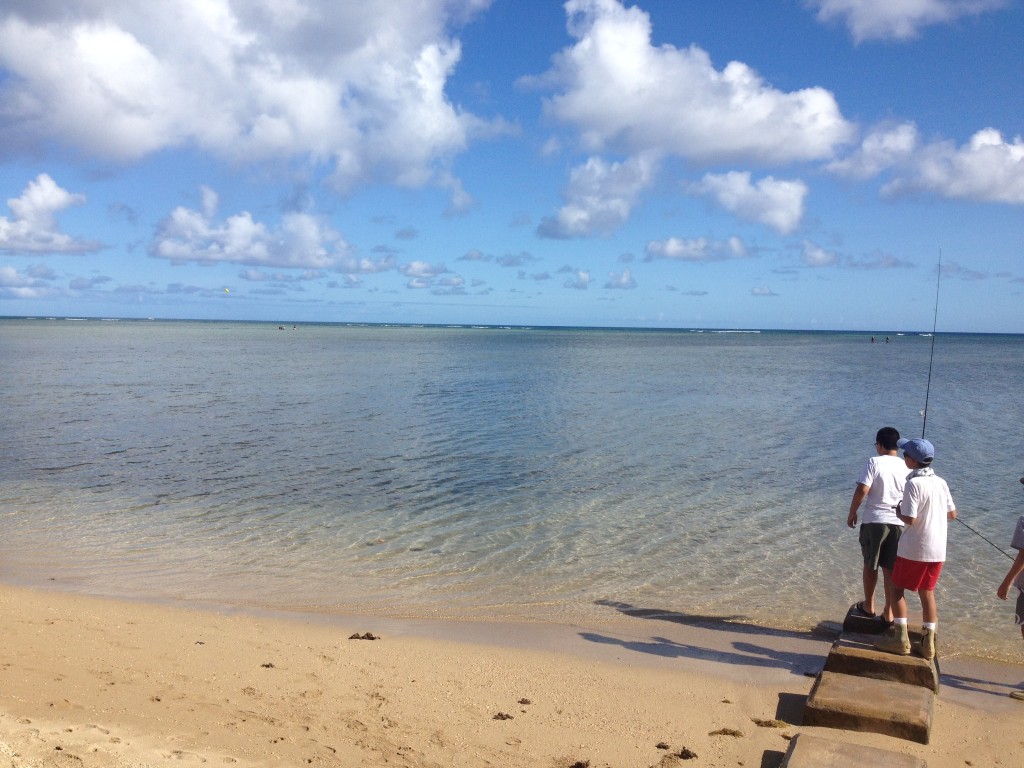 I think that our next family vacations to Hawaii is going to be to Waikiki for its great beaches, good surfing, wonderful restaurants and world class shopping and best of all, local flats to fish for me! Something for everyone in the family. Even Disney agrees.

Check out our favorite restaurant find in Waikiki 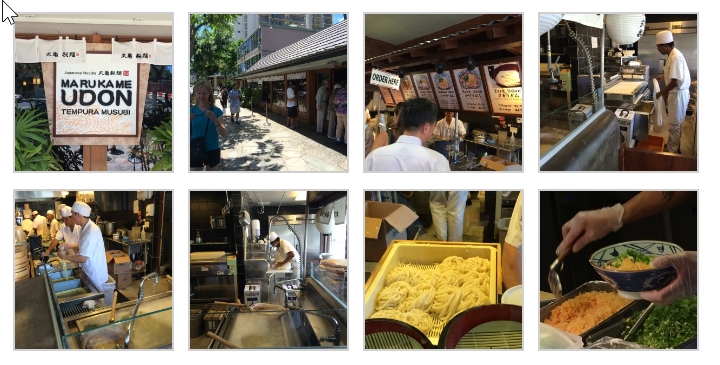