It’s been three days since I pulled on a striper and I’m having withdrawals. It wasn’t that long ago I was in a slump. I was fishing all of May wondering when the slump would end. This month, Im wondering when the hot fishing will cool down. Fish while the fishin’s good because you never know what changes are ahead with the water supply and the drought.

The weather (wind) pattern over this weekend was nothing near what the “WindAlert” app on my iPhone predicted. After Fridays great calm day, I had intentions of going back Saturday thru Monday but the wind didn’t cooperate. Saturday was windy all day according to Steve H. He said he couldn’t hold his boat on “the spot” because it was so windy at 11:00am. I tried to go out Sunday but it was actually blowing 30 mph in the morning and I didn’t want to take a chance. I should have though because it was calm all day after 11:00 AM. This morning, I woke up and the wind was blowing 10-20 mph. It was my last opportunity before the work week and I went for it despite the overcast and high winds. Im glad I did.

I got to the lake a 7:00 and the wind was gusting enough to push my boat around on the pass. I called the wind lady while driving and the wind was actually building buy the time I launched a Cottonwood Boat Launch at Oneill Forebay. The Launch and main body of water was relatively calm but to the east, you could see white caps coming down the channel from Check #1 (the bridge) to Check #13 (Medeiros Outlet). I fished the “Pumping Plant” holes and picked up a dink but it was slow even with an occasional school on the fish finder. I motored over to the rock wall at Medeirios and two boats were in my spot so I fished the south side of the channel along the weeds using my IPILOT to navigate an offset to the weed beds. The IPILOT was very impressive in the wind. There is no way I could have manually manuvered exactly 75 feet from the weed edge without trimming constantly while fishing. I caught three good fish over 20 inches on that run- one looked like a football. I fished the Rockwall after the lure guys left and picked up a couple more right on the bottom. The wind and current made fishing the channel like fishing a stream. Casting upstream and letting it sink till it was in front of me, I caught most of the days fish stripping the fly up from the bottom. Around 10:00. I decided to try the islands even though it was blowing hard. Despite the wind, if you could get a drift and strip right on the bottom, it was a sure thing. All the fish on the meter were right on the bottom, and I think I finally figured out how to catch those fish. Getting the line all the way down takes some work. I was never a big fan of counting to 25 but mending line upwind and up current helped sink it faster. Once on the bottom, I would confirm that I was there by stripping really slowly and ticking the bottom while moving the fly in small sharp movement while keeping contact with it . Small strips kept the fly in the zone longer and I could often feel the fish playing with the fly on the pause. Setting on those erratic ticks almost always resulted in a hook up. Many of the fished hooked today hit very softly on slow retrieves or on the pause. Very few hit it hard on the strip. I caught and released over 30 fish in the slot that has been so productive for the last week. 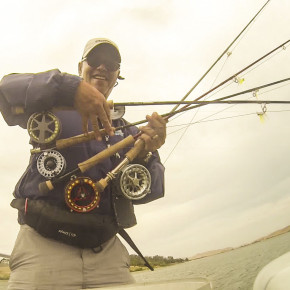 By 11, I was the only fisherman on the lake and had caught enough fish to make me happy, I decided at 11am that I wanted to try something different so I decided to try catching a striper on every rod in the boat. I carry a 9ft 5 wgt. Sage XI3 for bluegill and crappie, A 9ft 6wgt TCX , A 9ft 7wgt Method, and a 9ft 8wgt Helios 2. I tied on variants of my favorite fly–a yellow closer and in less than an hour, I managed to catch a fish on each rod in order. I must confess that I liked the 6 wgt TCX the best. The 6 wgt seems to cut the wind better than the 7 and 8 wgt lines. and a small striper on that rod takes you for a ride. Plus it has enough backbone to set the hook unlike the 5wgt which I had to strip set. In addition, thinner running line seems to sink faster and getting to the bottom as fast as possible was paramount today. I guess you could call it an equipment SLAM. It was fun and challenging. The lighter the rod, the more you had to mend to sink the fly, plus setting on a striper with a 5wgt trout rod is tough–I missed half a dozen soft takes. Despite the wind and clouds, I had a fun day. I read about a guy who is trying to catch every species of fish on a 4 wgt. There is a point where those light rods are more like a hand line that a fishing rod. I might try a 4 or 3 wgt next week for kicks. Also, today I decided to by one of those new Sage Salt fly rods–specifically the 5 wet for the boat. Maybe its stiff enough to set on a striper.