Thank you Wayne for taking care of the arrangements for a  fantastic day with my son flyfishing for monster rainbows near Red Bluff.   Every year, Confluence Outfitters auctions off the opening day of flyfishing on Eagle Canyon Ponds (formerly known as Lassen Trout Ponds).  I saw the auction,  but Wayne actually bid on it and won.  It’s a great place to fish for big rainbows with a few friends and its only a four hour drive from San Jose..   I recall the first time we fished it– over 20 years ago with Wayne and Bret Jensen –and even then I had flashbacks to the trout pond at Frontiers Village in the 70s. There are those who say that its like fishing in a hatchery, and there are those who say the fish are ugly and don’t fight. To those who look down their nose at managed catch and release trout fishing, its the future– better fishing through fish genetics.  Besides that,  its a great way to train and it’s great fun.   The fish at Eagle Canyon can be challenging to catch at times. And, if you don’t have the time or budget for Jurassic Lake and you feel the need. then need for weight on the end of that trout rod,  there may be no better place in Northern California and only a four hour drive.

Some still captures of our first time in 1991 – Wayne , Meng, Jerry, Dan Dee and Bret Jensen 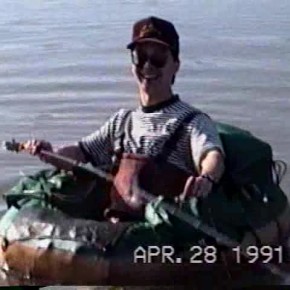 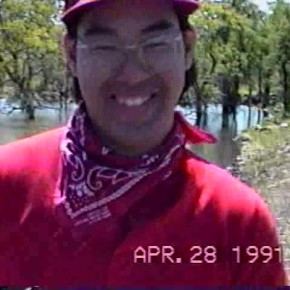 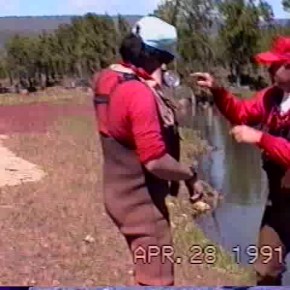 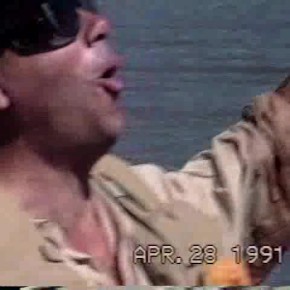 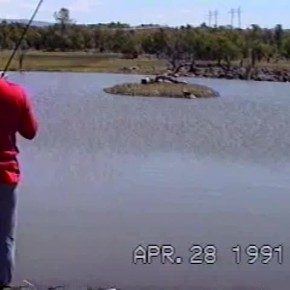 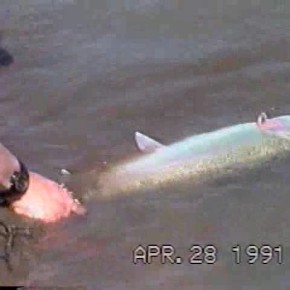 This year’s triploids were big and feisty. Though we didn’t catch as many fish as we had in past opening days, the fish seemed to average bigger. The day was beautiful, a bit cold in the morning but clear with no wind or clouds. Along for the experience were Wayne and his boys, Matthew and Michael, my son Mark, Papa Jon Leonard and his son Little Jon, and designated catcher-father-friend-grandpa Benson. If I were a fish in that pond I would have been scared.  At the end of the day, we caught around 100 fish and I don’t think there was much more in the ponds which led me think we caught a few twice. The first hours of the day was pretty crazy in terms of numbers. The fish were so big, it still took a long time to play, land, release and resuscitate the fish. The fish went “native” later that morning  and the stillwater tactics came out around 11am–small nymphs, longer leaders using hover lines, indicators and small bugs. The fish stopped hitting fast moving streamers in the morning after about 40 fish were hooked.  On the other hand, I think my Drone might have freaked them out a bit.  Bensen thought the drone looked like an Osprey when it hovered and probably put the fish down. It happened twice with each flight of the drone–suddenly the fish stopped hitting for a period.   My son Mark hadn’t fly fished for over a year, and after his casting skills came back, he managed to catch 6 fish.  Last time here he only caught one but it was about 15 lbs. The average fish  this last trip was around 10 lbs with some of the bigger ones 15-18. The boys lost some huge ones that may have been 20.  . Most everyone was fishing with 6 and 7 weight fly rods with 2x tippets to begin with. Later in the day we went down to 3X and 4X.

Filming the ponds from the air with the drone was interesting and fun.   The DJI Phantom2 Vision did a pretty good job of filming fish in the water.   I added a polarizing filter the the Stock Camera by adding a ring.  After editing the drone footage and seeing on film what I didn’t see through the real rime monitor,  I’m convinced that upgrading  to a three gimble stabilizer, shooting in 4K and upgrading the resolution of my real time monitor,  I would have been able to position people over the fish and we might have doubled our numbers!.    I think that I should also look into  HD eyeware .   THere is some skill needed to fly a drone with eyeware alone.  Its like sitting in the drone though.  Recently a patent of mine though that was cheating, but I told them about a trip to the Skeena River,  where the helicopter pilot flew miles of river until he could see schools of salmon and steelhead from the air before he put us on the river.   I think a system like that could come in real handy on the Delta or San Luis when the fish are on the top like they do once in awhile.

While at Wayne’s, I had a chance to cast some nice fiberglass rods. I been wanting to buy some shorter fiberglass rods to fish small creeks and pond with.  My current philosophy of using longer lighter rods –10 foot 3,4,and 5 weights–made me forget how much I liked fiberglass.  I built over 100 rods at the begining of my flyfishin career and I still have hundreds of fiberglass blanks in the attic.  Wayne introduced me to some McFarland fly rods .  After  casting a Butterstick, and  Winston and a Scott, it was clear that the McFarland was a better casting rod.  I forgot how great a fiberglass rod could feel. I will definilty be sporting some new fiberglass this coming trout season.   I also got a chance to hold and feel a Maurice Noel Fly Reel. I though I had seen the best reels ever made till I held that reel. I was wrong. It just might be the finest fly reel ever made.
Eagle Canyon is always a great time with my friends, relatives and son. Fishing with Mark is a rare event with him being so busy with school. This past week he passed the National EMT advanced exam which sets him up to get a better paying job in Eugene. There are only 65 Advanced EMT licenses in Oregon. . That should help him accrue some clinical hours that he needs to apply to different post grad programs. Mia is flying to Columbia University to interview for their PH.D. program. Gina managed to get Nick, her dad, reclassified by the Veterans Administration to 70% so he can now get full aid from the VA. We have been praying for that. Now it is a matter of finding a great place for him to live his life out at 98 years of age. When Im 98, ill be watching these old fishing videos and remembering the old days.