The weather forecast last week for Northern California was RAIN RAIN RAIN for the weekend but around Wednesday, I noticed a lag forming between storms that would give me a good 6-8 hours on Oneill Forebay this morning. I called Steph and Vaughn but I think they were convinced it was going to be bad weather. South east winds at 10 mph usually are completely blocked by the foothills and now that they have permanently removed the wind line which use to give me real time wind conditions to compare to the weather models, I spend my time during the work week trying to figure out when the best conditions will be on San Luis and Oneill Forebay for the precious weekends. Having two bodies of water to fish at drastically different elevations is such an advantage when it comes to unpredictable wind and rain patterns in and around Gustine, CA. When the lake is storming, the forebay can be calm and visa versa. It all depends on the wind directions.

I woke up at 6am and checked the realtime weather at Gustine and it was exactly as expected – 10 mph SE which means the Forebay would be glass. As I approached Pacheco Pass at around 7:00 the signs were warning of gusting winds on the pass. I was pleased to find the lake and forebay calm even though the windmills on the pass were spinning pretty fast in the southeast wind. There were tons of fishermen at the forebay in the morning. At least ten boats, a dozen Kayakers, and the shores seemed to have lots of bait fishermen. Water temps are in the high 50s and the Lake is almost 50% filled! The highest Ive seen it in years thank god. I cant wait for the fish to start hitting in the lake. I still remember fishing the trees on the shoreline, and the rocks at Cottenwood which have not had water near them in years.

The fish today were not aggressive. Probably the low pressure and storm front approaching wasn’t helping. The solonar tables were good today and the winds were very light all day. The water clarity was a bit muddy but I could see my prop. The morning was pretty slow, I caught one fish an hour till 11:00 and then the action picked up to about one fish every half an hour.   I landed 15 fishing from 8am to 1PM fishing small craft fur yellow and white rattled clouser  with pulse discs behind blue and white angle hair minnow patterns. I like fishing two flies when things get slow and visibility is low.  I caught equal amounts of fish on the dropper as I did on the lead fly. The numbers were good but it seemed that there was alot of time between fish and I would say that it was tough fishing. Half of the fish caught were over 18 inches with the biggest a bit over 20 inches. The fish were in 12-20 feet of water in med size schools chasing bait. Im getting good at differentiating schools of bait vs stripers on the 360 sonar. I dont think I would have caught as many fish today if it were not for the 360 unit directing me to cast and move with the fish. Its hard to prove that though.

Many of the bigger fish were caught while slowly dragging the fly on the bottom.  Almost like crawling the clouser with a trout strip on the bottom.  Come to think of it,  I think the pulse disc from Brinefly Innovations really helps give the fly some action during a really slow strip or short jerk.  The sideways movement of the fly that I was trying for weeks to perfect with rear weighting might be good for hard strips but the pusle disk is really effective at “walking the dog” on a slow short strip on a neutral density fly.   In the video  at 1.06  I hooked fish after a short 2 inch strip following a  a long pause.  James Matson of Brinefly is a very innovative salt water fly tyer and a really great guy.  He has some great stories to tell about pulse discs for fish all over the world. 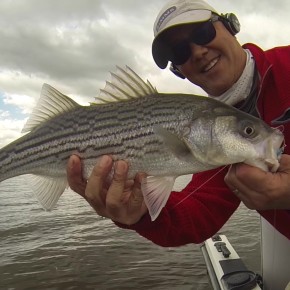 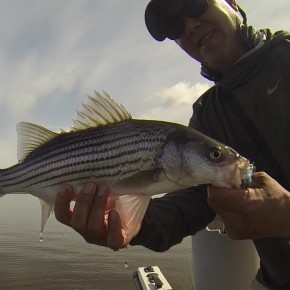 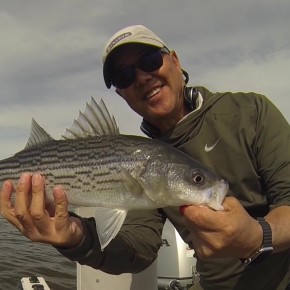 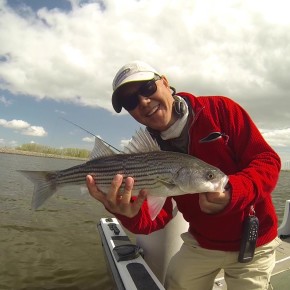 LAST YEAR ON THIS DATE