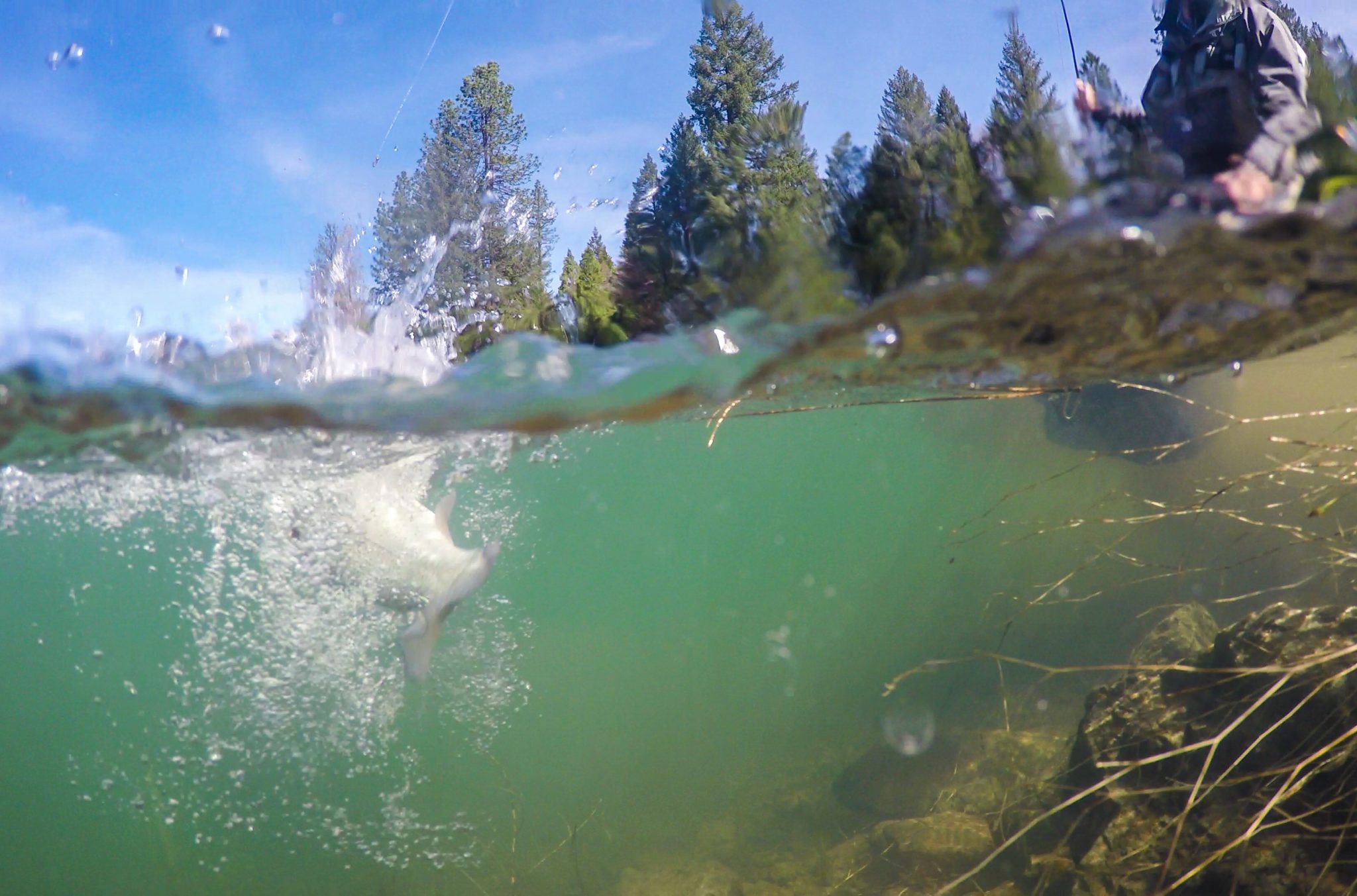 The best thing about fishing Henderson Springs, a 500 acre fly-fishing lodge in northern California, is the variety of lakes and streams you can fish.   Often you can find yourself alone on one of 5 lakes and ponds.  If you get bored or frustrated with one place,  you simply hop in your vehicle and in less than 5 minutes,  you are in a new lake.  Mark Henderson has owned this facility for over 40 years and has done a wonderful job of maintaining the habitat.   Recently, he successfully established a Hex Hatch in some of the ponds and with this years great rainfall, the lakes are all full and healthy and it should be quiet an experience come May.  Also,  he has kept the stocks of fish high in all the ponds with some as big as 20 lbs.  The largest fish of the trip was caught by Norm Sauer weighing in at 12 lbs, my largest was around 10.    A couple first for me, this being only the second time there, was the dry fly fishing, fishing chironomids from shore with a 3 wgt Spey Rod and using a pulse disc with seal buggers on intermediate lines.  It was a great three days  that I look forward to doing annually,   The staff at the lodge is great.  The group of six were slightly different than last year,  and some of the nicest fly fishermen I’ve met.  The meals were worth leaving the lake for as well.  In the evenings, we watched the Finals of the College Basketball Tournament, and the Warriors play the next night to an unfortunate loss but its was great having those things there and in the perfect setting.

I was impressed how the trout at Henderson could hit a fly stripped at Striper speed with a pulse disc.   They love that fast erratic action.  Doing the AB test with a seal leach, one stripped slow and the other with a small pulse disk stripped fast and erratic, it was no contest.  The fast stripped pulse disc seal bugger out performed the slow stripped one 3 to one. I bet you could make a really tiny one that would fit on a size 14 nymph.  Im becoming a big fan of pulse disks.

One morning while we were preparing to fish, one of the fishermen drove a #12 hook to the barb into his palm through the hook keeper pinning the rod to his palm.  After cutting the leader off the fly,  the fly wouldn’t fit through the keeper.  Luckily,   I always carry a hook removing first aid kit with WIRE CUTTERS and we managed to cut the fly in half, sneak skinny half of the fly through the hook keeper freeing the rod from his palm and half a fly buried in the fleshy part of his palm. I did the string yank with a hemostat attached to the cut hook.  The Hemostat gave me something to leverage the hook away from the barb. .  I think its essential to have some wirecutters in the first aid kit at all times,  even if you are using small hooks and definitely if you have any treble hooks in the boat.  You can get a bunch of cheap good ones at Harbor Freight..

What a weekend for Bay Area Sports.  The Giants Beat LA 3 of 4 games with a Pence Grand Slam, a rookie Walk off homer, and a MadBum homer. Mia and her boyfriend Ryan were in the bleachers for Fridays win.   The Warriors beat  Memphis on Friday trailing by 10 points with 6 minutes left.winning by one point.  And , Sunday the Warriors beat the second best division team – the Spurs- ending there home winning streak and equaling the Bulls for the most wins in an NBA Season.  Finally,  at the Masters today, Jordon Speith in an epic choke, collapses at the masters with a double bogey on the final hole 12.  Yikes, talk about a big divot….