Steve and I spent the day fishing Oneill Forebay today on what turned out to be a spectacular day. There were lots of fly fishermen on the lake today. Ken Oda and Mark Won were on the lake as well as a dozen other regulars working every corner of the lake. Steve and I started out fishing the 152 channel edges and did well on topwater in 10-8 feet of water with lots of fish working schools of minnows. When the sun got a bit higher around 9:00, the action slowed down a bit and we searched the deeper water thinking the fish might have moved out like they have in the past. We metered very few schools in the 15-20 feet trenches and went to the channel edges to look for fish. We found a dozen or so fish right at the 152 bridge fishing slow flies on the bottom but that eventually ended and we were on the search again. On our way out of the 156 channel, I decided to try some holes in the shallow flats east of the 152 channel. We got into them heavy for the remainder of the day and left around 3:00 worn out. The fish in the flats were almost all 17.5 inches long but we released half a dozen keepers and saved a pair for dinner. It was a fun day that I really needed after going fishless for two weeks in the big lake.  Its a pleasure to fish with Steve who at 85 and can learn new techniques and be very self sufficient in the boat.  Its tough to handle mono shooting line, cast t14 without injuring yourself, and land stripers by yourself without drawing blood.   He still has that passion for flyfishing even for dinks having been all over the world flyfishing.more times than almost anyone I know.

Use the mouse to scroll around while the  video is playing. ….
I was very excited to try out a new camera –the Nikon KeyMission 360 The small camera is a shockproof and waterproof spherical 360-degree action camera that records a stitched 360 4k video that you can view in virtual reality or with 2D 260 media Viewers like GoPros VR Player. I mounted the camera on the windshield but I think it would be really cool to mount it between the fishfinders and the stern so that you can rewind and playback the images on the 360 sonar and donwscan at the same time the fish is hooked. It sure would be a great way to learn how to ready the fishfinders. The 360 camera has lots of applications in fishing and drone photography. I loaded into my VR HTC Vive and it was almost like fishing. I can imagine that if I every get to old to move or fish, I could relive an old fishing trip in Virtual Reality. It would be better than watching tv. Like the Gopros, you can loop record a 5 minute session and I can power it from the boat batteries but you need a 12 volt to 5 volt usb converter that puts out MORE THAN 2.1 amps to do this. I have to say however that the bluetooth and wireless linking necessary to operate the camera is a pain in the ass. I can’t believe Nikon didn’t figure this out better. Bluetooth linking on an Iphone only works if you forget the device and link only from the app. With bluetooth only, you can change the settings on the camera but if you want to remote view, you need a dedicated WIFI connection to the camera as well as the bluetooth. You can see by the quality of the film, that the 4K pertains to the total image and not to the viewed image, but its not bad for an all in one small waterproof 360 cameras. It also takes great stills that can be viewed with web and desktop viewers and when you push the camera button, you have the option of having the camera countdown before taking the 360 picture to you can pick up your fish and smile.  This is my first edit of this kind of video and I can already see some issues I need to deal with.   The seam between front and back is way thicker than the samples that Nikon posts.  I found out that its due to the heavy duty dive lenses I put on it.  I need to replace those.     Also,  transitions and titles are a bit tricky since the video viewer wraps the 2d film creating some distortion on the transitions and titles.,  Im sure there is a Final Cut plugins that lets you see the distortion while editing. 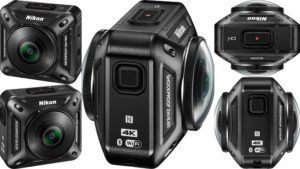 I still like higher resolution 2D  but this is very interesting .

While posting my 360 video on youtube which for now is the only one who supports these types of files,   I found some interesting video of San Luis.   Check out the surface action on the main lake early in the morning in October.   I know I was fishing on the lake around then and I never saw anything like this.   It only happens at the break of day.   I need to get there at daybreak to see this.