The forebay was empty today except for me and Tubin’ Louie.  I finally met Tim Anderson a couple weeks ago fishing with Luke Sing and it was a meeting long overdue.  Ive seen him on the lake for years and he fishes the forebay almost weekly.    After exchanging phone numbers with him,  we ended up on the lake together today and had a chance to chat and fish our boats close over a big pod of stripers in the flats.    Tim has skills.   In a couple hours,  we had caught at least 15 fish between the two of our boats.   As it turns out,  Tim has fished the St Mary ‘s and we have many common flyfishing friends.

It turned out to be a great day with mild wind and overcast.  A weather front is moving in tomorrow and the rains are coming for next weekend.   The fish are starting to slow down.   No more aggressive follows and multiple shots on the same cast.  The water temps are in the low 50’s and weeds are almost completely gone.  I didn’t spot a single topwater event today either.  Even though the fish are generally smaller in the Forebay than the reservoir,  I love practicing on the forebay.   It is a technical game that sometimes requires good casting, working electronics, proper fly selection,  just the right retrieves and a working understanding of the biology of stripers . The main event of course are the big fish in the Reservoir and the Delta but the forebay is the gym for me.    Fishing the forebay keeps  the casting efficient,  the reflexes frosty. and I dont get tired of that strike and set.   I ended the day with 28 fish and headed in early around 2:00.  I didn’t catch many keepers ,  but I measured lots of 17+ fish today.   The sonar is starting to come in handy now that the weeds are dying down and the water is clearing up from the algae.    I caught several fish aiming for sonar blips and Tim and I managed to stay on the fish longer making the right boat moves in the flats to keep tight thanks to the 360 sonar. 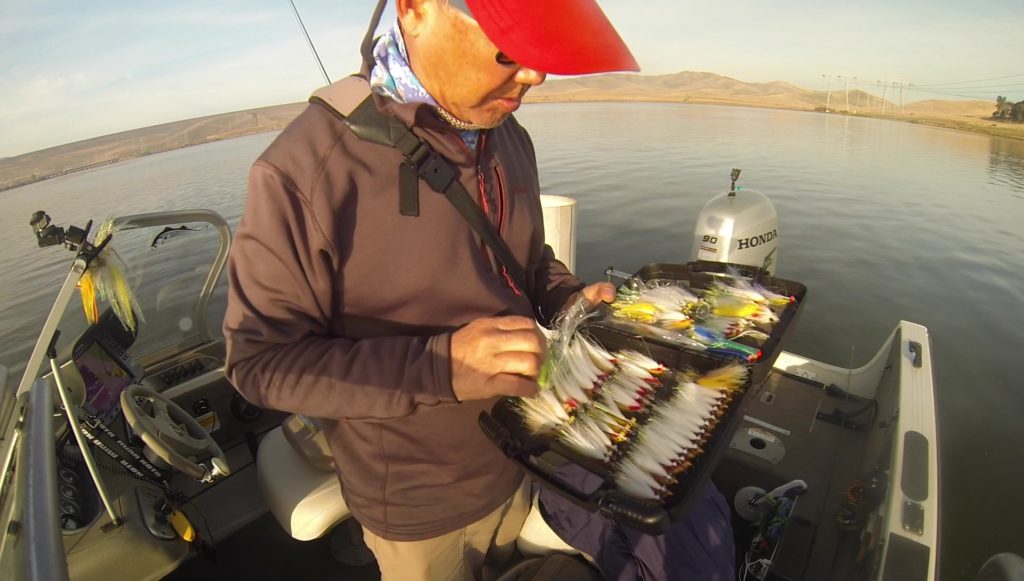 One very important discovery today was while flying the DJI Mavic Drone,  my trolling motor wireless controller does not work due to interference from the drone!   The Mavic has an operating Frequency of 2.4 GHz to 2.483 GHz.  I have yet to find the Minn Kota Remote frequency posted but it definitely stops working when the Mavic is flying.  To hand land the Drone in the boat,  always turn off the downward facing sensors to it does not “fly away from you”  when your  hand approaches  the bottom of the drone.

One thought on “Forebay Frenzy”