It’s been a busy couple weeks since Ive been back from Jurassic Lake Lodge.  Both Mia and Mark came home for the Christmas Break and we had a great busy family Christmas.  The main event of the last two weeks however was my son’s marriage proposal to his girlfriend Phoebe of nearly 8 years.  That is for a different post  however.

Jurassic Steve is a compilation of vids taken of Steve Sakamaki, my 87 year old partner on this trip.    He continues to amaze me by his ability to endure  and  enjoy these demanding trips.   Not only is the fishing demanding,  but the traveling  takes it out of you as well.   On our way back  we ran at least a mile through the many terminals trying to make connections and missed flights.   Steve hooked  and landed many many fish on this trip and definitely was not the low man on the catch list.    He’s nearly 26 years older than me which give me hope that if I stay healthy,  there are many more years ahead  for me trying to  flyfish the bucket list.

The Second film is of Guy Schoenborn. who has been an avid outdoorsman all of his life. He’s fished and hunted throughout the western U.S. and has hosted fishing trips in Africa, Alaska, Argentina, Belize, Bolivia, Brazil, Canada, Christmas Island, Costa Rica, Guatemala, Venezuela… Guy resides in Montana and runs Fishing with Larry Travel Outfitters with the help of his staff — Norma, Toni, Sherri, and Kim. Guy is the President of  “Fishing with Larry”.    Guy’s  father (Larry Shoenborn) use to have a TV show called Fishing the West that ran for 13 years.   I had the pleasure of fishing with Larry on the Skeena nearly 20 years ago.  Larry passed away in 2011.

The last film,  “Memories of Jurassic Lake” is all the other footage I shot that I just didn’t want to throw out.    I should have called it “the kitchen sink”.  Its  probably very boring to the typical viewer but  I made it to help remind me  what to bring the next time I go back and to remember those great smaller fish that are so easy to forget when catching hundreds of fish.  On any other day in California,  those little fish would be very decent memorable fish.

Camera Workflows -I took a lot of thought about what cameras to bring to Jurassic Lake this trip. .  I decided to take 5 small cameras this time to save on weight.  Unlike other trips Ive taken,  I had to try to keep my luggage under 50 lbs total for carry on plus check in luggage.   South American Domestic flights charge extra for total luggage exceeding 23 kg (50 lbs).  My camera bag usually has about 25 lbs in it and on this trip I tried to trim it down.    I decided to use a GoPro 7 as my main still camera on the stream. For longer and closer shots I decided on the Lumix lx100 which has best in class quality for a pocket camera,   I also brought a Sony 4k Mini Camcorder  with a Monopod to do any zooming or high end stabilized video (instead of gimbels) and finally my Mavic Air Drone.  I  was very pleased with the quality of video this combination was able to get. 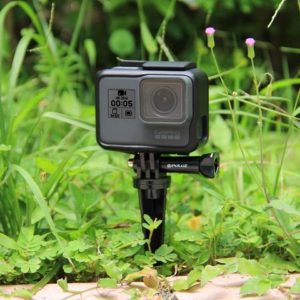 The GoPro7 is the newest in its class as of this post.  It has a faster processor and more ram.   It takes a 12 mp still in HDR mode and well as 4K video in 60 frames a second at a 100mb bit rate.   The Gopro has lens correction presets in Lightroom and is super portable and easy to setup streamside.  I used a waterproof tripod\selfie stick and was even able to shoot it at belt level tucking it into my waders.  Next time I think Ill use a sand spike for even more versatility vs a mini tripod.  One of the best features of the GoPro I discovered on this trip is the ability to do voice commands to take a picture and turn the camera on and off.  This beats the heck out of timer settings and remote iPhone triggering.   After setting up the camera,  all I had to do was wrestle the fish into position and say “GoPro turn on”  and “GoPro take a photo”.   The Gopro would beep and the front light would blink when it recognized my command to take a photo.   There is about a two second delay from the time you say it till the shutter releases.  The guide got a kick out of me yelling at the camera in the wind to take the BLANKING picture  and tried to talk to it in Spanish as well.   Voice command was made for fishermen and  makes it easy to take multiple pictures by command after repositioning the fish for different type of shots. The GoPro7  has also set the bar on digital stabilization.   Its new  “Hypersmooth,” is a dramatic improvement on its earlier digital image stabilization.  It’s so good, you can’t tell the difference between mechanical stabilization  and its new algorithm digital stabilization. 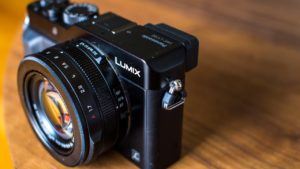 The Lumix lx100 sports a 24-75mm lens and a built in  flash that makes it a bit more versatile than the GoPro however in all honesty,  I think my Iphone XS Max is even better.   I don’t think I will be bringing the Lumix along on the next fishing trip.  I actually learned of a new case for the Iphone that makes it even more waterproof, rugged and takes filters and attachments like underwater domes which allow you to take great over and under water shots.   The Iphone XS has a major role in  fishing cameras with its improved quality, water resistance and versatility that now rivals handheld waterproof cameras like my favorite Olympus TG-5. 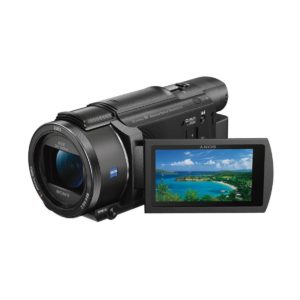 The Sony FDR-AX53 Super Stabilized 4K Video Camera was made to shoot flyfishing.   Not only does it have a great  smooth 20x zoom, it has mechanical gimbal stabilization built into the camera.  It also takes 4k video at a higher bitrate (hence quality) than a GoPro at 4k.  For shooting other people, its the best 4k camcorder you can get that is small and versatile.. The FDR AX53  shoots 16 MP stills and also has the ability to do timelapse and iphone control.  I miss the old days when we shot Video with Camcorders and you can follow moving action so much better with one vs a Panasonic GH5 hybrid camera. 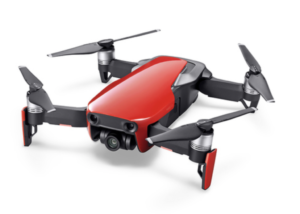 Finaly,  the Mavic Air Drone took the really epic shots again this trip.   Despite the hundreds of hours I have of  filmed on drones,  I learn something new every trip.   Using a polorizing filter is key  but positioning the drone between the sun and the fish is even more critical.   Jurassic lake is known for its big winds and I tried to get out at every lull.   I managed some decent footage in 30mph winds but had to position the drone to shoot downwind to take advantage of the mechanical gimbles superior horizontal stabilization .   One morning while I was trying to get the final moments of Steve landing a fish,   I took the battery down to 10 percent .   I thought I was pretty safe since the drone was about 20 feet away from me at a 45 degree angle above some shallow water where Steve was landing the fish.    Finally I decided to land with 5 percent battery left and as I gunned it in sports mode to land (or crash)  where I sat,  the battery died in mid air and the drone dropped into 7 inches of water like a stone.   I jumped up in horror and raced over to the drone and plucked it out of the water.  I guessed it was underwater for about 4 seconds.   I  immediately took the battery and SD card out of the drone and shook out the water from the drone.  I was pretty certain that I had ruined it.    That evening,  I was convinced it was totally dry and I powered up.  To my surprise the drone was 100 percent.  I guessed that maybe an air bubble inside the chassis kept the water out long enough to spare the electronics.   I got lucky.