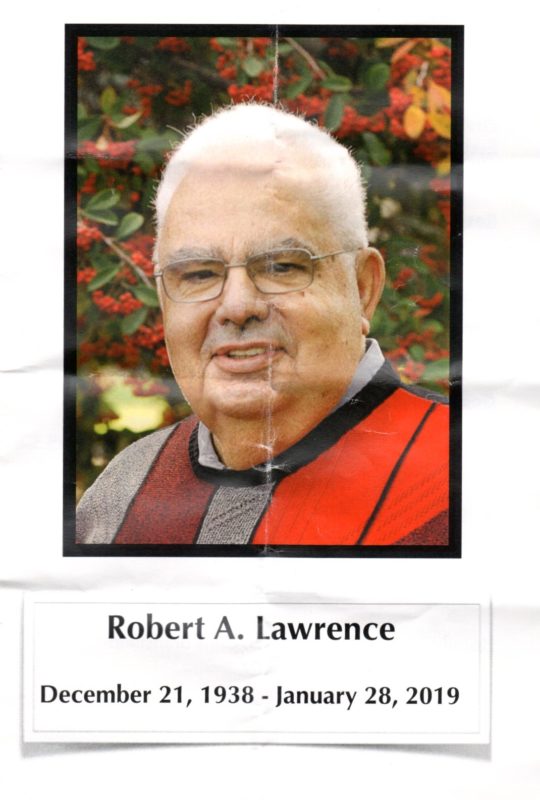 I just got back from the funeral of our accountant and friend Bob Lawrence. Last week we received a thin letter with the sad news and Gina and I took his passing very hard. Bob was our accountant from the very start of my career 36 years ago. His memorial today was attended by nearly 500 people whom I have never met. Today I learned more about him than I had known of him over the last four decades. He died near his 80th birthday like my dad did, and he had 12 grandchildren.

As I sat listening to his son and oldest grandson describe the life he had led, I realized that I looked to Bob as more than an accountant. He was a major life mentor for us. Bob always made us feel like family. He was there for my first year of practice, the birth of our kids, the college and graduate school planning, our three houses, two practice constructions, two audits and he was there these last years as we approached our retirement strategy.  He has been a mentor for every major event in our lives. During the service I calculated how much time I spent talking with him over our lives.  After 36 tax returns, and two successfully defended audits, I realized that I had spent about 47 hours with him over the last 36 years which included my anxious phone conversations about new tax laws, investments and new practice construction. Bob became one of our most trusted advisers in less than two days of conversation.

His sense of humor and his genuine warmth and concern will be greatly missed.  He had  impressive skills on a manual calculator and he was the image of a wise CPA (thick glasses, fast math skills, never looked at the calculator as he crunched  numbers) .  He had a way of condensing complex issues and he always had a way of making us feel confident and less anxious.   He understood the dental field having many dentists as clients.  Best of all, I always felt like he had our backs and that he was on our side. He was so easy to talk with and led a very colorful life.   One year he joked about how some people dred going to the accountant as much as they dred going to the dentist.   But, I always looked forward to my yearly hour talks with Bob. I would go in with a list of perplexing questions (not all accounting) and Bob would answer every one of them. He was a database of information – more versatile than the internet.  And every time I left his presence,  I was happy, less anxious and wiser. Bob was all about family and I always felt that the advice he gave me was exactly what he would have given to his own family.   Over the years,  Gina and I thought he would always be around but I knew he was getting up there in years the last we talked.  We both agreed that we would keep working at least part time for as long as we could, to see the people in our lives that give it purpose and meaning. We would concentrate on our existing patients (clients) that we had history with.    That was Bob’s last pearl of wisdom to us.  I hope I can live like he lived,  by working at least part time till I’m 80 as long as I enjoy the people I work with and enjoy the company of my patients who have become our friends.  Thank you Bob.

Bob taught me how much you can know and value someone in as little as 47 hours. It is not the amount of time but the quality of time – even when its just doing the job you trained for.