Saturday May 18, 2019– I snuck out to the lake this Saturday morning to get a couple hours of fishing in despite the small window of opportunity forecasted by the weather gurus. I launched at the Dinosaur Point ramp at 7:30 in ZERO wind with only one other boat on the water. The forcast was rain and wind starting at noon. The lake dropped another 10 feet this week. Its seems to be dropping very rapidly. My depth offset on my fish Finder was set a 120 feet. I started fishing the west side dams. The coves were very narrow and deep with the water drop. In the past, I have been able to slowly run down the middle with the sonar looking for schools and often times I would herd the fish to the end of the cove where I would anchor far away from the end and start fishing for them as the turned around or milled around.   It is a good way to trap some fish when its hard to find schools that aren’t moving quickly. I caught one  right away at the end on the first cast to 10 feet of water and had several fish follow but not hit. The water was colder today at 58 degrees and there was a full moon last night. I think the fish were hitting pretty short and preferred a slower fly today but I didn’t catch enough to be certain. Lots of follows today. I did notice that of the three Stripers that I caught they hit a pulse disc over a plain clouser. I sometime cast two rods if I need to let them sink a long time. On the way out from the earthen dam, I threw a Zara Spook way into the shallow water and caught a 20 inch striper on top. Pretty cool considering there was no surface activity anywhere today.

Next stop was the Cottonwood wall. As I pulled up, I could see last weeks huge shad schools swimming up and down the rock wall. The water level is right at the bottom of the wall now. I fished for stripers for one pass on the wall at 30 feet depth and didn’t get even a bite. The sonar was lit up with shad. Lots of shad. So, I switched over to a floating line and started casting flies right to the shoreline where the schools were thickest. I managed to hook 6 of them but only fair hooked two. I forgot how hard they fight. Sorry Stripers, I think the shad are stronger per inch. The shad aren’t really hungry yet. Any day now they should really be hitting flies.

At 11:00 there was still no wind at Cottonwood so I decided to try Romero and the trash racks before the wind and rain started.  The island at Romero is completely out of the water and there are also schools of Shad swimming along the shore and dam. I looked for stripers along the dam and on the the bottom at 30 feet with no luck at all. Finally. I went over to the trash racks. The Sonar showed lots of small schools from 20 to 15 feet down circling the racks. My first 4 cast resulted in a pair of fish as the wind started to pick up and white caps could be seen across the lake. I made a couple more cast and got hits on each but decided to put my lifevest on and start heading back along the shoreline.  It went to dead calm to small whitecaps in two casts.   I stopped and fished the east shoreline for half an hour without a hit and headed in at 12:30. It was a short day but I think if I stuck it out at the trash racks, I would have caught at least a dozen fish.   I think I will be out again on Monday with Vaughn .  Right to the trash racks on Monday. 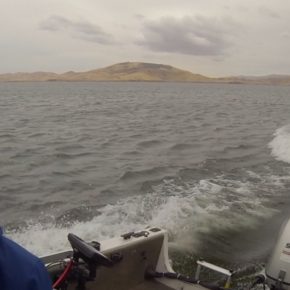 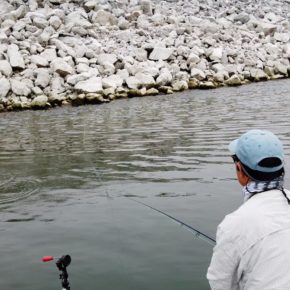 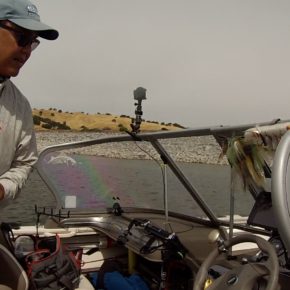 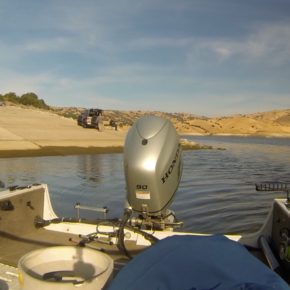 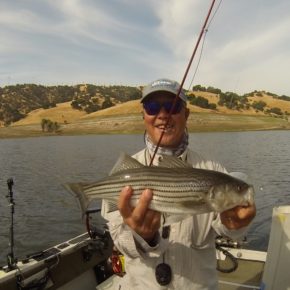 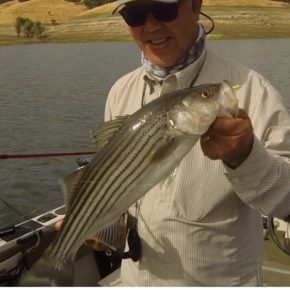 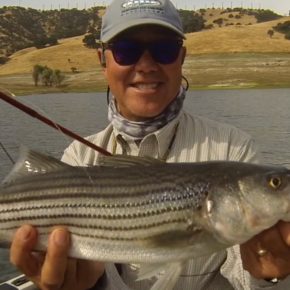 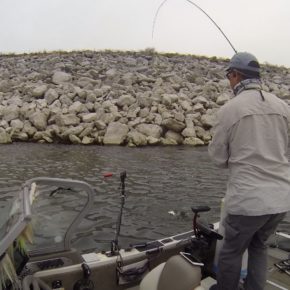