The fishing gods found it appropriate to hand me a zero today–a long day with no hits or fish.  The weather was perfect considering it had been blowing over 15 mph for the last three days.   Gina gifted  me a  10 inch Garmin GPSmap XSV Chartplotter and Sonar which I built into my portable unit with the Panoptix Livescan.  I was excited to try it out on the lake.    I mounted the old Garmin Echomap on the Alumaweld Dash.   The main reason for the upgrade was to be able to use Active Captain to  screen capture the Panoptix Livescan.  The Bay of Pigs to Romero along the Dam was good in November so I headed over to see if the schools of fish were still hovering around the dam.   I fished slow and on the bottom-  I had some good fish two years ago in January that way but the fish wouldn’t cooperate at all.  However,   I was really impressed with the new sonar.   The images are sharper and faster than on the EchoMap,  Also the Panoptix Livescope seem to be crisper.   The Video Capture using Active Captain on my Iphone worked flawlessly.    I  didn’t expect much in terms of action today because most reports were pretty slow.    I took some huge swimbaits out to try and broke in a couple big new rods- Dobyns DC 908 Utlra Mag SB and a Dobyns  DC 806HSB-LH.  I also received an Okuma Komodo SS Baitcaster along with one of the best baitcasting reels under 50.  What a contrast to throw a nine ounce lure and then cast a 8 wgt fly rod.    Glide Bait Fishermen having been doing well catching many  fish in the 20-40 lb range in the Sac River near Chico. They are feeding on Salmon smolt. The action on those 9 inch glide baits is amazing.   I could never get a fly to do that.   Unfortunately, not a single large  striper seemed interested in feeding or following.    If I didnt have the Livescan,  I would not have believed there were so many fish under the boat.   I scoped them all over the lake  and threw the kitchen sink at them with not luck.  I can’t wait for those fish to start feeding and reacting to the flies and lures.   I think Ill be able to find them consistently this season.

I ran into Don Chesarek today at Basalt Launch.   He was the only fisherman I saw at the lake today and he had been out already three times this year.   Unfortunately, the lake has been very slow this week.   Steph only got one all day last Thursday and the empty parking lot seemed to indicate everybody had better things to do this cold winter morning.    I didnt fish a single day in December mainly because of the rain and cold.  Instead I used the time to restore and improve a new boat I purchased. so that I could fish the Delta or Chesboro Reservoir without losing my inspection tag for San Luis Reservoir.

It was a pleasant surprise to meet and talk with Don Chesarek today at the ramp.  I had been thinking about mounting a trolling motor on my pontoon boat in preparation for fishing  Henderson Springs in a couple months.   Don is one of the old timers  at San Luis.  He is a member of the San Jose Flycasters and fished the lake with Lee Haskins over the years.   He also was a friend of Jim Cramer.  Having moved to the bay area in the 60’s, he worked for IBM and knew my dad at the old Cottle plant.  He gave me a tour of his souped up frameless Dave Scadden Pontoon Boat.   Don’s modifications are  awesome and well thought out.    He built a PVC framework  into the float tube complete with an electrical system, fish finder  and mechanical  motor steering mechanism.  Don is in his early 80s, retired and fishes hard–truely an inspiration to staying healthy and flyfishing for a couple more decades.

Warm up is over,   its time to catch some fish this decade….. 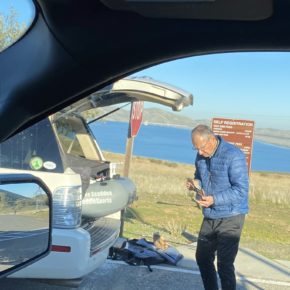 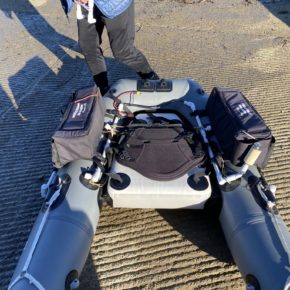 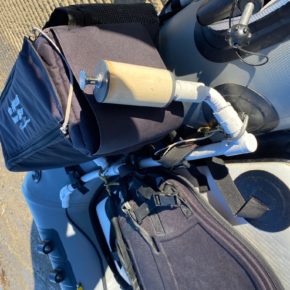 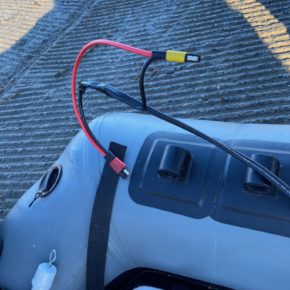 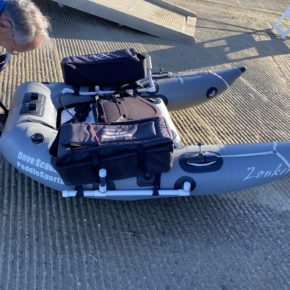 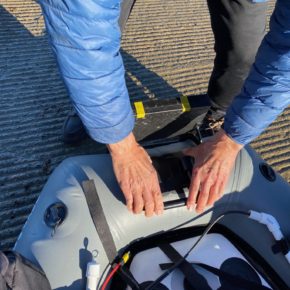 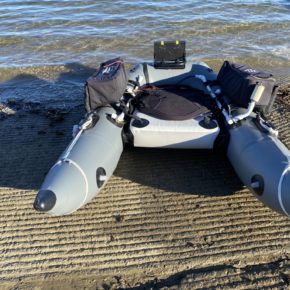 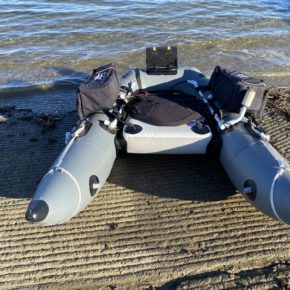 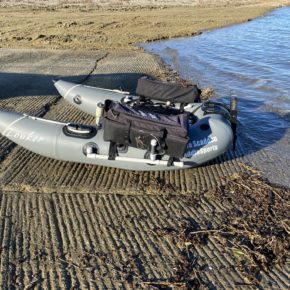 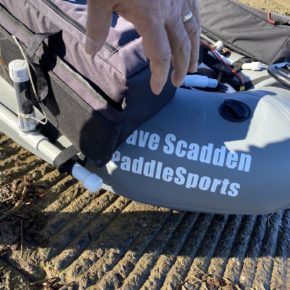 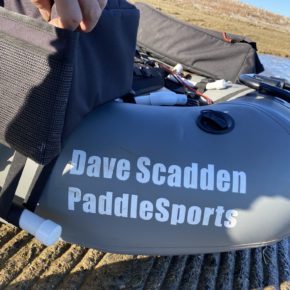 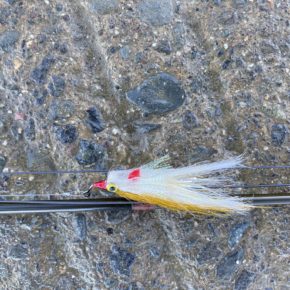 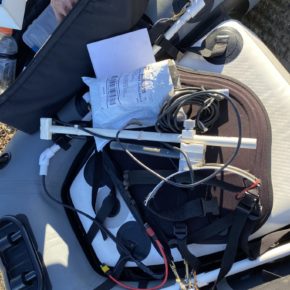 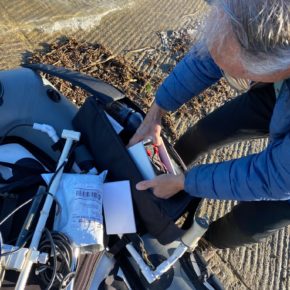 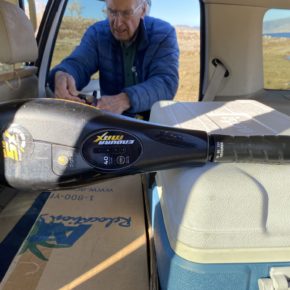 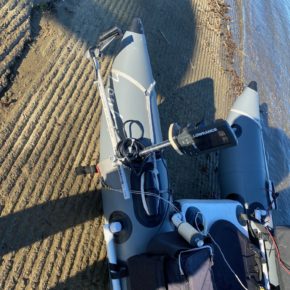 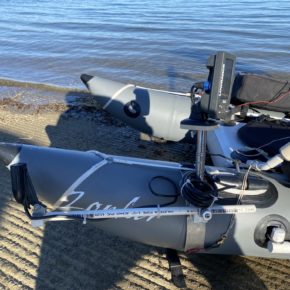 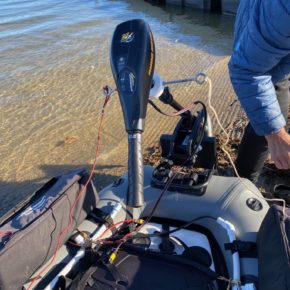 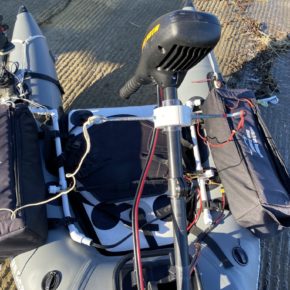 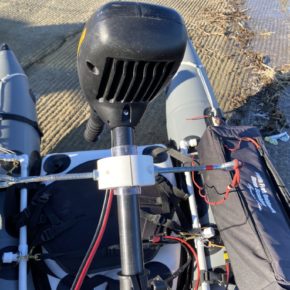 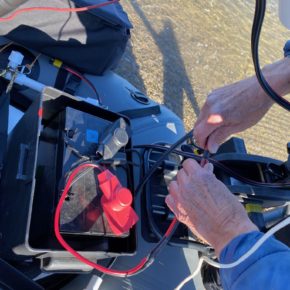 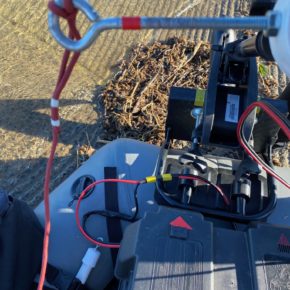 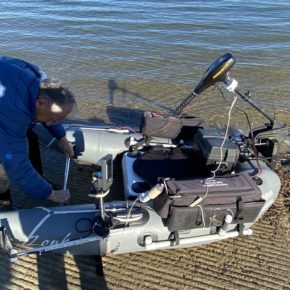 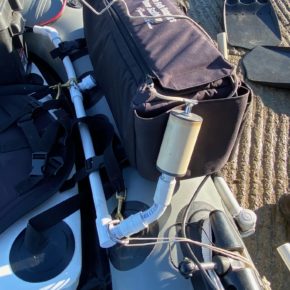 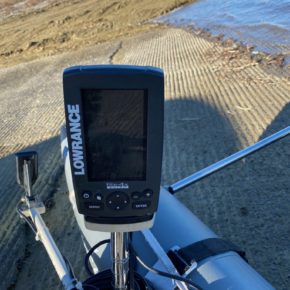