I was beginning to think I was jinkxed with the weather at O’neill Forebay.   For the last two weeks  I’ve been trying to get out every day  that I have been off work.    Unfortunately,  I’m about 50 percent  these last two weeks when it comes to actually making the ride due to inaccurate wind predictions.   It also makes it hard to invite anyone to fish since there is so much cancelling and real time changes in plans.  This last work week saw some pretty perfect days however.    Unfortunately,  I was working while others were feasting on the forebay in calm wind conditions.   Two days ago, five fly fishermen caught over 150 fish between them on the forebay in calm conditions all day long.    I don’t remember ever seeing a calm day like the one they fished this year.    When the wind gets calm at the forebay,  fishing can get spectacular.   In August,  still water means topwater.   The Delta Smelt are about 2 inches right now and the abundant  weeds in the forebay are stoking  the bait population.   When the bait is healthy, the fish get fat and strong.  It is during this time of year that the stripers actively feed on abundant minnows and smash fast stripped flies.

The first thing I do on a day I hope to fish is start calling the wind line at 6:00 in the morning when the Kiosks open.   This last month,  the only calm wind windows have been from 11:00am to 2:00PM.    When she tells me the wind is starting  to die down to around 13 mph,  I head to the forebay and hope for a big window.  This morning it was blowing 20 mph at 6:00am.    By 8:00 it had dropped to 15mph and I decided to chance it and go.  As I crested the pass,  I noticed whitecaps on the lake .  When I got to the Forebay Kiosk,  the flags were straight out but the winds were not coming directly from North NE.  They were actually blowing more east.  That slight change of direction will put the a wind shadow on most of the forebay.   This phenomena is not reflected in the wind prediction apps I use because I think the geography affects the local wind direction.   I arrived to a calm forebay even though the lake had white caps.

I started fishing the rock wall across from Mederous.   Bob M was fishing the wall without a trolling motor.   I cant imaging fly fishing without a trolling motor.  He was fishing the very end of the wall at the buoy line and picked up a couple.    I stopped further south and immediately got into some big schools of fish.  I worked the wall south catching fish on every other cast until I didnt see fish on the Panoptix.   Most of the fish were down at the north end with Bob.   With Bob  trolling motor out,  I suggested he drift the weedline in the channel where everyone did so well a couple days ago.    He took off for the channel and I just couldn’t leave the Mederous Rock wall action.    After 25 fish, I decided to go check out Bob in the channel.    I started toward the chanell and noticed Bob coming back to the wall.   We stopped in the trench and he told me he picked up more than a dozen along the weed line between the bridge and islands.    The weeds this week are very dense and there is a steep dropoff on the edge of the weeds.    When i pulled up along the wees in the channel, the winds were starting to build.  It was blowing 15 mph in the channel and I had a hard time moving along the weedine and fishing to it . I think the east side of the channel fishes better and with the winds blowing NE,  casting right handed is risky business.   I decided to spot lock out from the edge and fish directly downwind parallel to the edge.    That was the ticket today.    If the bite slowed down,   I would just turn the anchor off and drift down 20 feet and anchor again.  I did better letting the fly sink to near the bottom – a ten count .    Despite the wind,  I managed to catch  near 54 fish from 9:00 to 2:30.

Around 2:30  I decided to fish a big hole in the weeds.     Sometimes bait hides in the big pond size holes right in the middle of the muck.   There are all sorts of good fish that hang in those holes trapped in there by the thick weeds.   Later in the month,  you can catch them on topwater flies .    I pulled my trolling motor shaft up near the surface and plowed through the weeds to park on the edge of the hole.   There were no eating fish in the hole today  and when I powered out of the weeds with my Ulterra ,  I managed to wrap my trolling motor prop in the weeds and it stalled out.   I cut myself out of the weeds with my outboard and when I tried to stow my Ulterra,  it stopped after pulling all the way up as it began to tip back.     I thought it was just a reset issue but I couldn’t get the motor to reset by turning the motor off and then on and hitting the power button three times quickly.   I could have caught fish till 8:00 if the spot lock was working  but I was out of luck and couldn’t fix the motor on the water today.     I manually stowed it and went home.    My gut feeling is that the batteries are run down from holding in the wind today.  Hopefully ,  freshly charged batteries my help fix this issue.   Ulterras are very sensitive to low voltage.

The Delta Smelt that I cleaned out of one of the stripers were only  1 to 2 inches which is why  smaller flies seem to work better.   The water is surprisingly clear as well.  The “flavor of the month”  flies  that I  post worked well in the smaller sizes, as did smaller Lee Haskin Delta smelts that I tied weighted on size 4 hooks. 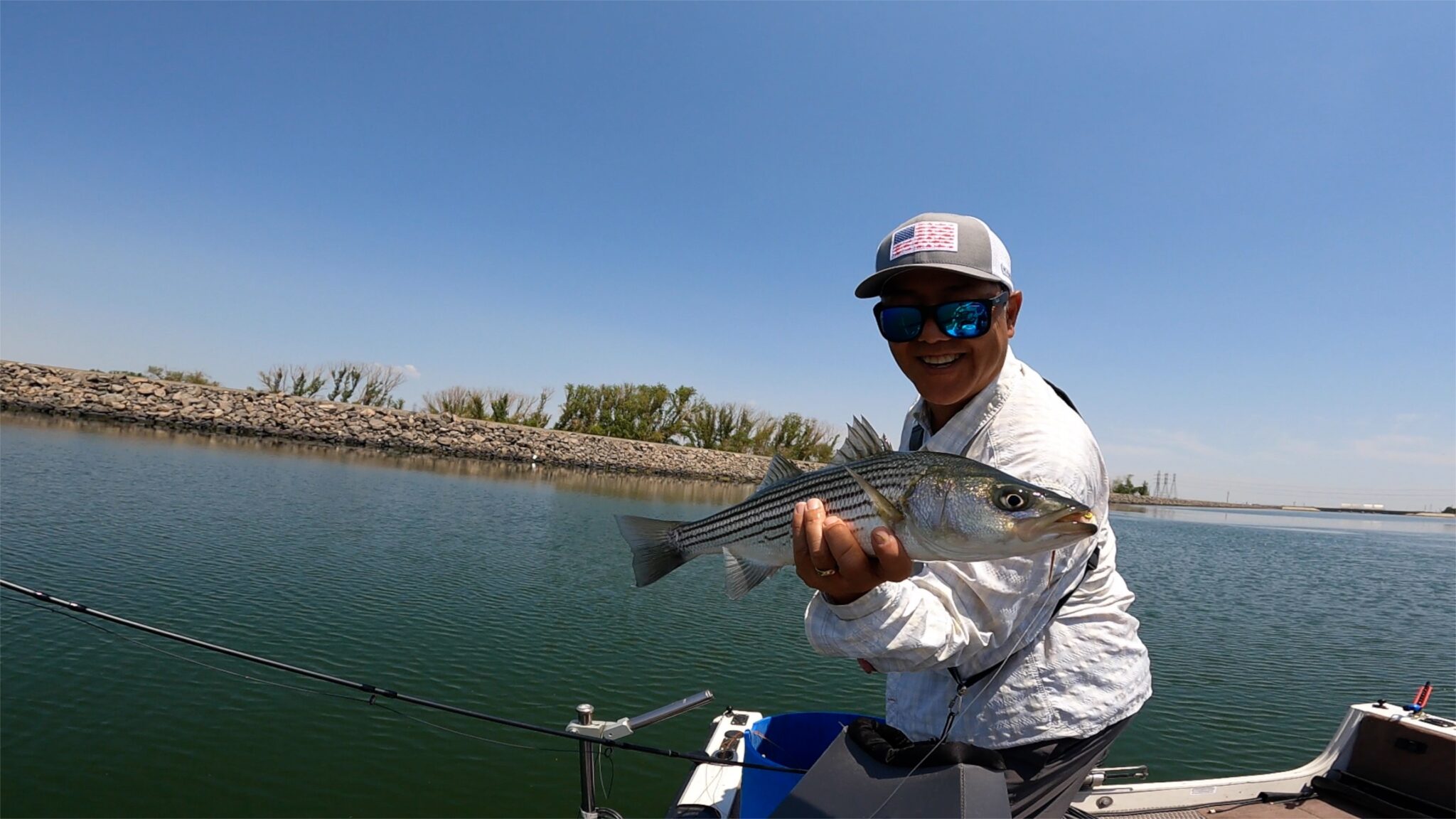 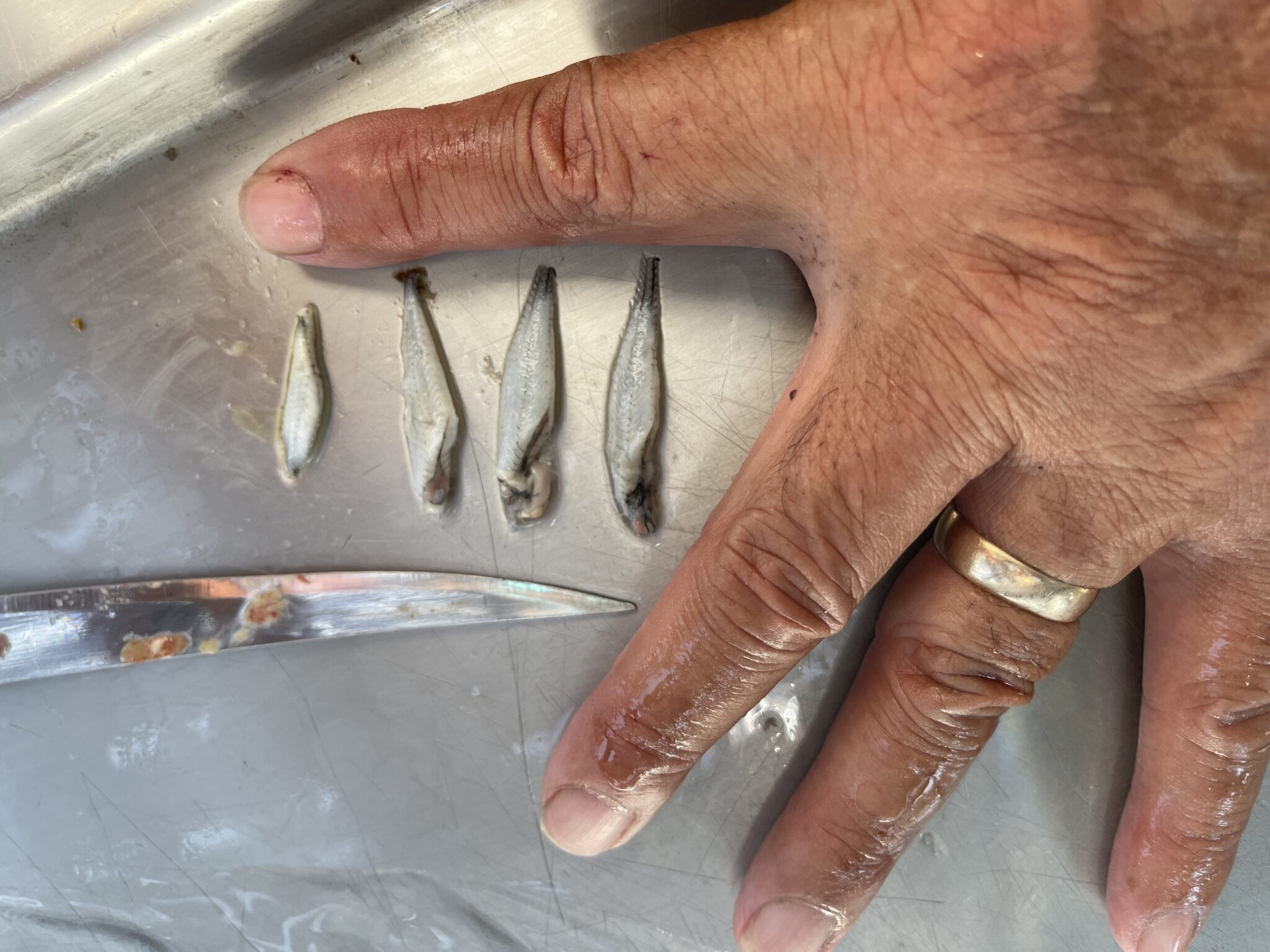 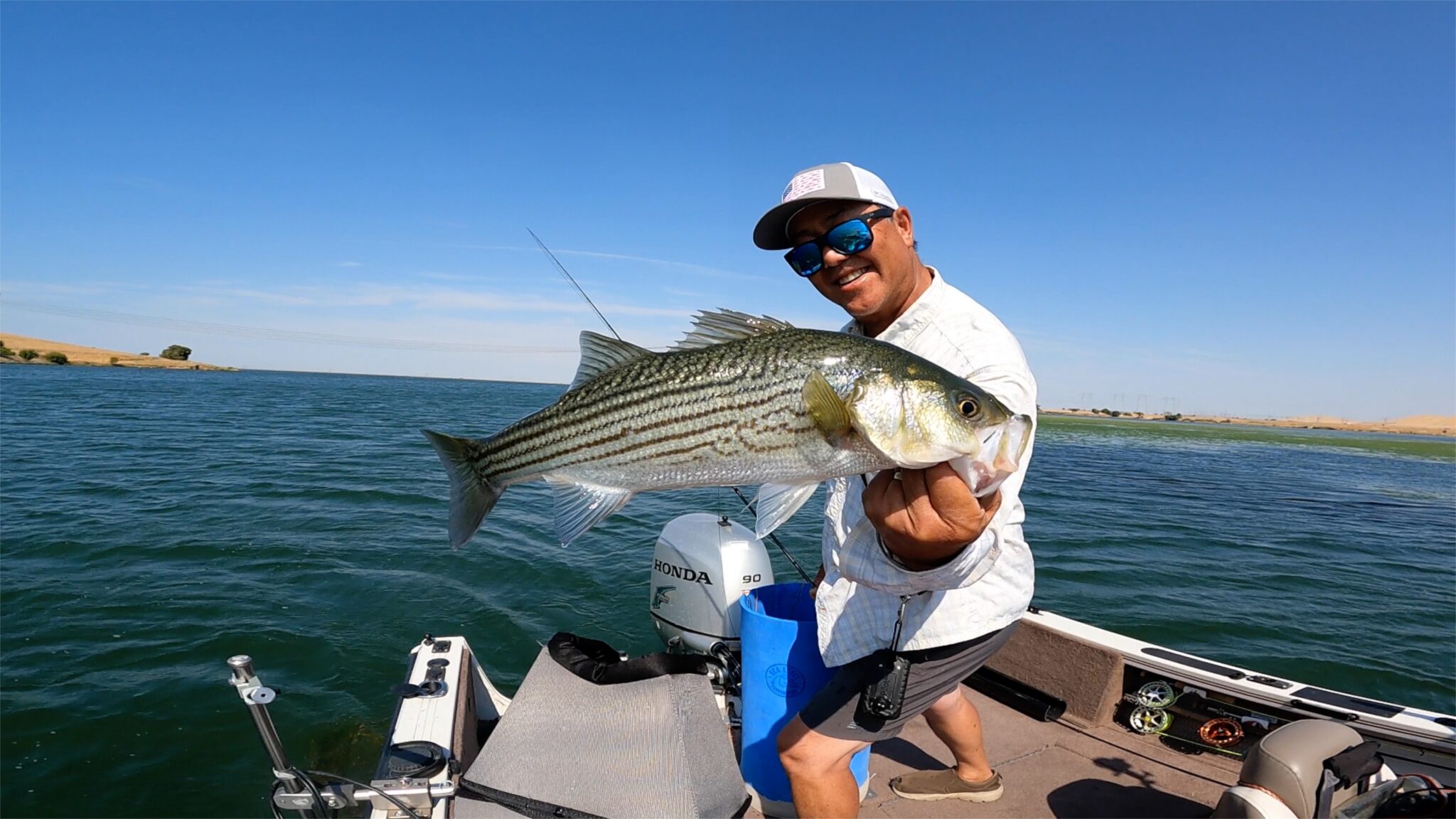 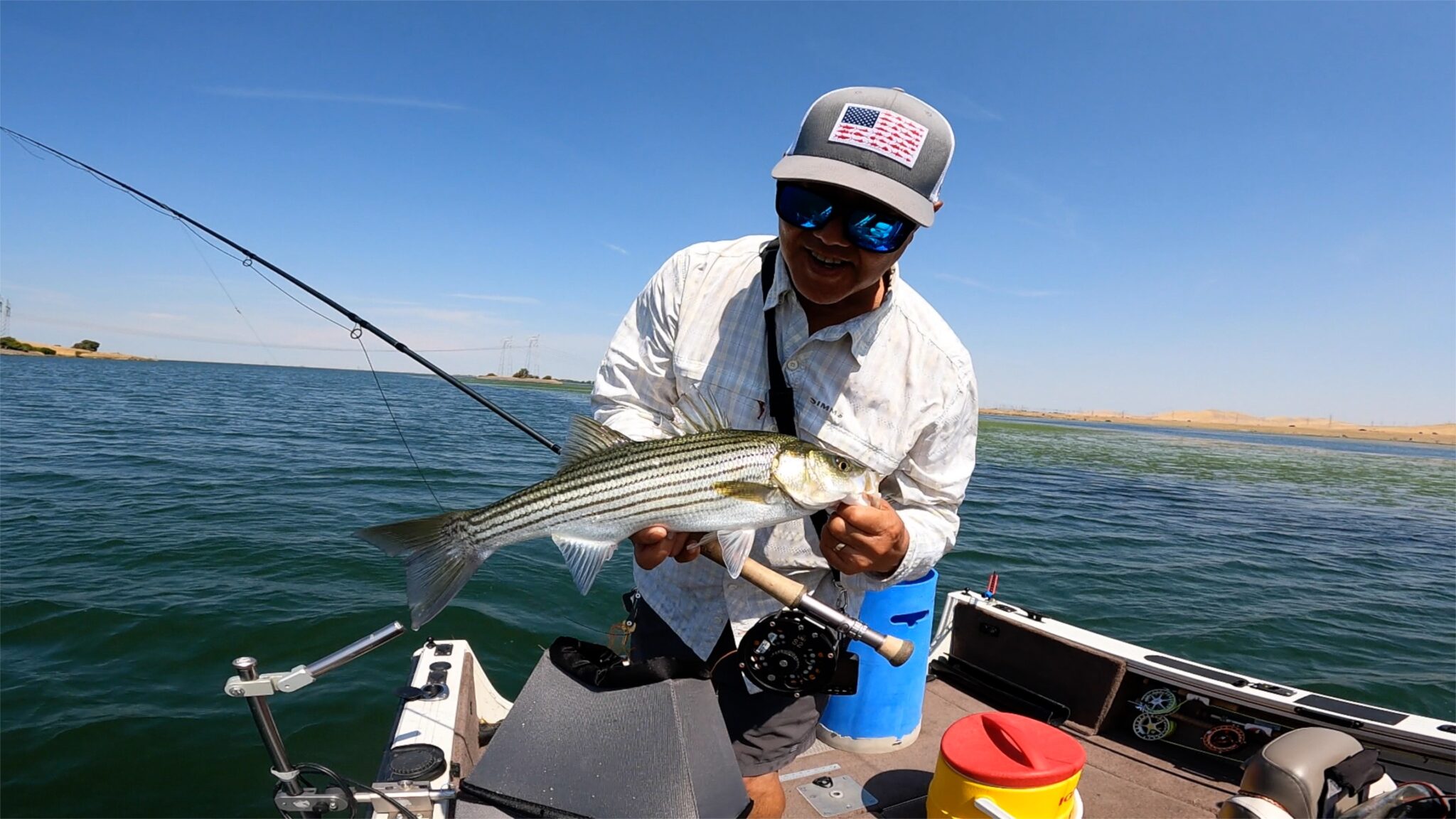 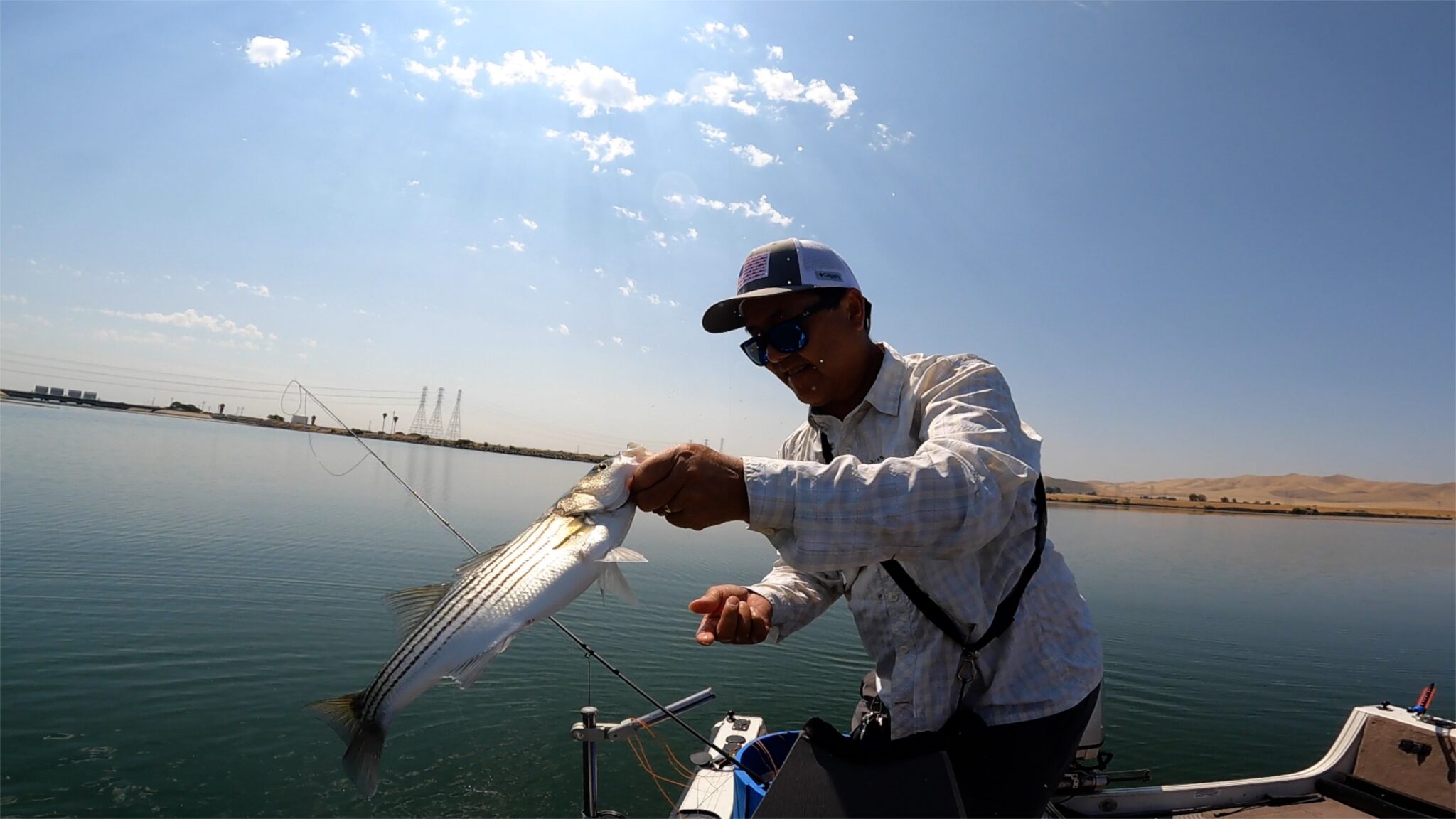