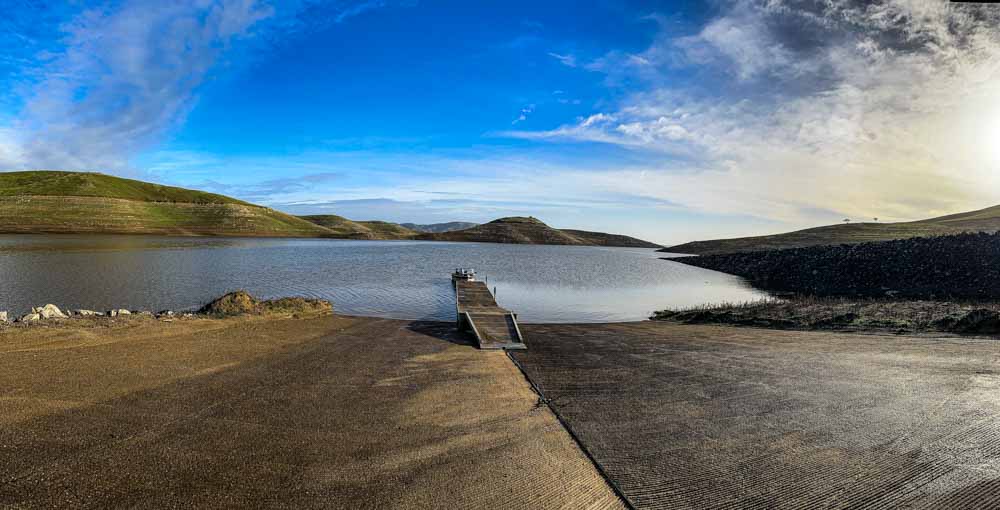 One of the nice things about keeping a fishing diary is the ability to go back in time and look at years past at nearly the same day of the year.   After having one of the best days I have ever had on the Forebay only a couple weeks ago,   I thought that maybe I just didn’t know how to fish late December and early January which has been incredibly difficult for flyfishermen  over the years on the lake and Forebay.    I call it the winter cycle when the water temps reach mid to high 40s,  when the main rains come and the water visibility gets less than 2 feet in the forebay.   Over the last years that I have owned a Panoptix Livescope.    Ive been able to watch the fish as they slide into the  winter cycle.    There are lots of fish in the lake and forebay,  but not in the shallow water and eating.   This last weekend,  the first fishing weekend of the year.   I headed out to the lake and forebay with the goal of catching only one fish to start the New Year.   Also,  I had a reservation at our favorite oceanside campsite at Half Moon Bay for a one night stay.  I made that reservation a month ago not knowing it would be in the fiercest weather ever to test the Revel 4×4 fishing Van Conversion.   I originally was going to fish,  but when we got out there ,  not even the best surfers had balls enough to test themselves against the 30 plus foot waves, in the lull before another huge storm  that hit Half Moon Bay campground that night.

Friday started off in San Luis reservoir.   Like me , I saw half a dozen boats with the same idea that the clearest water in Northern California was probably going to be in the middle of San Luis reservoir.   Despite rumors that they would not fill the lake until after the retrofit in 7 years,  the Lake has been filling fast. The lake has risen 33 percent since Dec 10 and the water is nearly up to the Cottonwood Rock Wall.   If the State is serious about the drought,  they better have those pumps on full blast while the gettin’ is good.  What a waste of water if you can’t get the seven largest reservoirs full by March when almost all of Northern California  is Flooding.    I just can’t stand California Water mis management. 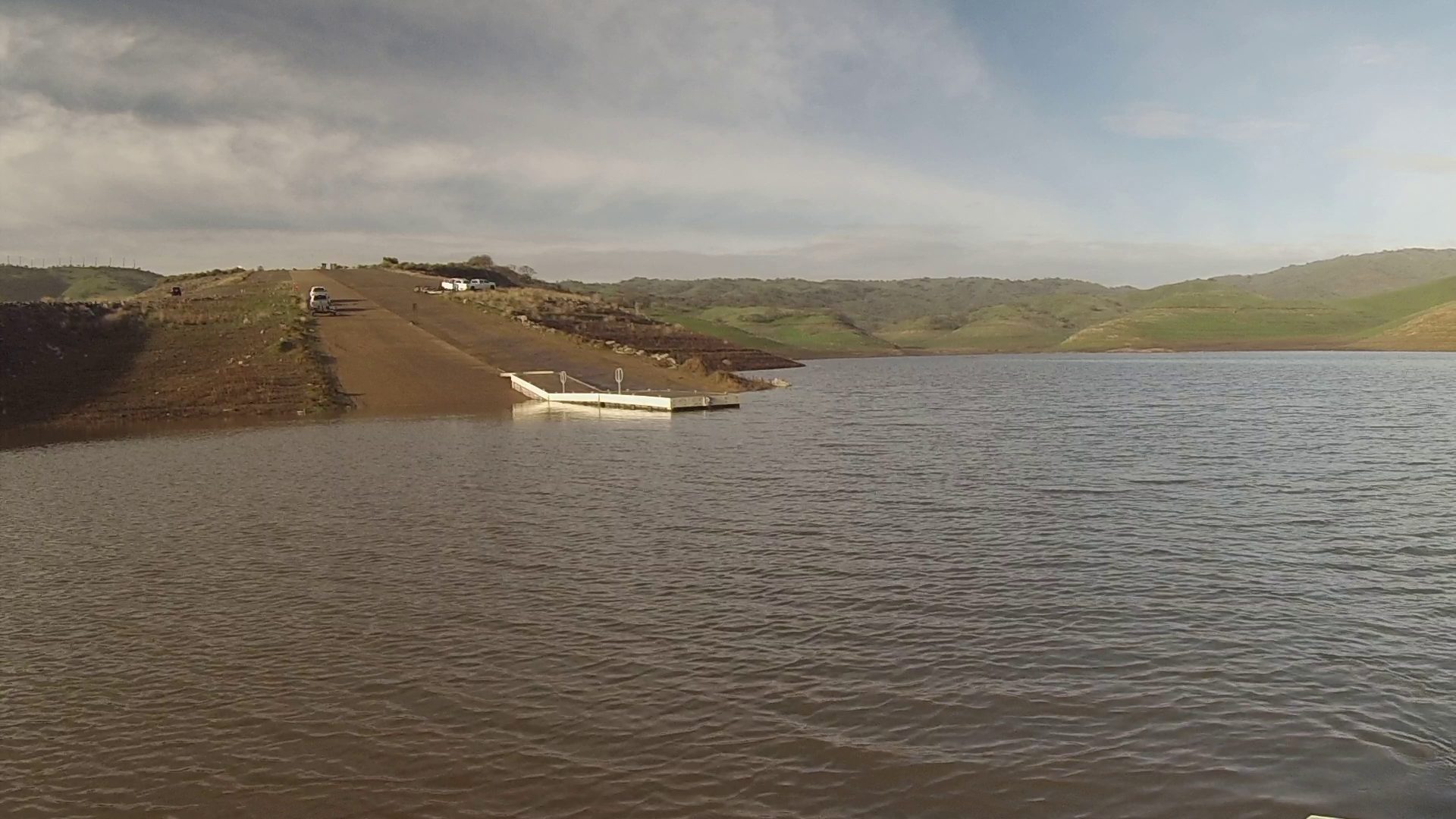 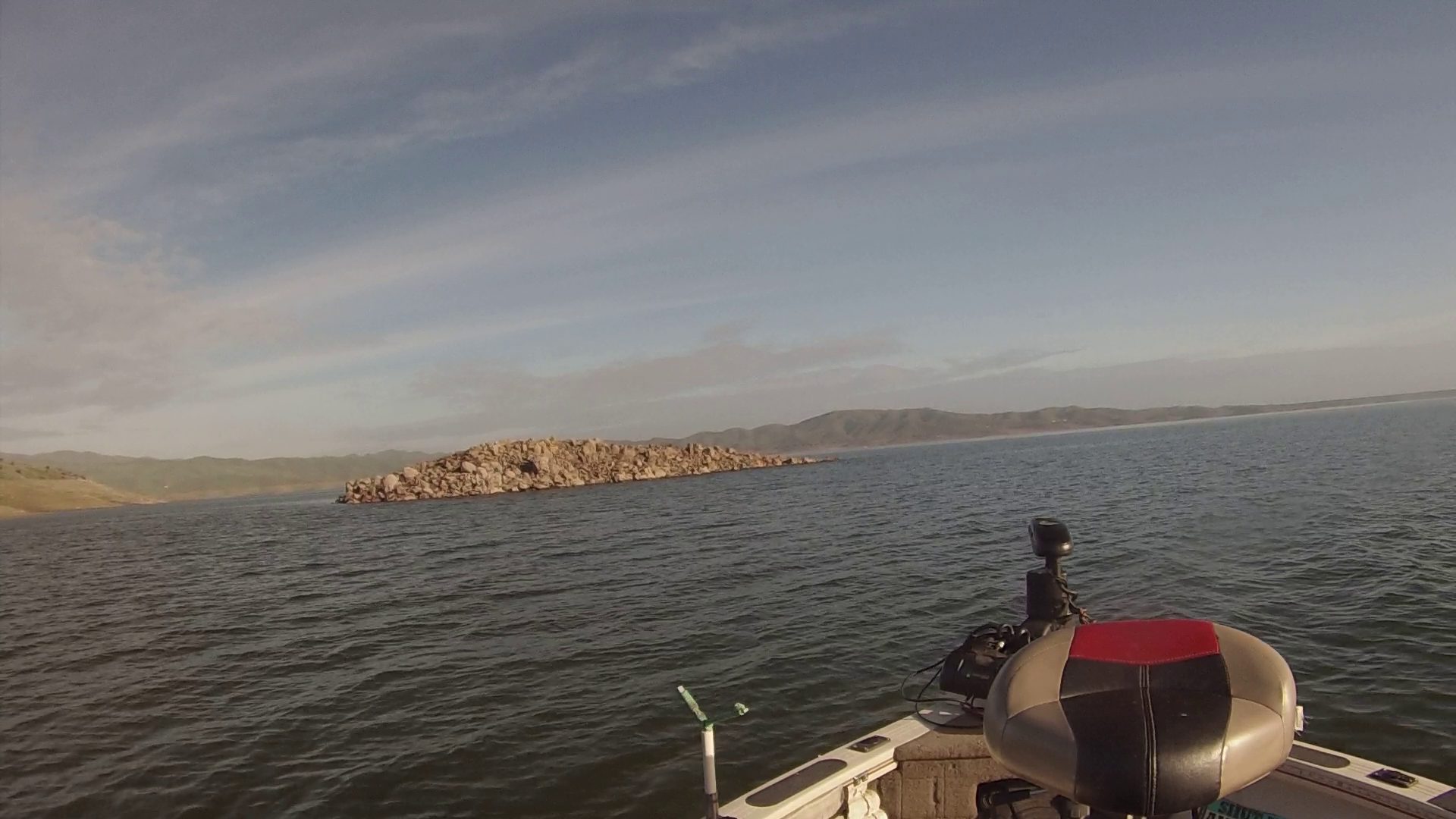 I spent the day hunting for fish in all the familiar places – Rock Pile, Three trees, Parking Lot, Bay of Pigs, Guardrail, Trash Racks, and Dam Face around Romero.     I was the only one on the lake fishing the shallows under 40 feet.   I did my best to find them but even with two sonars smokin’ all day,  I couldn’t find a school of fish.   I saw fish around the Dam at 80-100 feet and word is that Meng Xong – a very accomplished troller and inventor of the Atlas Rig- caught ten fish including several teeners.    I tried out my 6 colors of leadcore fishing the deep in front of the racks with no interest from a fish for about an hour.  I was only fishing about 30-40 feet down and was probably way too shallow to get to the fish that were on the bottom of the lake.   By noon I decided to just check out the forebay. 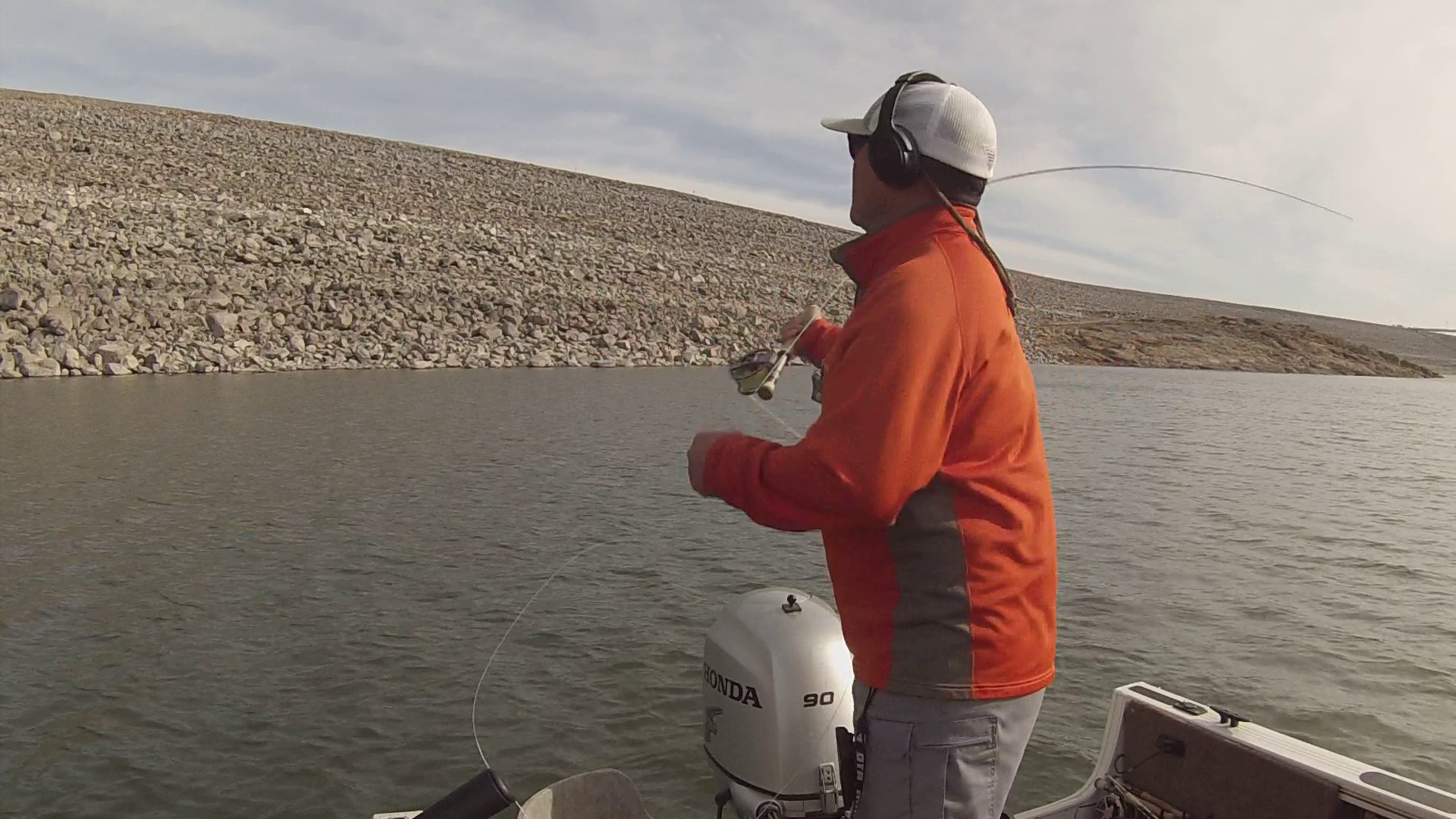 As I suspected,  the visibility on the forebay was about 2 feet and the water was as high as Ive seen it.    I used my sonars to locate fish but also was unable to find any schools of fish with over a dozen fish in them like I was able to last week.     I decided to dredge the area for my lost fly rod for awhile  and also came up with nothing.   I managed to snag the same sandbag three times so Im pretty sure its gone or has drifted down current.   If anyone finds a one piece Orvis Fly Rod in the forebay,   I  would pay a reward to get it back – lost around the campgrounds at Oneill Forebay. 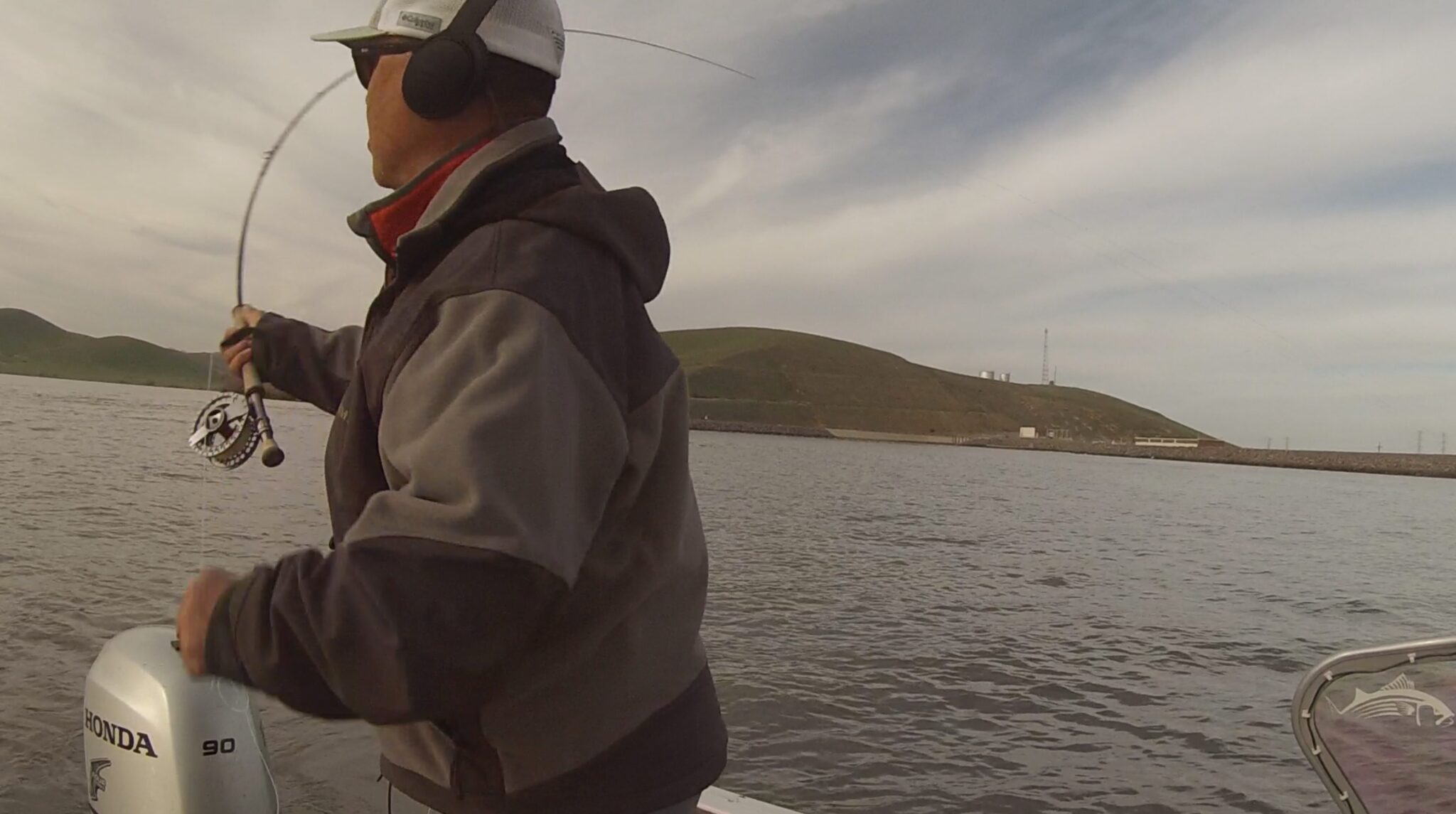 I had reason to be pessimistic today and perhaps I psyched myself out.  There was a full moon the night before,  A Bomb Cyclone was coming dropping the Barometric Pressure big time,   the floods were muddying up the forebay by the minute and the water and air temps were cold.   On top of that,  the wind was unpredictable from white caps to calm.   It just wasn’t meant to be today.

EXTREME CAMPING with the REVEL

The last week of December,   Mark and Pheobe took a road trip to Santa Barbara with dogs in the Synebago. (Mercedes Sprinter tricked out for fishing and camping). The weather conditions were pretty bad along the coast but they had fun just parking, camping,  and eating at bars and restaurants  with no plan for 4 days.   The young embrace the Van lifestyle unlike Gina who needs  comfort and pampering when we camp.    I really wanted to test the Revel in extreme conditions and also I wanted to test out my 12 volt Starlink Conversion.   We headed over to Half Moon Bay Campground on the beach after calling to see if they were still open.   Campsites in Capitola and Seacliff were closed due to dangerous surf and extreme weather but the Half Moon Bay people said they were high enough on the bluffs and far enough from the water that they were still open although they didn’t recommend coming or walking anywhere near the beach.    That was enough for us and we went down early Sunday after celebrating the Orthodox Christmas Saturday night in our warm home.   When we arrived at the campgrounds,  we were one of only three campers in the entire place.   Two of the other campers were extreme surfers and the other camper in the site next to us was just stupid.  They had a huge trailer with two tents pitched next to it.   I hooked the Revel to the electricity service and we streamed the 49r football game through the Starlink which worked flawlessly.   The ability to stream football from anywhere I fish is a game changer for sure.   I had a short zoom meeting in the afternoon  and then cooked and served up a gourmet meal for Gina.   We finished the evening off with a campfire, hot chocolate and ice cream before the big rain started at around 8:30 pm.   We retired to the warm Van and watched TV show till we fell asleep.   Around 2:00 am  the Van started shaking as 45 mph wind gust and pelting rain hit the van.  I felt like I was in a boat in pitching seas.  I was just waiting for a wheel to lift off the pavement but it never happened.   Our favorite campsite (17)  has a great tree that you can park around that shielded  us from the main gusts.    I peaked out the camper at around 3:00 am to watch the campers on the site next to us bail  as the tents started to blow away.  In the morning,  they had left a bunch of stuff behind in there late night rush to abandon ship.   In the morning, it was just two campers left.   I opened the van door to find that we were now parked in the middle of 3 inches of water all around the van.    A ranger came by to check on us to see if we made it through the night.   No casualties and it was fun, exciting and most of all comfortable. 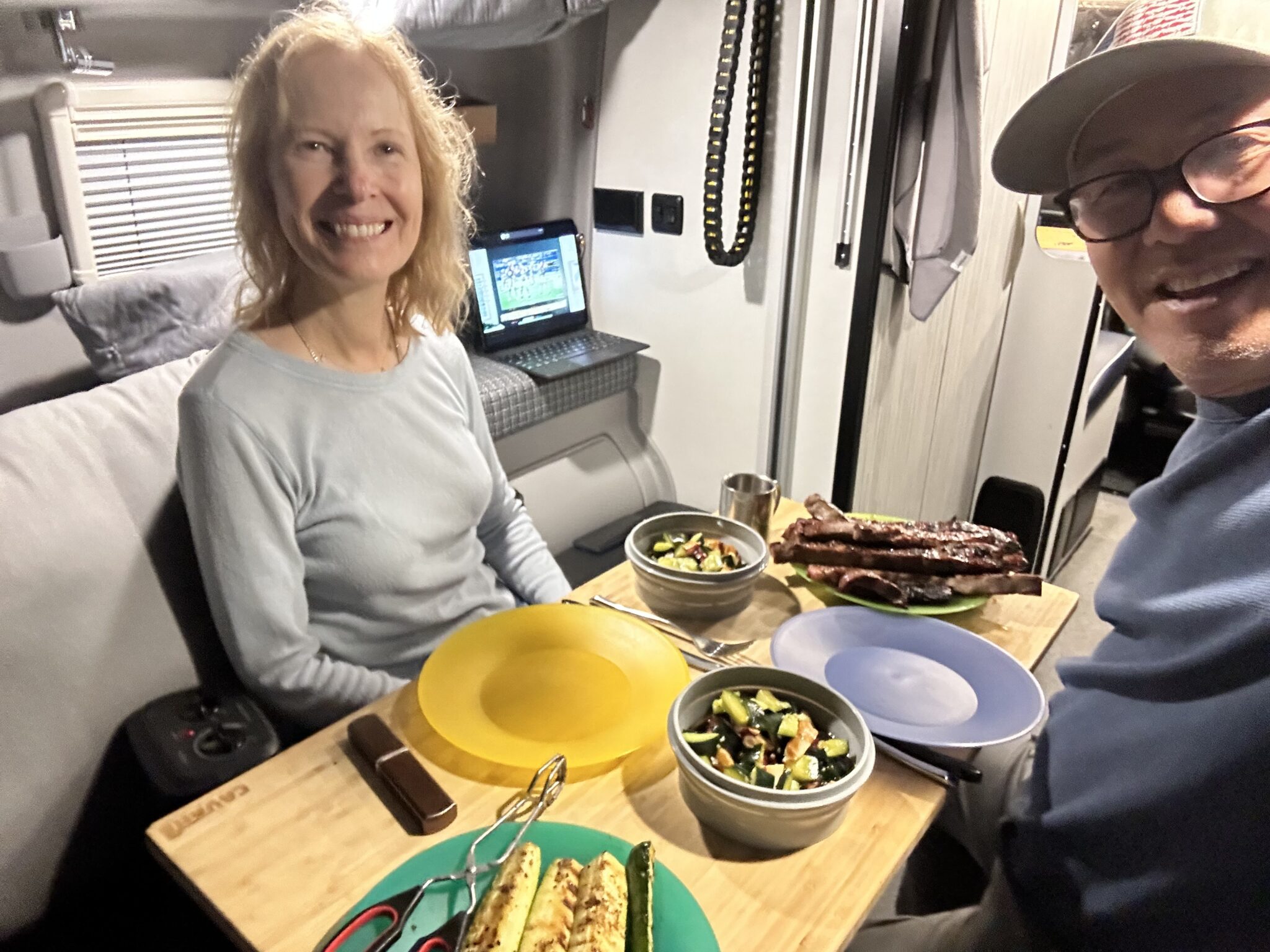 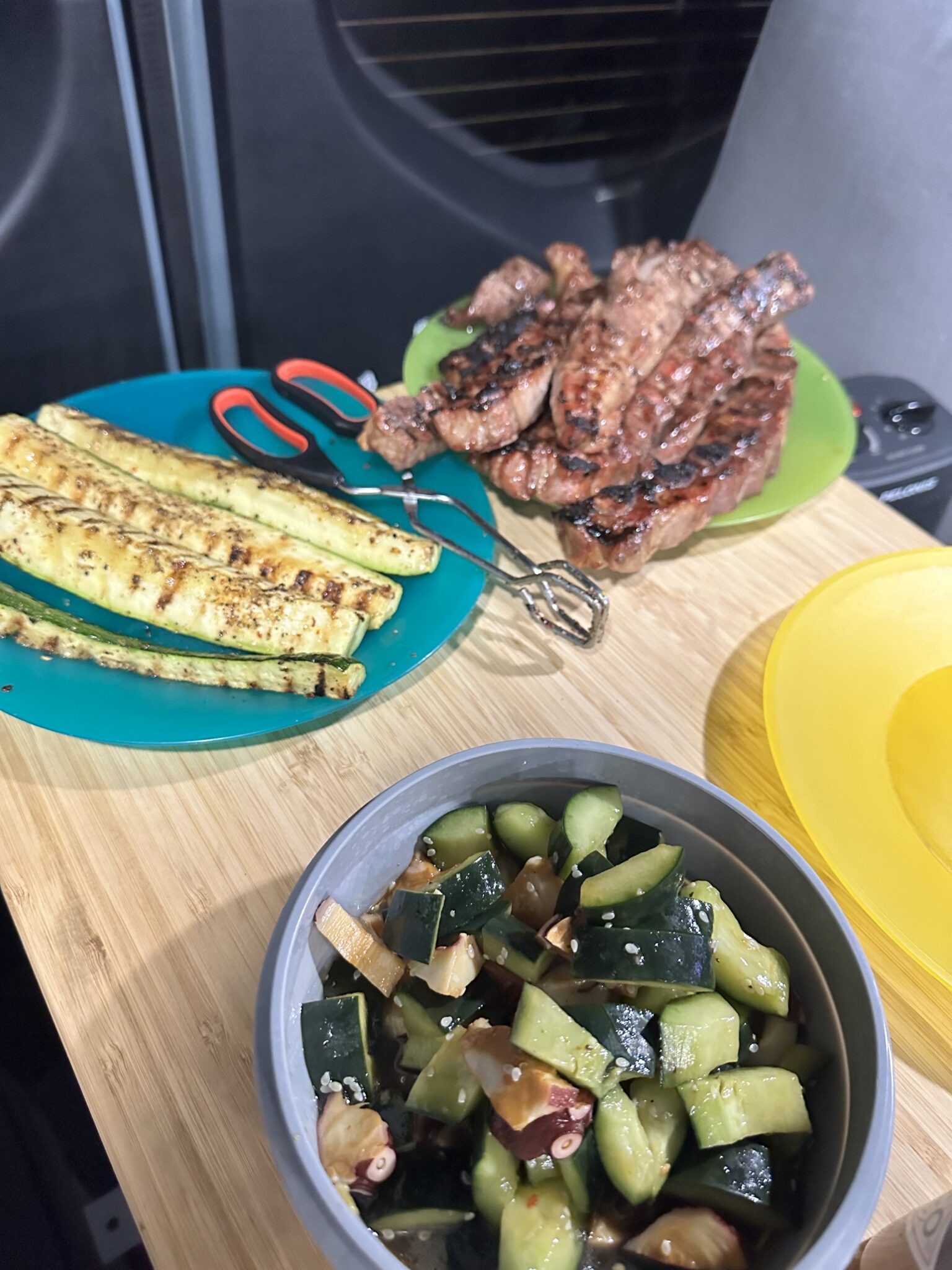 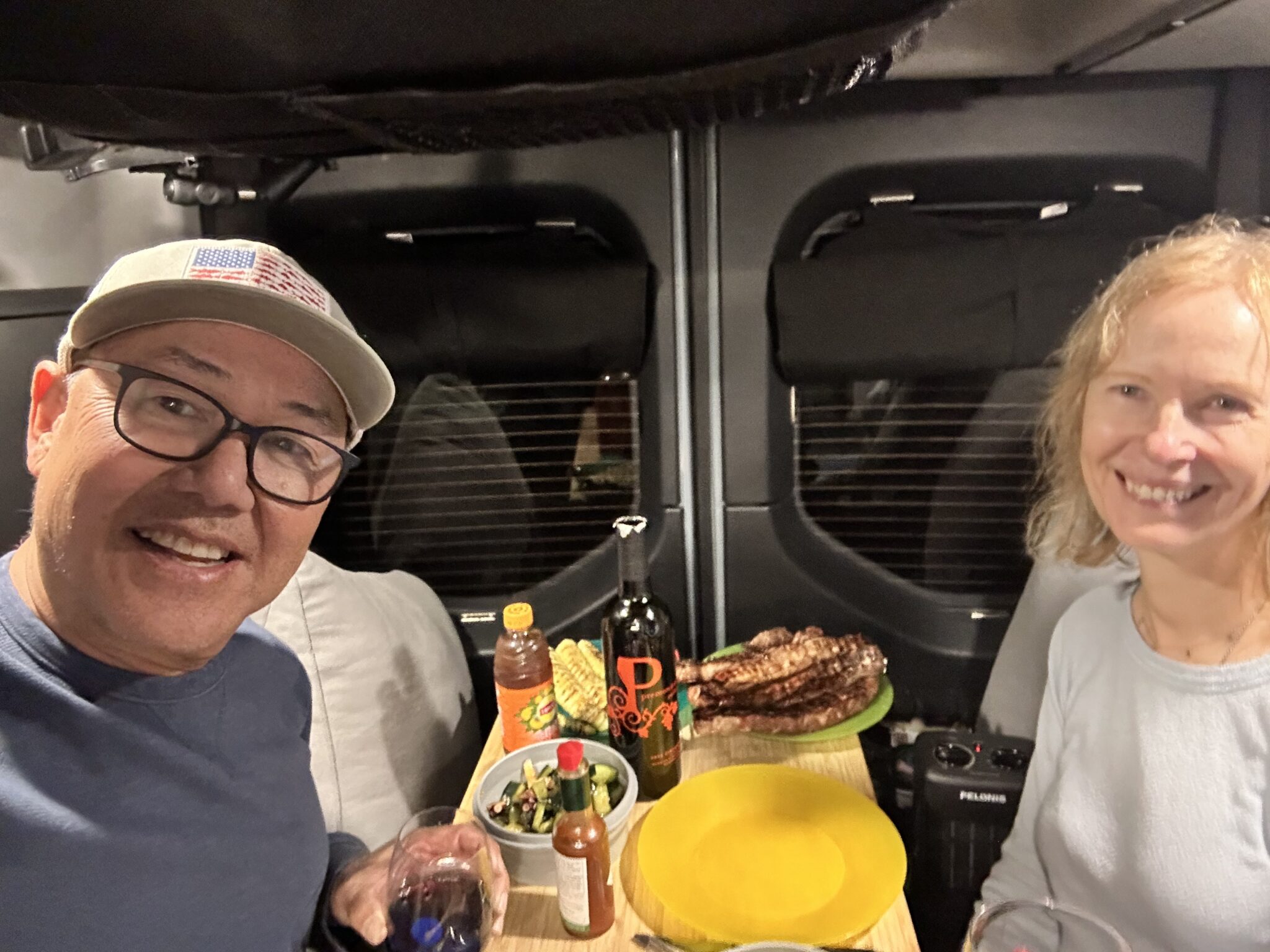 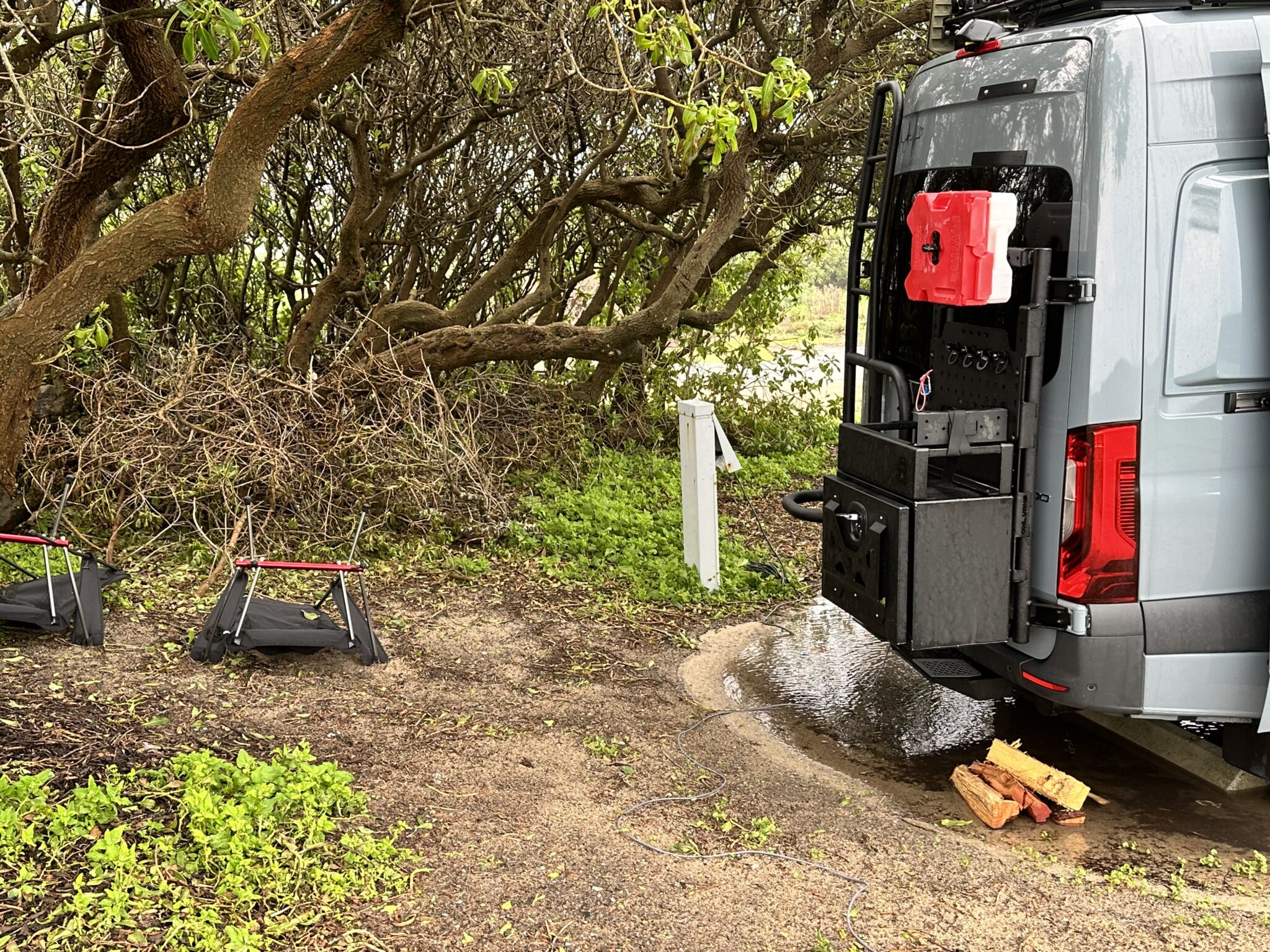 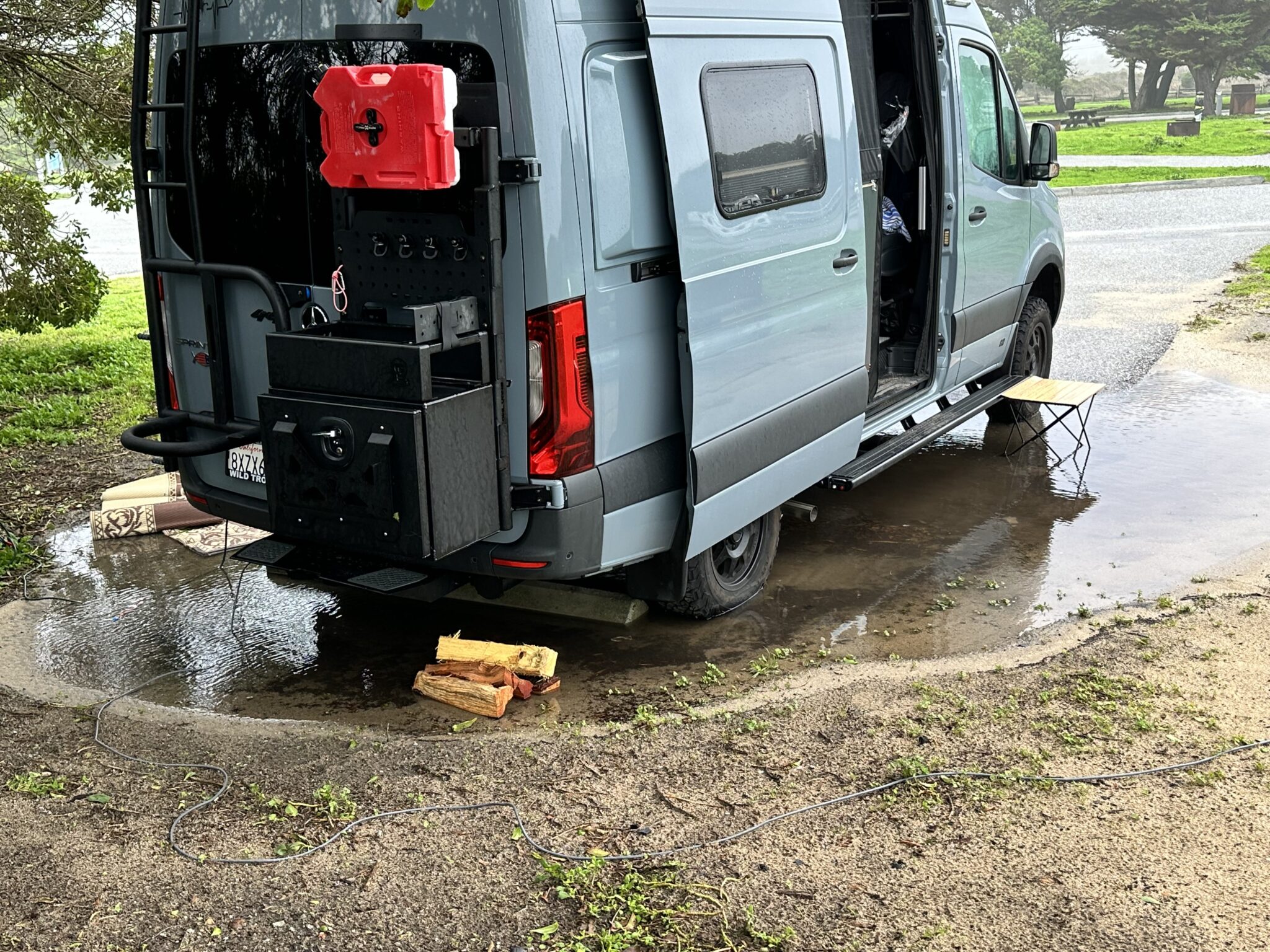 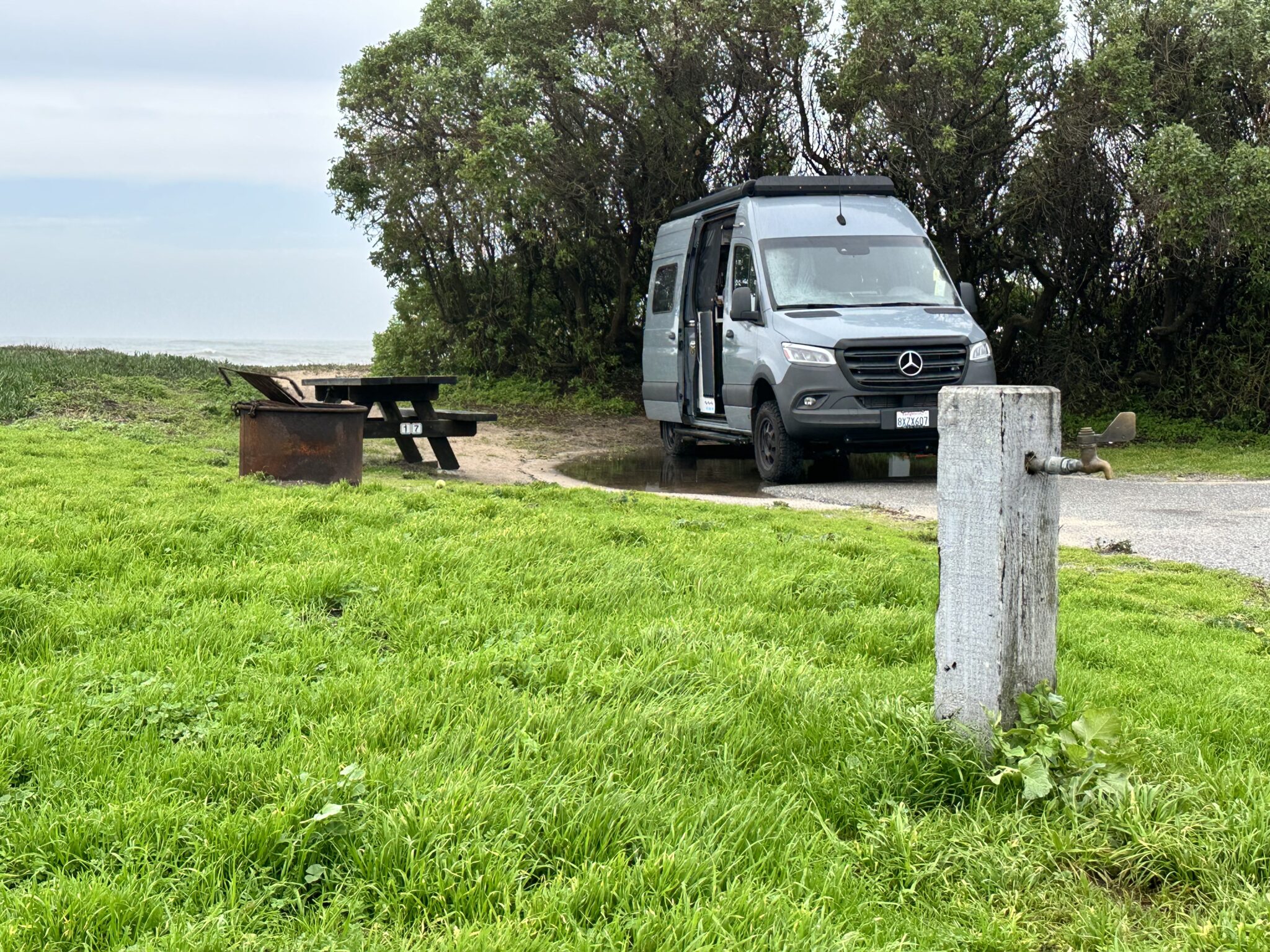 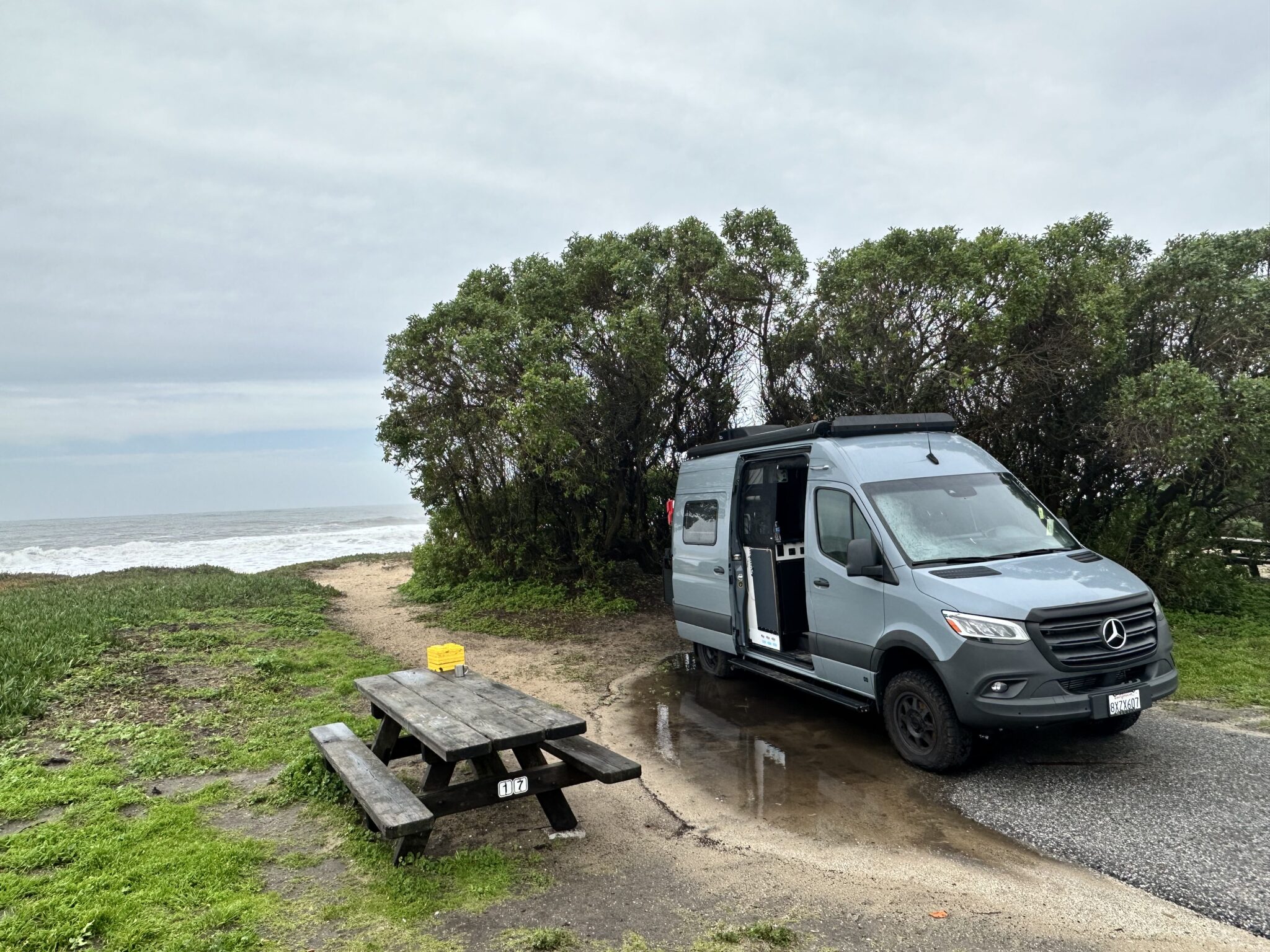 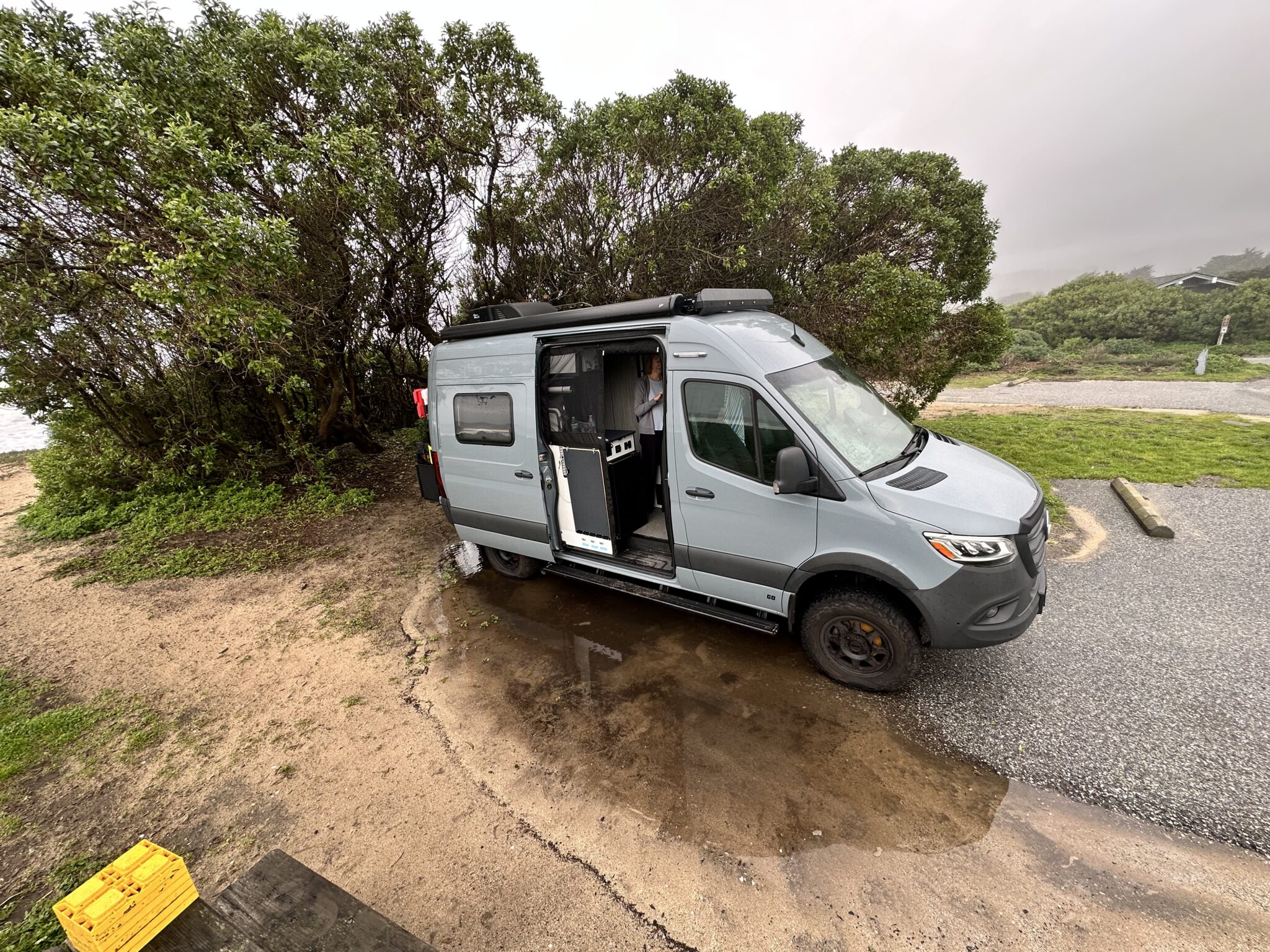