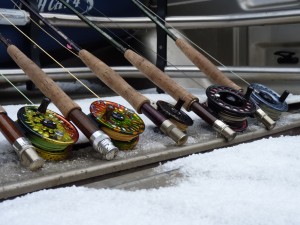 This past week I spent three days,  East of Weed, flyfishing with my Cousin Wayne and his kids Mathew and Michael.  Also, I enjoyed fishing with my Uncle Yun who is still going strong into his 80s.  He reminds me so much of my late father that it’s as if he was fishing with us.  Happy Birthday Uncle.   I can’t praise Antelope Creek Lodge enough. It is a fantastic destination for flyfishermen.  Ive been to many lodges but few have had the hospitality and quality that this lodge has.  It was one of the most comfortable lodges I have ever stayed in and the staff is great.  We caught so many fish, we lost count; they hit everything and frequently.  I think we have found our destination for our family reunions here.  Even the non fishing women would enjoy this lodge.  A freak snowstorm made it a little cold, but it made the lodge even better with a hot fire to return to after fishing.  The food was A+.

Mathew and Michael never fail to amaze me.  They are truly two of the best 8 year old flyfishermen I have ever met and they are my nephews.   Both were casting heavy shooting heads (up to 350 grain)  with ease and both hooked and landed +20inch fish  on 2.5 wgt rods in the stream.    They fished from morning to darkness with no complaints and they landed there own fish and tied their own knots much of the time.   Wayne and Muffy have raised some amazingly talented kids.  I believe that the twins will be famous someday in flyfishing circles–I started a new blog on them called  “Syns, Twins and Fins“.

I shot this short film with a  Lumix GH2 (terrestrial). On a side note, I heard last week that ALL Gh1s are now hackable!  Its time to pick one up cheap as a second awesome video camera.    The coolest shots were done underwater with a GOPRO Hero HD with a modified flat lens kit and an extension jib  fashioned out of a collapsible wading staff. The fish were very co-operative with the camera and actually would swim toward it to check it out.   I  recorded fish hitting the flies (20:46) and even the split shot (16:31). Also check out the mayfly nymphs coming off the bottom at 14:49! That density of Callibaetis Mayflies Nymphs makes me wonder what the dry fly fishing could be there when its hot.

The Wading staff also makes for a pretty good monopod for the GOPRO if the ground or bottom is soft.   Ill test that theory in Alberta in September.