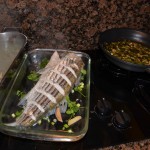 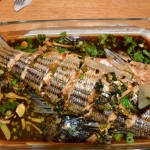 Because Gina wanted a fish to eat for dinner, I fished the forebay this morning from 7:00am  till noon and put 37 fish in the boat. It was awesome and it seemed, for awhile, a fish or a take on every cast.   I went out alone and launched at sunrise. The first thing i did was fish the shallows to the east of the Cottonwood Launch and saw fish breaking but could not get them on a spook. Tried for about an hour. Then I trolled a fly and a rattle trap and headed over to the channel (around the corner past the power lines) to fish the weed line with flies. On the way there, I hooked two fish at the same time, anchored the boat, landed the two fish and then started casting a fly and immediately hooked another two. I left good fishing to get to the channel before 8:00am to see if there was topwater there. As I was cruising with the trolling motor, I spotted some commotion at the weed line;  anchored about twenty feet from it and started catching fish on that white trolling fly– casting. I threw out some clousers in different sizes and also hooked some fish but the white flies worked better. I filmed all of it or so I thought. When I got home, I realized the SD card was full somewhere around 9:00am with Pronghorn footage that I forgot to erase–Shoot (always format the card before shooting the first footage). I did manage to film some of the morning. Lots of fish around 18 inches with a couple at 22–nothing huge yet.

2 thoughts on “Fly Fishing the Flats on O’Neill Forebay”