Im sure if you have been fishing as long as I have, you have phoned a friend with that question on a slow day or wished you could instantly brag about the cool fish you just caught to your buddy down river. Technology has given fisherman new tackle just for that event. I recently learned how to use the “Compass” iphone app to MMS longitude and latittude to another Iphone. With that information imported into google maps, you can pretty much get an arial view of the location not to mention turn by turn directions to the spot–handy when your tracking down kids. But what about being on the water? We already know how easy it is to send a detailed message in the form of a single picture–such as the recent picture my daughter sent me from Berkeley of Police brutality while she was walking to class through a riot. I like sending fish pictures real time  as I catch them to my wife so she knows what to pick up from Whole Foods to cook them that evening.

I started out a few months ago, bringing my Ipad2 out on the lake so I could Slingbox stream football games from my home cable TV while I fished for stripers. There is nifty mount on the dash (Ram Mount) with a plug to send the audio through the boat speakers. It works out pretty good having 13 inch cable tv on the dash of my boat powered by 3G. By far though, my most used apps out on the water are Pandora for music, Slingbox for Football, and a very cool app for Ipad Itouch or Iphone  made by Navionics called Marine USA.  Marine USA gives you a gps location , with  a topographical overlay or a satellite overlay which means if you  hold the  LOCK button down  and push HOME once,  the device (ipad or ipod) will take a snapshot of your map complete with a little arrow showing where you are and a track map of where youve been  if you choose that.    Also you can mark waypoints and link them to photos of fish caught at those waypoints.   With the ability to take a snapshot of the map,  you can easily send that info via MMS messaging or email for instant precise information–no lie. 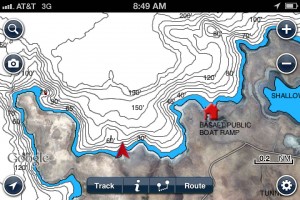 an what I was doing… 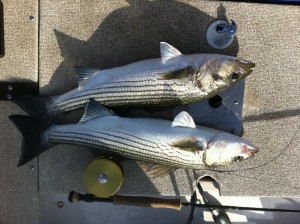 One thought on ““…where are you and how are you doing?””