I was skeptical about this trip when our bi-annual red-fishing trip turned into a family reunion when 10 of my relatives and family ended up going to New Orleans with our fishing group not to fish but to hang out in  New Orleans.  I turned out to be a great vacation after all.  In fact,  it may be my new “favorite destination” to take Mia and Gina if i want a few days of really quality Fly Fishing.    Book a cheap flight to New Orleans, find a nice inexpensive but comfortable accommodation in the French Quarter near Uptown Fly Fishing Shop,  book a guide for three days of Sight Fishing Reds while the girls enjoy the city, shopping and food,  enjoy dinner together every night in a great seafood restaurant! 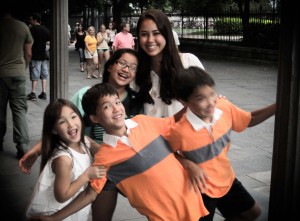 Uncle Yun did great despite his declining health.  He managed two days of  fishing and landed several very large Redfish.   The Syn Twins  (Matthew and Michael)  not only caught most of the fish and the big ones,  they managed to fish every moment of the day,  even after we got off the boats.  The twins put the Big Hurt in the Big Easy on the Big Redfish.   They had fun with the Gar and Mullet in the harbor and caught just about every species of fish in the Mississippi River Delta.  I averaged 4-5 fly caught reds a day with the biggest being 9 lbs  (I guess it was wishful thinking bringing the 30lb Boga Grip).  We even managed to bring 40 lbs of Redfish home in a cooler as checked baggage.  It was opened and inspected by the airline, but none of the fish was missing or defrosted.

My foody family dined at Emril’s New Orleans one night and tasted for the first timeand amazing fish called a “Drum”.  They soon called me to ask me if I could catch some to bring home and I explained to them that Redfish are Drum–Red Drum BAM!   Red drum, puppy drum, channel bass, rat red and bull red are all the same fish.  In 1979 biologist noticed that the demand for redfish and the resulting commercial and recreational fishing pressure was eradicating redfish.  In 1981 legislation was passed to ban commercial fishing for redfish however several farms have been established to supply commercial restaurants with redfish. Chef Paul Prudhomme gave Redfish Gourmet status when he introduced Blacked Redfish in the 80s and  Redfish was the secret ingredient on the IRON CHEF America show during an episode in 1990.  Between  the Raw Oysters, Softshell Crab, shrimp and fish,  the Mississippi Delta is hard to beat for good seafood.

On this trip, we booked with several guides in Lafitte Louisiana, about an hour east of New Orleans.  There are only three restaurants in Lafitte and we ate at all of them.  The lodge was “Colonial Motorhome”  and people were friendly and accommodating.  We couldn’t find any raw oysters but the soft shell crab and fried everything was pretty tasty despite being bad for you.  There are some communities in New Orleans where the average lifespan is 55 due to obesity and poor diet.    New Orleans despite its fascinating American history is still much like a third world country when it comes to health and education.

We booked “non ” fly fishing guides for the boys and Uncle but I think in the future  Id rather pay the extra money for fly fishing guides.  Despite the fact the both guides had hardly every seen a fly fisherman catch a redfish,  they wont forget us after this last weekend.  Wayne and I hooked reds fishing in the back of the boat despite the guides pummeling  the “virgin”  water at the head of the boat with spoons and jigs as they worked the trolling motor off the Bow.    Also,  note to self,  bring a stripping basket!  There was so much hardware on the floor of the boat where I was casting that I was forced to use the pee buckets as a Cajun Stripping Basket..   We landed lots of fish blind casting the bank and a few fish sight fishing to tailing and cruising fish but I know a  fly fishing guide from New Orleans would have put us on more opportunities with a poled flats boat.  I dont think its called  “Guiding” when the guide is fishing and catching most of the fish but then his boat, his rules.

The New Go Pro remotes were a bit anemic since it was usually an hour of bling casting before any good footage.  Leaving a unit on all the time is the way to go for days where you catch less than 10 fish.   I think the double battery pac plus a 32 gig SD card is the ticket.

Mark got back from his Senior Hawaii Trip the day we left.   I have a feeling its better to NOT know what exactly went on in Waikiki but he got home safe and healthy.   He is due for his ACL reconstruction tomorrow.   While we were away,  he managed to snag two Field Club Tickets to the historic Giants No-Hitter!  He and his girlfriend Phoebe watched the Giants own the Astros on Wednesday Night.   How lucky for him to have picked that game but being huge giants fans,  we deserve luck like that.   It was also fun watching the US open on our iPhones as we went from fishing hole to fishing hole.  I kinda felt like Tiger Woods on this fishing trip-expecting a big comeback and getting humiliated by a couple younger upstarts.

Video of Just the Boys