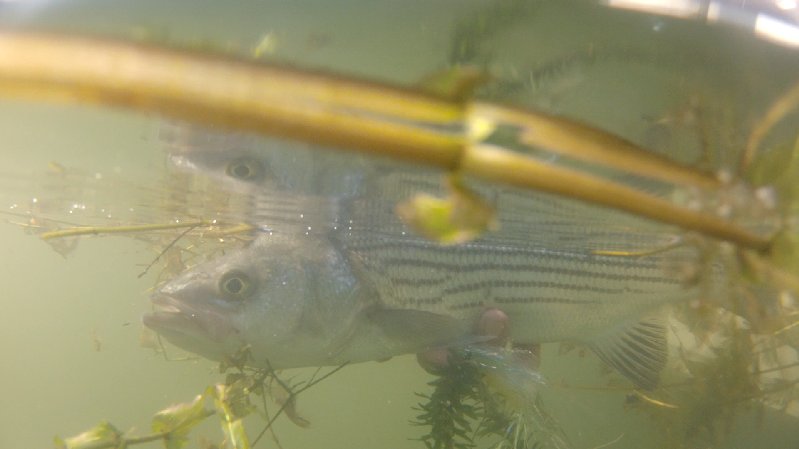 Fishing San Luis is like a new ride at Disneyland   You stand in line for hours  for 3 minutes of thrill.  No fastpass,  no shortcuts,  just hours of painful waiting.   Monday was like that.    The unseasonable hot weather and lack of wind was the  the only excuse I needed for a Monday fishing trip.  The day after  Daylight Saving Time fall back made my normal  5:00 am wakeup seem late.  It was daybreak on the way to the lake.  Hopefully fishing pressure would be light this day before election day.  Only one other boat  beat me onto the  Forebay at 7:00 am.

I spent Saturday, relining my fly reels and extra spools.  I have four  8wgts, and one 6 wgt in the boat.   I have rigged,  an 8 wgt floating line with an olive  gurgler,   an 8 wgt  with a Rio Short, an 8wgt  with a Slime Line Intermediate   an 8 wgt  with a Airflow HD Level sinking trolling  line,  and a 6 wgt  with a tuned t-14.  I wonder what the perfect San Luis Striper rod should be.   It should be long so I can cast heavy flies overhead in my boat so I wont hit anybody casting next to me.  It  should be fast so I can throw heavy flies with a shooting head a mile with one false cast while keeping some height on my forward cast loop.   It should have backbone  so  I can drive hooks deep on the set.   It should be lightweight so I can cast all day despite my torn rotator cuff.  Finally,  it should be strong enough to take a hit from a weighted Clouser  and  be able to handle a 30 lb fish.   Im looking at a  9.5 foot 7 wgt Sage One.

From 6:00 am to 1:00pm  I fished the trench,  the flats on both sides of the trench,  all around the islands, the flats between the islands and Mederos Launch with out a single fish.  In desperation,  I trolled the long side of the dam with big lures and got zip.   I spent hours slowly  navigating  the shallow flats.  The weeds were all but gone accept in the 3 foot depths and I crissed crossed the  flats looking for some minnows and feeding fish.   I did see a couple swirls in the shallows but didn’t see any fish and most were too far and I couldn’t get on them fast enough.   Tired and frustrated casting and stripping  the 8 wgt  all afternoon I was ready to give up and go home.   My arms felt like lead and my hand was spasming from stripping the fly.    That violent, fast stripping involves fast arm movements and  forceful gripping of the line  so that a striper doesn’t pull the line out of your hands on the set.   Seven hours of that routine is debilitating.     I was about to call it a day when I decided to go try the rock wall at the  inlet.  Dave Bearden told me that he and his dad would catch tons of fish off that wall.   I motored to the inlet before the barrier and started fishing 40 feet  off the bank  setting the I-Pilot to navigate up the wall about 30 feet out..   To my suprise, the entire wall was very productive.  I had fish following my fly, and  occasionally,  I spotted a few  small minnows jumping out of the water  and always found a fish below them.   I ended up catching about 20 fish from 1-3 pm ,  Most were keepers and I lost one big one.  I noticed I lost more fish (three), fishing the 6 wgt Z-axis.   I think its harder to set the hook into the fish even though it feels like a clean set with the lighter rod.  Maybe set twice as hard  and use sharper hooks is the ticket.   Seems like the flashtail clouser outfished the marabou by a small margin today.    There was one other flyfishermen camped out in a pram on the Mederos flats (to the right of the launch close to the inlet).  Despite seeing me make that run on the wall half a dozen times with fish,  he didn’t move so I assume something was going on over there.   That would be lots of fun if the fish were over there.   Next time Ill try that.