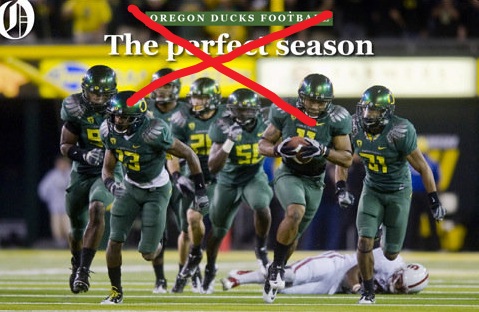 For all great upsets, there is an equal and opposite despair. So ends the perfect season. Ducks football will survive and get stronger with three more years of eligibility for key players. There is nobody to blame. So many close plays. I just can’t bear to think of it right now but time will heal.

Still a chance for post season? Hardly. To go to the Rose Bowl, with Stanford 7-1 with the Ducks, If they beat UCLA next week, they will tie Oregon at 8 and 1 (if we win the Civil War) and we still lose because they beat Oregon but tied standings. They have to lose to UCLA and that is unlikely, if Ducks are destined to return to the Rose Bowl.

In the BCS, since an SEC team with a highest standing is usually chosen  Undefeated ND has to lose to USC and Florida State has to lose to drop the top standings below a team outside of the SEC. Its complicated but for Oregon to even have a chance at the BCS title game, FLORIDA AND NOTRE DAME must lose. Not likely.

We are dead ducks. How a one loss team as good as the DUCKS can have no post season with one freak loss is harsh. I should have expected it when Romney lost the election. Nevertheless, I pray for miracles. UCLA needs to beat down Stanford like they did USC and if by chance they do, and by chance they beat the DUCKS in the PAC12 playoff, I will tip my hat and say well earned. How in the hell did CAL beat UCLA?

Tonight, Cal got its ass whooped by Oregon State officially making this years CAL season the worst ever.  I’m sure Tedford feels more depressed than I about todays events.