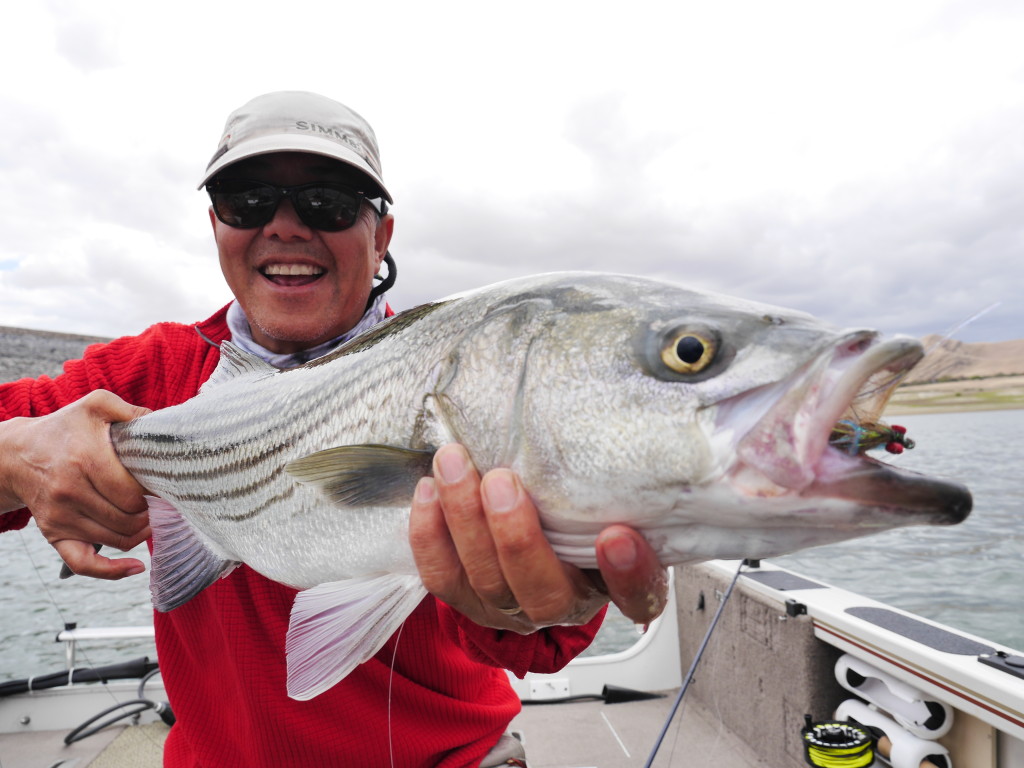 Sometimes I think that I’m jinxed.  Statistically, one would think that if you catch enough fish ,  that a couple of them should be big.  That elusive 10 lb mark in San Luis. seemed  to elude me this year–its been 5 months for Pete’s sake.    I can still hear the advice of the old pros,  “You gots to put your time in, son….”.   Still sounds like statistics to me.  The lake was all mine this Monday morning and it’s the first week of May–Pig Time.   I was the third boat at Basalt at 9:00am.  The skys were cloudy and it looked like I might be rained off the lake–perfect weather for big fish.   What a contrast from two days ago in the 95 degree sun.  The water temp was 66 degrees and the Solonar tables predicted a great day with a peak at 10:30.   Luckily the winds were pretty mild.

I decided to run to the trash racks where we had been doing great the last three outs.  Something was going on inside the trash racks,  There were two dozen people making all sorts of racket .  The horn would go off now and the and loud machinery was running all morning. The Dam Police never showed up so I positioned myself up close to the racks and fished to the shore.  All the sweet spots metered fish at 20-25 feet.   I learned to tweek the settings on my Lowrance HD 10 side sonar the night before and I finally think Im using it right.  To my suprise,  I only picked up two fish in two hours.   Another boat, trolling minnows with side surface planers, showed up and we both had a tough time getting the fish to bite.    The few hits there were, were very light, and I switched out flies all morning.  It seems the size 1 yellow clousers were the best.  By noon,  I was ready to go home.–It sucked compared to Saturday.  It started to sprinkle and the wind was building and I was out there basically alone.  I did see one other flyfisherman over at the Romero corner of the dam but they took off for Cottonwood at around 10am frustrated as well.  The slow fishing, I thought, was a sign to go over to the Bay of Pigs and work the dam.   The wind was blowing across lake. I positioned the boat  upwind and set the IPilot to hold me into the wind at an angle.    I was metering fish at 20-25 feet in 68 feet of water but couldn’t get any of them to take.  I learned a way to measure the sonar arc to estimate the size of the fish and there were some big fish in the Bay of Pigs.    Casting the big Brown and Blue directly back from the boat,  I worked the shoreline and I started picking up fish when I got close and casts directly to the rocks.  In an hour,  I had 6 fish with two over 10 lbs. One of the pigs was caught on the Blue and Brown Clouser, and the other on a small yellow clouser.    To think I was ready to quit at noon.  Joy is when Pigs Fly.  I left at 2:00 PM.  Best day of the year.

At 11:00 an F16 Jet fighter flew under the cloud layer over the lake.  Very cool.  I though it might be another way of telling me to get away from the structure!