Check out this REAL live air broadcast by our own KTVU Channel 2 News Station in the Bay area.   She didn’t even get it when she read it. 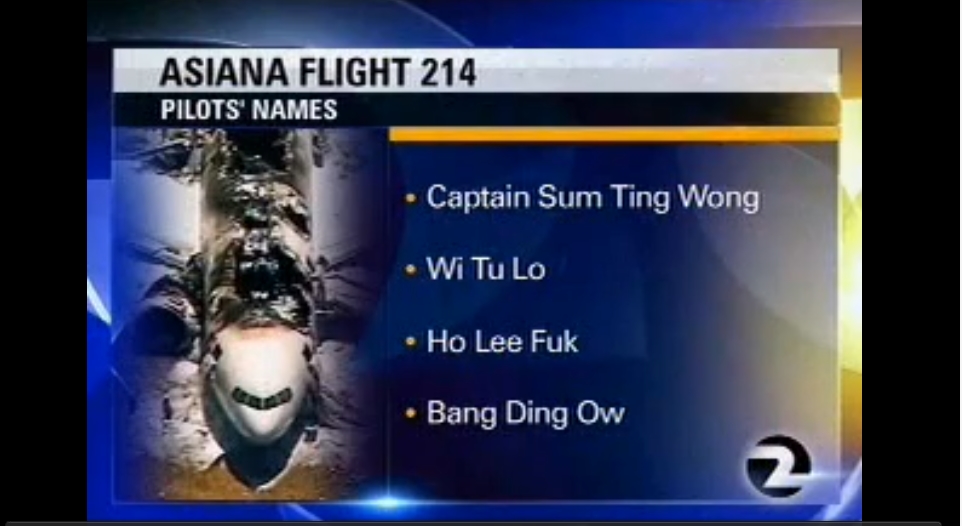 The correct names of the pilots in the cockpit were Lee Gang-guk and Lee Jeong-Min.  What ‘s more disturbing is that they reported that NTSB officials confirmed these names to them earlier today.  Either the NTSB is racist and KNTV is stupid or KNTV is stupid and Liars.

At least it only took the San Francisco based station till the end of the broadcast for someone  (probably the asian cameraman) to figure out they were fake names and issue an on air apology.   Somebody lost there job for sure –probably the asian.

“We sincerely regret the error and took immediate action to apologize, both in the newscast where the mistake occurred, as well as on our website and social media sites,” said Tom Raponi, KTVU/KICU Vice President & General Manager. “Nothing is more important to us than having the highest level of accuracy and integrity, and we are reviewing our procedures to ensure this type of error does not happen again.”