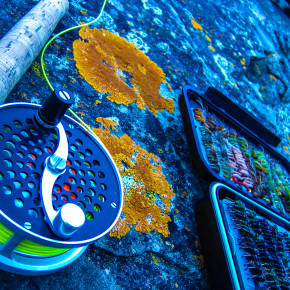 After the massive floods that hit Alberta only a couple months ago, it was good to know that the rivers of Alberta can survive the big flush and still hold hungry trout.   As usual, there were unique opportunities and situations that make returning to Alberta a ritual, like Wayne’s fish that jumped onto the bank and back into the water on the hook set.  This annual trip goes a long way in recharging my enthusiasm and passion for trout fishing.  For me , it was unique in that the first fish and the last fish of the trip were the biggest of the entire week–bookend Rainbow and Brown trout at 24 inches.  The Waterton and all the local rivers were running higher than normal due to some heavy rain a couple weeks before.  The fish were not on the hoppers like last year.  Instead,  we concentrated on the lower sections that were harder to reach.  Indicator fishing with  Cowboy Leeches and Caddis Puppa was very effective, even though there was enough action on the hoppers to keep trying.  My best rainbow of the trip was on a Hopper not three feet from shore–a nice chrome  “steelhead-ish”, fish that took me into the backing right now and pushed the limits of my 10 foot 4 wgt Helios rod.   The Lamson Vanquish reel handled the week long drag festival with fish after fish smokin’ line to backing daily.  The fish in river X make you think a 20 inchers is a “smaller” fish.  Speaking of smaller fish,  there were tons of 12-16 inch fish in the river like we have never seen.  With ideal spawning conditions the last couple years,  River X is going to be spectacular in a couple years if there is no big fish kill.  Despite the rough conditions on River X,  our group hooked over 300 fish last week when some other groups had terrible luck.   Victor of the Redding Fly Shop, and Kenny of the California  Department of Fish and Game,  joined us this year and added some real talent to our group.   In their first trip ever to River X,  they showed how versatile they are by out fishing most us.  We also had the opportunity to fish the Castle, and Waterton Rivers for Cuthroats and Browns and the spring fed Palmer Ponds. The ponds have definitely improved and hold some trout as large as 20 pounds.  One evening, Victor and I managed to hook 5 fish in an hour right before dark.  Wayne caught an unusually large brown – 27inches – on one of the Waterton floats.  Jon Leonard also caught quit a few good browns on the float as well.  My partner, Rolland,  who I have fished with for years,  is still fishing strong and healthy in his 70s.  He inspires me to take care of myself so I can fish like that in 20 years.  The night before we left,  I tried casting a 2 inch sculpin streamers on the river by the lodge and managed to catch a pair of large browns swinging sinking lines right before dark after dinner.  Next year I will definitely be more prepared to fish large streamers in the Waterton with perhaps a spey rod or a  heavier 7 wgt rod.  Some new equipment that was tested this year that have become a part of my regular gear — Cowboy Leeches,  Swisher Clumpas, Swisher tube weights,  and screw in  boot cleats.  Next year,  I think Ill invest in a good wading staff.  On the longest hike –the death march — we went in 4 miles before fishing our way out.  The guides were great as usual,  Paully ,Greg, and Cam are the hardest working guides in Alberta. Paul and Greg are also two very talented musicians in the band Texas Flood who have a new album in the can ready to release soon. 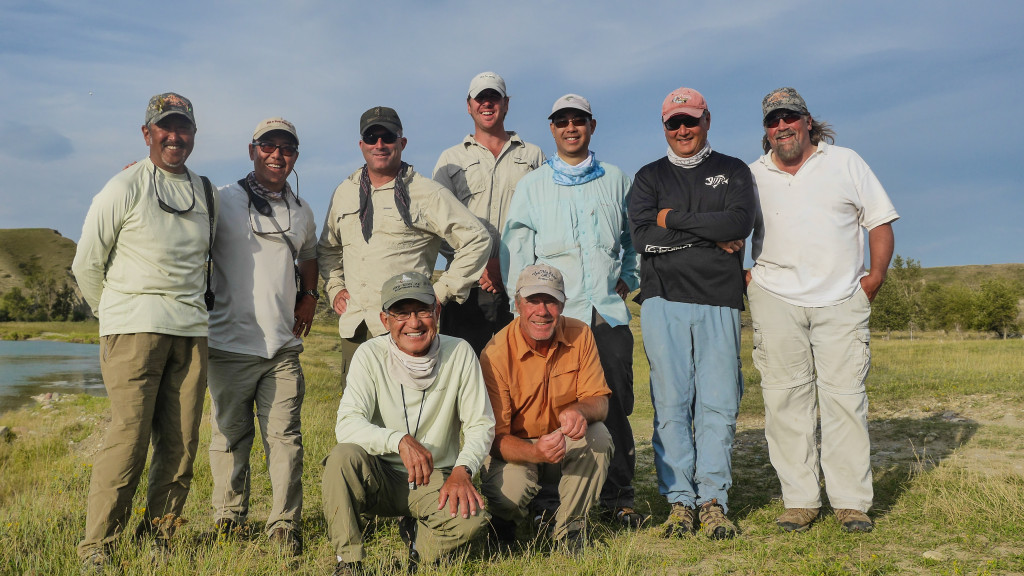