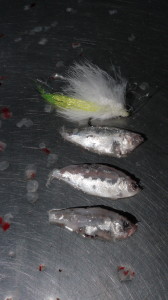 To get pumped to fish the main lake after a 4 month hiatus, I consulted my San Luis buddies last week. One told me that his bait fishing buddies were saying “easy limits” and Vaughn also felt that the bigger fish were in the lake. I also reviewed last years Sept videos and with the lake filling about 2 feet a day, some of the old familiar shorelines were showing. I decided to go look for that September Surface Action. When I arrived at the lake at daybreak, Vaughn was already into a few fish in the cove at the Basalt Launch, and my bait fishing buddy was launching as I drove up. We talked and he told me they would fish the middle of the lake with grass shrimp. They landed 6 fish all over 20 inches by 10am. I decided to troll up the south bank that was productive last year. As soon as I rounded the bend from the ramp, my fish finder was going off. Schools of fish in 40 feet of water were everywhere. I was further off the bank than normal to give the Saturday Morning Shore fishermen some room and I was surprised to find fish in that deep of water. I vertical jigged a bit over some big schools but no grabs. After passing all the shore fishermen, I came to a cove where schools of shad and stripers were busting, Birds were sitting and there was no wind. It was surreal. I couldn’t decide what to throw. At one point I had a Zara Spook, a Crease Fly, A Shad outfit, A trolling fly line and an t14 Rio Shooting head all on deck ready to go. I got one fish on a Zara Spook with a couple blow ups, but most of the surface action I suspect were schools of American Shad. I didn’t get a shot at one with a shad fly and I wonder if they will hit a fly this late in the year. Around 8am, I found a bank with submerged weeds. There were minnows breaking water everywhere and it seemed that a school of something was making the local baitfish nervous and jumpy. I managed to hook a dozen fish moving up and down the weed bed and then at 10am they were no where to be seen. I picked up a couple more in deeper water casting behind me away from the bank. It seems the fish move into deeper water as the morning progresses. The fish in the main lake were definitely averaging bigger at around 21 inches. My largest was 6 lbs. I kept a couple school Stripers for Gina and while cleaning them, I found some shad in them. They were big ones.