After fishing the lake for 40 years, I am amazed that there is still so much to learn about the stripers in this lake. I hit the lake Saturday and Sunday at the break of day till noon and had some of the best topwater striper fishing yet.  It was surreal to see how the stripers were feeding.   There  were the obvious explosions on shad.  I managed to clean out a couple from the intestinal track of last weeks catch and the shad in the lake are around three inches long.  There were however, a bunch of what seemed to be smaller minnows jumping around in the weeds near the shoreline.  Even the boat launch had large amounts of what seem to be minnows jumping around.  After Monday morning, I think I’m wrong about minnows.  I talked to a couple old asian bait fishermen at the dock on Monday Morning and they were wading around the shallows catching GRASS SHRIMP with a net.   I had suspected there were grass shrimp in the lake since I had found fish stuffed with them,  but I wasnt sure they were a main forage for stripers until I witnessed these guys catching shrimp, baitfishing with them and landing stripers on them.  Apparently there are TONS of grass shrimp in the lake and they had a bucket full to prove it.   After reading up on grass shrimp, it turns out that they do come to the surface in the mornings.  It could be that those jumpy things at the dock are actually shrimp and not minnows. 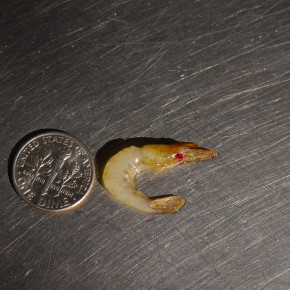 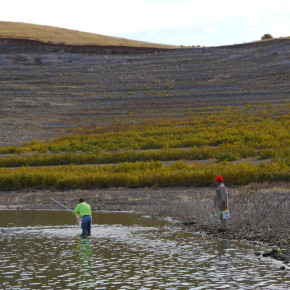 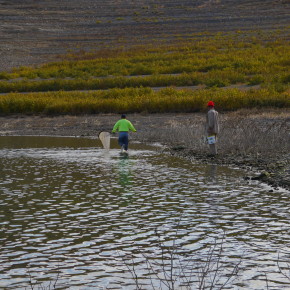 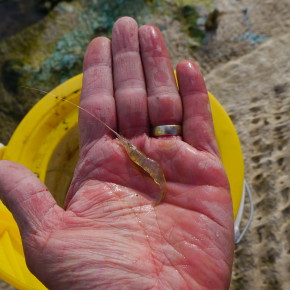 The  fish in the morning appeared to be cruising in schools along the shoreline sipping something just below the surface.  Occasionally they would crash a bait on the shoreline but in general the schools of fish were definitely feeding subsurface and they were Stripers and not shad  since I was able to cast poppers into the feeding fish getting some to strike.   I brought a few redfish floating shrimp patterns out with me on Monday and they did work well but not great.  I hooked two fish on them floating in the film in the deeper water over feeding schools,  but I didn’t try them on the shallow water feeding fish although I though they were  a bit large and too dark brown.   I found a floating Crease fly shrimp pattern that I will tie for next week.  I can’t wait to try floating shrimp patterns on those feeding fish at the banks. 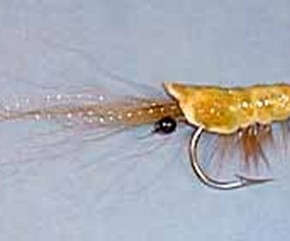 The Crease fly surface fishing was awesome.  It was not a sure thing when you saw fish busting,  and I got hit a couple times not paying attention after stripping it over the school with no reaction.  I think the technique is to let it sit a bit between twitches and then retrieve.  I noticed the stripers would sometimes just nip at it a couple times and then crash it the thrid or fourth twitch if you had the nerve to not try to set.  Like tarpon,  its best to keep stripping till you feel weight and then set.  Even though it felt a bit like trout fishing, its best to resist setting and keep stripping no matter how much the fish molests the popper.  One fish hit it so hard while I was messing with the GoPro that it ripped the rod out of my hand and left me holding and trying to set with just the fly line in hand – Amateur hour caught on film.  Im pretty sure the fish are keying in on shrimp and will hit the crease fly as a target of opportunity.  I sure would love to see a 100 percent crash rate on a floating shrimp fly–it could just be the ticket.

Fishing a clouser over feeding fish is pretty much a sure thing.  I’ve got tons of line and teeth cuts on my hands to prove it.   When the fishing was fast and furious,  I had three flyrods on deck with all the line stripped out in baskets–a crease fly on a Rio Redfish Floating head, a floating shrimp on a WF Floating bonefish line, and a Clouser on the Airflow Custom Cut t14.  It looked a bit like a Chinese fishing junk.  I would cylcle 4 cast of the popper, then 2 with the shrimp and finally the clouser until I hooked a fish over a particular school.    This morning,  I was ready for anything.  Yesterday,  I didn’t know what to throw and it was a gory mess during the Melee hours.  I chased schools of fish till my trolling motor was smoking.  I was scanning the bay while fishing like a kid in a candy store.  Both mornings were 20 fish mornings but I did develop a taste for the surface flies over the clouser–way more exciting even if it meant catching one fish on top to a deep stripped clouser’s three.

Len Bearden once told me that if you were on the water and the sun had already rose,  you were late.   He was right.  It’s all over by 8:30.

Another Nobel Prize for a Berkeley Professor.  This one was one of Mia’s physiology instructors at CAL.  At least that makes up for their pathetic football season. I think Leland High School could be CAL today.  On the other hand,  the Oregon Ducks look strong and I the 49r’s are coming back.  With Northwestern almost beating Ohio State,  there is actually a slim possibility of a Northwestern | Oregon Ducks Rose Bowl.  You heard it first here. 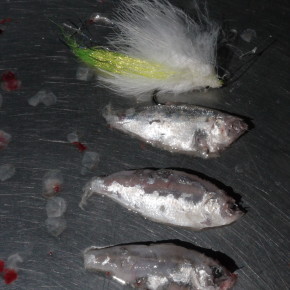