I took my buddy Rick to the main lake today for a couple hours of topwater.   Unlike yesterday,  there was no line at the gate for inspections.  We arrived at 6:30 and it was dark.   We were boat number 3.   They seem to be letting more water out of the lake and there is a new sign saying that you should only launch with 4WD.    We zoomed over to the point and looked for shore activity.  There was an occasional swirl in the shallow waters but no crazy feeding as in weeks past.  I really wanted to get Rick on some surface fish so I had him cast a popper with a spinning rod which gave him more range and the ability to hit a feeding fish faster.  He managed to get one  in the morning and was very happy.  The lake started off in the morning with a ripple from a slight breeze but by 7:30 it was glass and we spotted large schools of stripers feeding on the surface.  Rick couldn’t believe his eyes.  He managed another fish on a popper and we chased those schools till they went down throwing  crease flies, closers, rattle traps and Poppers with occasional success.  After the fish went down around 8:30,  we went back to exploring the shallows with small clousers.  Rick got two and we called it a day at 10:00am. 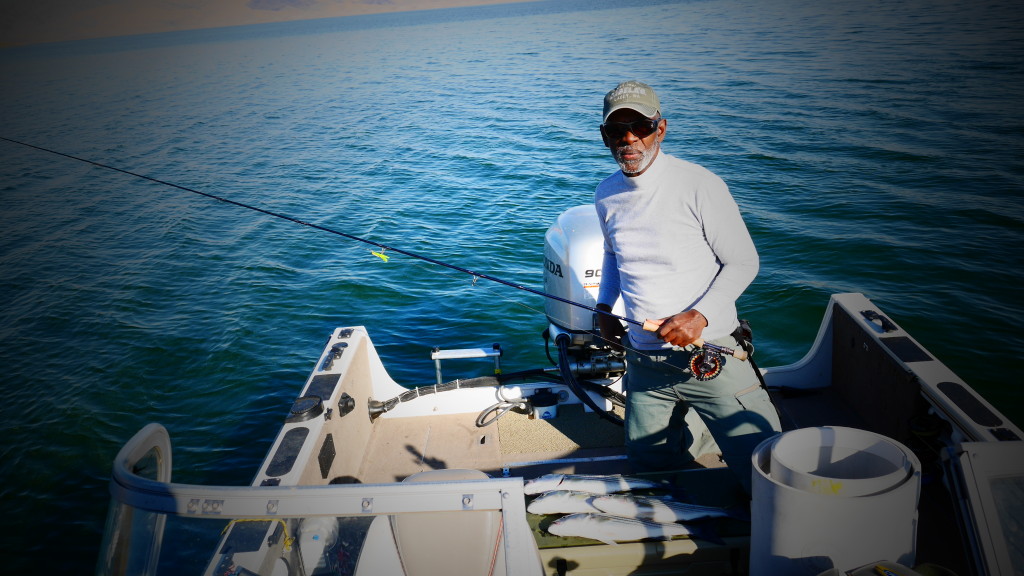 The Niners looked great against Tennessee.  The Oregon Ducks look unstoppable.  Turns out the Marcus Mariota is a Physiology major like Mark and Mark has had classes with him.  Mark describes him as a quiet, modest , family oriented guy.  I bet he sticks out all four years at Oregon like Andrew Luck did before he becomes a free agent.  I bet he wins the Heisman Trophy.   Marcus Mariota is eligible next year for the NFL.