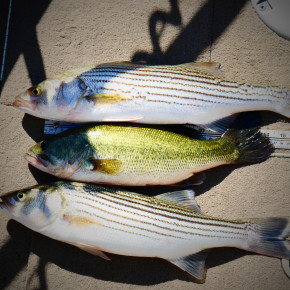 Ive never been in a longer line to launch at the lake than today.   Could it be the BART Strike or Government shutdown?  Is this were they show up when they aren’t working?    I got to my regular spot  late this morning around 7:30 and I saw a boat working my favorite bank.  Turns out it was Vaughn.  He was able to launch earlier and said the bite was hot that first hour of the day.  The Solonar Table indicated a 4 star (out of 4) day even though there was a full moon all last night.   I started out by fishing around the corner from Vaughn right on the shoreline and managed a couple fish on clousers including a 5 pound LMB but there was very little surface activity compared to  last week.  Even though there was surface blowups occasionally,  it was hard to get them to hit a surface fly.   In fact,  I fished about half an hour total without any fish on the crease fly.   There was a bit more breeze also which I think breaks up the algae on the top of the water and without the surface algae, no chironomids.  About 8:30,  the shore action started to pick up in the cove in  10 feet of water.   I managed to catch 14 fish in the cove stripping a size 1 yellow rattled clouser with big aluminum eyes.   One of the fish I caught had what looked like a hemorrhoid–never seen that before.  And another fish had a 12 inch piece of leader with moss on it trailing from a healed wound in its lip.   The fish was only 20 inches and it was an old wound because it was completely healed around the mono and the hook was so deep it couldn’t be seen.   I trimmed the mono intra orally  and released the fish.  Amazing it survived with dragging that mono for a year.   The Black Bass had three sculpin in it stomach. The Stripers were empty. Tomorrow I dont know what to expect. I’m guiding Rick around and Im going to try to have him cast clousers at shore fish.  The lake is dropping again.  The launch was moved from the main launch to the alternate launch at Basalt.