It was a freaky morning at the lake with the stripers acting like trout again. What a difference a day makes.   Today’s solonar was a bit better and the air temperature was about 2 degrees warmer.  I did get on the lake 20 minutes earlier and the wind laid down until 10am makeing the lake like glass.  This time, the autopsy gave different results.  The stripers were feeding heavily on surface midge pupa. 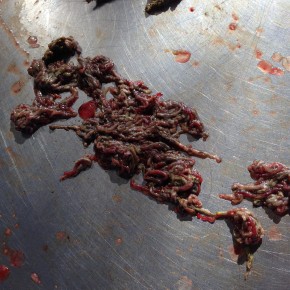 Thats right – not minnows and not grass shrimp. Both autopsied fish were stuffed full of green chironomids and bloodworms.    Along the shoreline early in the morning, stripers were cruising 6 inches of water gorging on hatching chironomids.  Imagine 50 yards of shoreline ringed with rising stripers as they finessed small bugs into those big tough mouths–unreal.  I managed to jump some  cruising fish with a Crease Fly in the early morning right on the shoreline in a foot of water and like clockwork, as soon as the sun hit the water,  the action slowed down and the fish seemed to head deep.  At 8:30  the lake was flat  and I spied a bunch of seagulls  sitting in deep water about 100 yards outside.  For kicks,  I motored over to them and then I saw it.  Three large schools of fish moving in different directions slowly gulping and swimming just like  the gulpers in Hebgen lake except lots of them.  I could see those sharp dorsal fins sticking out of the water as they slowly cruised the green algae slicks feasting on subsurface chironomids.  I couldn’t convince myself to throw a Chironomid under and indicator at a 24 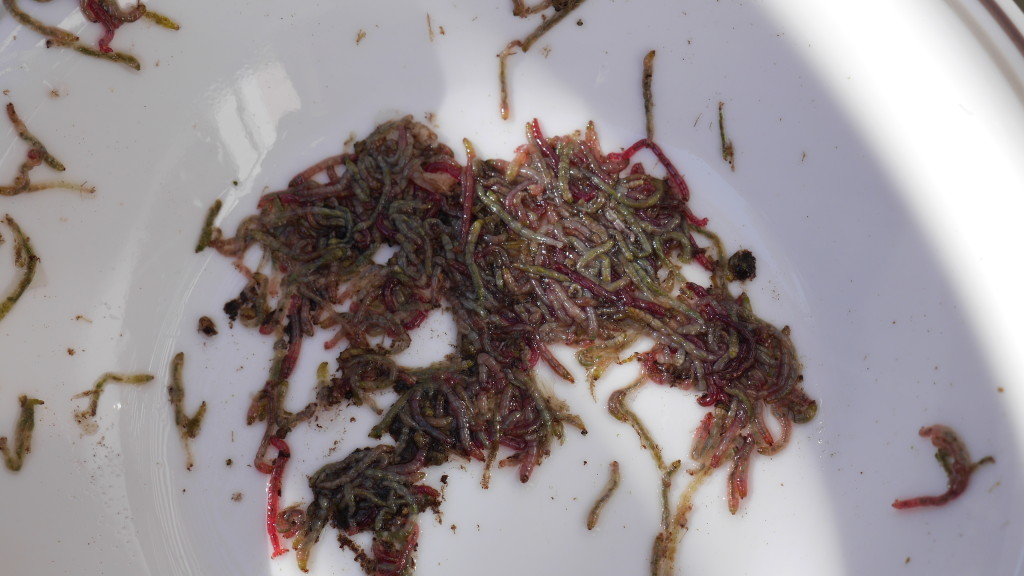 inch Striper but they did pretty much hit a Crease Fly at will if you led them just right.  I think its the nature of a Striper to hit a shad at anytime the opportunity exists being that it is more substantial than a bunch of worms.   I had a clouser on an intermediate line striped out and ready but they didn’t seem to want a fast fly when they were eating bugs.  They certainly took there time looking at the floating popper before eating it.  They would line up behind it and give it a good look and maybe a nip or two before going in for the kill.   The topwater Crease Fly action, though sporadic, was too much fun to quit.  I did manage to throw and assortment of flies at the shore fish.  I threw a white gurgler,  small shrimp colored clousers, and big deep water clousers at the rising fish with less luck than the crease fly.  All the time chasing those fish,  the fish finder was going off on deeper fish as well.    The Crease fly was the best choice and I managed some fish out of every school I chased.   By 9:00 am, the schools went down and I couldn’t get them to touch a deep closer.  I left at 10:00am  catching a dozen fish to 24 inches.

More weirdness on the way home.  I got another flat tire on the boat trailer.  Same side on the spare I placed.    Im going to replace that side with a new tire this week to match the new tire on the other side. I guess all those old tires are failing at once–like teeth.The good news is that Im getting faster at changing tires on the trailer.

My Son called me today excited because of a glitch he discovered on the United Airlines Ticket site earlier this afternoon.  For the second time this year the site went bezerk  posting five dollar tickets to anywhere.   Of course Mark (my son) jumped on it  and bought a round trip ticket to New York First Class for Thanksgiving,  two roundtrip tickets to Maui first class for Phoebes Birthday and a round trip flight to Seattle just to hang out.  Who knows if they will honor them BUT when this happened on September 13th of this year, United Airlines honored all the mispriced ticket purchases!   If they don’t honor these tickets,  they are going to look pretty unfair and it will be a PR disaster. Besides, large companies pay programers to find such glitches.