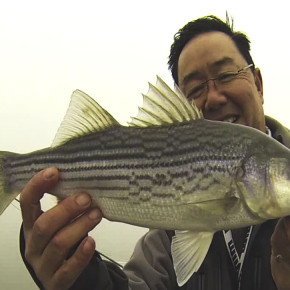 I was contemplating fishing the lake or the forebay before the weekend when I received an email from Ken Oda that he was planning on fishing  on Sunday.  Last year we had a stellar day on the Forebay when we met up by accident at the boat launch.  Ken works for the Department of Fish and Game and is currently researching the  Surf Perch population of the northern California Coast.   We have fished together many times,  for tarpon, redfish and trout on several occasions.  I decided to wait for the reports form the lake before deciding where to fish on Sunday.  Steph, Dave and Dan Blanton reported tough fishing on the main lake .  Even inside the trash racks was not producing on Saturday.

I met Ken at the Forebay Boat ramp at 8:30 and the fog was low and cold.   Like last week,  the fog and cold stayed for the entire day even though some of the Central Valley was having record high temps in the high 70s.   I wanted to take advantage of Kens knowledge of the Flats.    We started out at the wall across from Mederious and caught a handfull of  fish along the wall.   Occasionally we saw a single fish bust the surface but no big schools on top.   Eventually we started exploring the flats in 5-6 feet of water and picked up fish pretty steadily all day fishing type 3 heads and T-11s.   We caught a few around the islands and in the channel as well.   As January fishing days go, It was very good.   We ended the day with over 25 fish between the two of us.  I lost a big fish on the flats and I witnessed a float tuber with a very good fish also that was lost.   There were many soft bites and light hookups all day.   I changed flies all day and found that smaller flies seemed to hook more fish.  Ken did well on a three inch chartruese clouser sparsely tied with some flash.   The average fish we hooked was 17 inches with only one keeper.  It would have been cool to have landed that big fish but the odds were not in my favor, having hooked many fish very lightly all day.    We never saw the fish but it took line out like a double digit fish.   The water temp was 50 degrees and there was not a hint of current and very little wind.  I can’t figure our the pumping logic which creates most of the current in the forebay.  I think its an important part of when to fish it.    There were 15 boats and 6 float tubes and kayaks fly fishing around Mederious.   It amazes me that the fishing can be so different in the lake than in the forebay.    The action was pretty steady all day and we finally pulled out of the lake at 5pm which I found out is the latest you can be out and get re banded,   Ken Oda is fishing machine.   By 4:00, I was loosing grip on my double hauls, and could feel some tennis elbow in my stripping arm, but not Ken.   A couple Advil for me marks a perfect ending to a fun day.