Northern California is is on the verge of the biggest water deficit in it’s history.  There has been no rain in January and it looks bad for fishing next year.  With that in mind,  I met up with Dave Bearden and fished the Oneil Forebay today.   It was a beautiful fog free summer like day on the forebay.  The weather was spectacular and the water temp was 54 degrees.   The forebay was down two feet from last week and it was actually very warm- a balmy 70 degrees.   Unfortunately, the fishing in the fog and cold last week was much better than today.  We fished the flats that were so productive last week with nothing but a large fish scale on a the point of a clouser to show.   We actually nicked several large carp on that flat. . At the end of the day,  we only had caught three fish between the two  of us  with one about 19 inches.  On the flip side, The Delta seems to be getting more fishable.   I ran into Vaughn and Larry  on the Forebay, and  they also had only a couple fish. 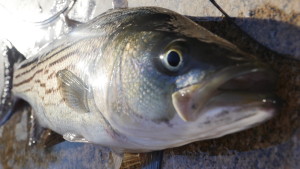 Using the Iphone App “Real Tides“,  I noticed that my best fish of last year in the Delta were caught on the bottom of the outgoing tides.  An interesting post made by Dan Blanton on his BBS