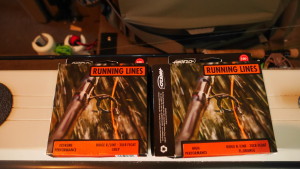 Last year I was a big fan of Monofilament running lines.  The majority of my rods are rigged with t-14 and t-11 shooting heads with OPST Lazar running line.   It does cast with very little friction and there is very little stretch but there is only one downside.  The line is so slick that its hard to strip and set on fish.  When stripping flies all day long and setting on heavy fish,  the line can act a bit squirrely,  I find if hard to control when getting a good fish on the reel.  After a long day of fishing, its not unusual to have more line cuts on the stripping and casting hands if many fish were caught. .   The Airflow Running lines both are easy to grip and yet they are very frictionless due to the tiny ridges engineered into the line running the length of the line.   Some fishermen complain that the ridges get dirty quickly and that the ridges cut hands and fingers easier.  I have not found this to be the case yet but I plan to put them to the test this year.

They cast like a dream.  It was fairly easy to cast 118 feet with one false cast with both the 7wgt and the 8wgt setups.

Recently I heard about a couple great no stretch running lines made by Airflo– The Extreme Performance Ridge line and the High Performance Ridge line.   I tested the two this weekend and Im happy to say they cast almost as good as mono and they feel great.    I loaded a 7wgt and 8wgt to fish with tomorrow.

While the fishing is getting better with the weather,  I decided to move my Humingbird Fishfinder from the bow to the center so that I can setup my ILINK tracks from the back of the boat.   I mirrored the Humingbird to a front monitor in case I need to read the sonar from the front.    In anticipation of the Ulterra self deploying trolling motor that Im expecting to be shipped by the end of the month,   I will be able to take care of business from the back of the boat.  I think this setup will allow me to make better use of the IPilot Link features such as following depth contours or shorlines off of a chart. 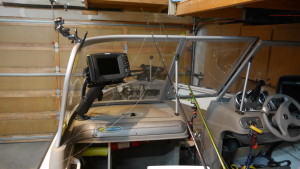 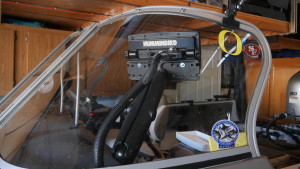