Citizen Mark Baldwin and I fished the delta today with or friend and idol Steve Santucci.  The weather was great today with a little wind in the afternoon but nothing we couldn’t handle.  We all got fish today and put 15 in the boat.  Mark caught most of them and a couple nice LMB.  Steve only fished for 5 minutes and caught 2.   Even though we didnt get any big fish today,  we had a great day catching up with Steve who is now in his 70s and still going strong.

We fished up the Moke today nearly half way to Sacramento launching from Orwood Resort at 7AM.  It was a colder ride than I remember  going 50mph  for about 45 minutes in the cold February morning air.   Both Mark and I have fished in Steves Yellowfin before and we thought we were layered up pretty good.  Both of us had to thaw out before fishing despite our multiple layers when we arrived.   The water was pretty clear and we fished the outgoing tide.   As February days go on the Delta,  I felt we did pretty well.

Everytime I fish with Steve,  I learn a little something.   Today we played around with rear weighted darting patterns  and different line  and leaders which I am now convinced makes a difference in the action of these flies. The test fly was one of Steve’s sexy 4/0 jig hook fishmask with synthetic hair and 40 grains of rear weighting 5 inches long.  The fly had completely different actions on three of the rods we tested it with.   There was much less darting with a t-14 and a 5 foot level 25lb leader.  There was a little more action with a t-11 and an 8 foot tapered leader (60 40 -20).  And finally there was a ridiculous amount of action with an intermediate (type III) with an 8 foot tapered leader.   It seems that the t-14 and t-11  lines sink and pull the slack out of the the jerked fly with stifles the darting action.  The intermediate seems to allow for more slack after the sharp retrieve and allows the fly to move almost a foot to the right and left. Steve believes that the 8 foot tapered leader and the intermediate head helps keep the line straight through the entire movement of the fly and also keep your line tight to the fly for the strike.   Much of the action on a “darting fly”  is lost if the line sinks faster than the fly. With the 40 grains of rear weighting on the fly,  I was able to fish to 20 feet with no problems with the immediate line.    I think this could be my new shallow water setup even on the lake from here on out. The line was a (6-21073)RIO In-Touch Freshwater Outbound Short – WF9I/S3 – Brown/Yellow.  It became more clear to me that there are many variables to the design of a good darting fly.  In paticular,  the amount of rear weighting ( from 15 grains on Dans Fly to 40 grains on Steve’s fly)   as it relates to the length/size of the fly hook  and the distance between the fish mask and the weight  (the length of the hook shank) .  Also,  Steve uses slotted lead squares and flattens them onto the shank which I think acts like a keel or rudder so shape of the lead might effect movement.   Ill tie some of each and try it next time Im out on the lake.

San Luis continues to put out BIG fish this winter with a couple 17 to 30+ fish caught by trollers and fly guys last week.  The weather looks bad for the remainder of the weekend so next weekend after the Pleasanton Fly Show. 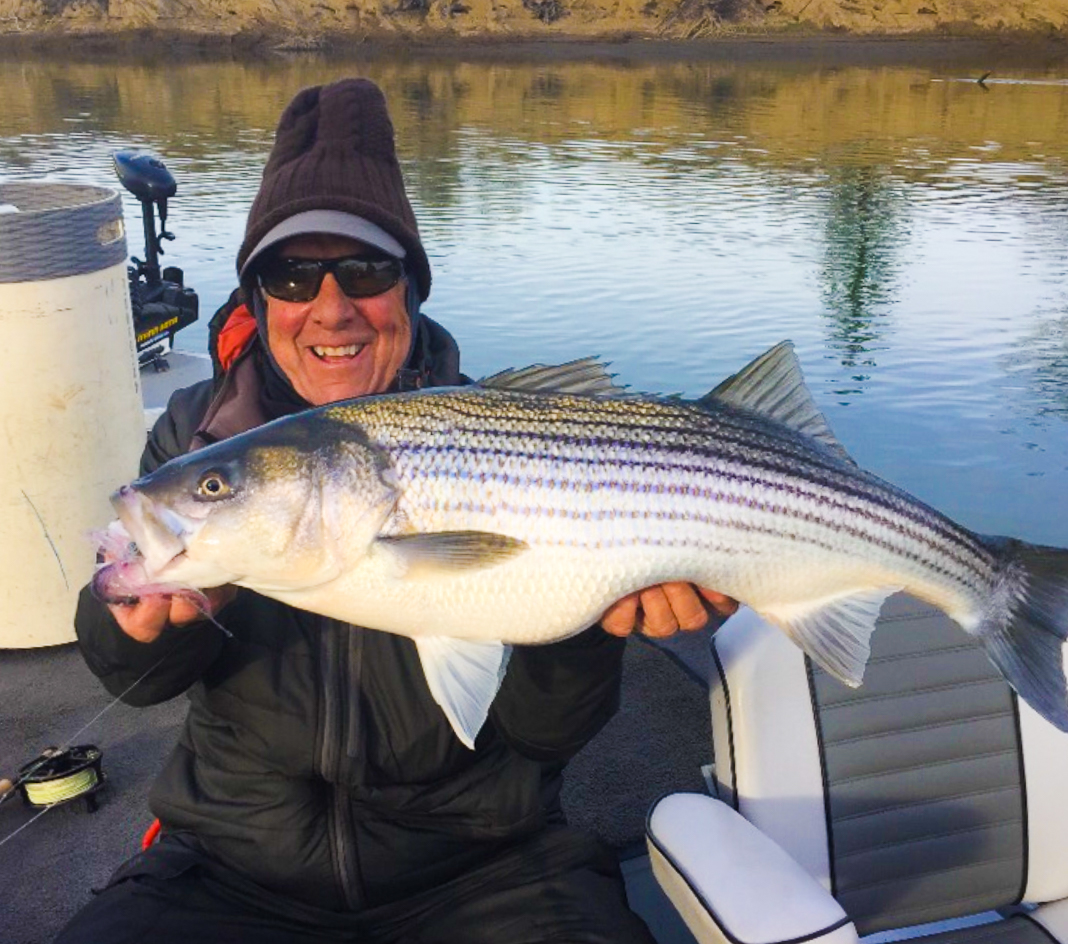