It was a wise decision to take the moms out for dinner the Saturday night before Mothers Day.  We had a nice dinner with the whole family at Kyoto Palace–the local “Benihana ” style restaurant where the chefs cook at the table and show off there knife and skillet skills.  My mom loves that place and every time I go there, I find myself shopping for cooktops like that for the backyard.  I thought  I might be fishing on Saturday, but the wind was too dangerous again. 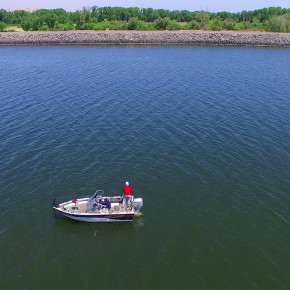 For the last six fishing days,  I’ve been getting up at 5am and calling the wind line at San Luis reservoir hoping for a lull  with no luck until this morning. The forecast predicted 3-5 mph winds for most of the morning building to 20 mph at around 3:00 pm.  But over the  last few weeks,  even though the forecast predicted low winds,  there have been high winds almost every morning for three weeks– I’m talking 15-39 mph winds every day..   So when I called this morning and got a wind average of 9 MPH,   I was off to the forebay at 5:30am.  When I got there however,  the flags were blowing straight out at the ranger station at Oneill Forenay.  I could see the whitecaps ripping down the dam, over the freeway and down the channel past the islands.  It was calm around the boat ramp.  The wind lady lies sometimes.  Im not sure where she measures the wind.   I deployed the Minnkota  Ulterra for the first time and ran into a glitch.  I had a screw that was too long that kept the motor from fulling deploying.  I fixed it on the lake and I love it.   The ability to deploy and stow the motor while starting the outboard definitely adds to my fishing time.   I carefully took the boat out to the islands through the white caps  and fished my favorite trenches that were hot in March.  The wind waves were so fierce, I could hardly stand in the boat and I put my life vest on just in case.   After fighting the wind for an hour without a hit,  I went over to the wind  shadowed part of the forebay and threw some hardware for bass.   I got one 12 inches and decided to try fly fishing again when the wind dropped to 12 mph in the slot.  The wind finally died down to under 10 mph around 11 am and I started catching some fish. 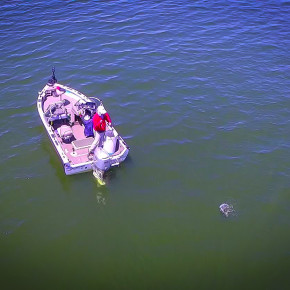 I caught a half a dozen drinks from the islands to the Medeiros Flats.  But I found some keepers in deeper water in the channel.    Finally, I fished against the rock wall and picked up a bunch of fish casting to the shoreline off the rocks.  At the end of the day,  I caught 24 fish of which 5 were barely keepers.    The majority of the fish were schooled up in the channel that runs parallel to the rock wall at Madeiros.   A dink accidently fell in my stripping basket today and I learned an important lesson. Don’t pour the fish out because it makes a unique kind of mess with your shooting line.  It took me half an hour to untangle it.  I guess we are in dink mode till October.  I miss those big fish of March…

I managed a pair of keepers today and prepared them for the moms for dinner.   The autopsy of the two stripers revealed that they were midging.  They were full of blood worms and midge pupa-like a trout!   I did notice today that the fish like  the pulse disks I was using.  Small pulse disks seem to work better that larger ones.   I think the vibrational frequency is higher and the fish like that sound better.    I stopped catching fish for awhile and when I checked my fly, the pulse disk was missing.  I didn’t have any little ones, so I placed a big one and it felt different on the strip. After taking some scissors to it and making it smaller,  I felt the high frequency pulse on the  strip and started getting fish again. Not a scientific test but it seems like the fish like higher vibration.  They were pretty selective about flies today. 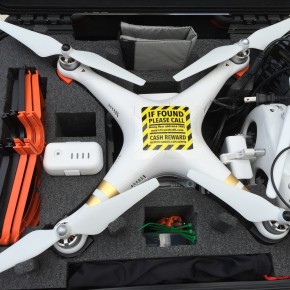 I launched the Phantom 3 off the boat today and it handled the wind great.  It uses a different type of GPS software that grabs more satellites.  Also the new ground positioning sensor allows it to hover over the boat at low altitude much more stable since it doesn’t rely on GPS but on cameras and sonar that sense the ground (boat) thus holding it at small altitudes very steady.   The  Quadcopter was easy to hover overhead and grab.   I modified the Phantom 2 hard case to accommodate the Phantom 3 and it stores nicely till needed in the bow. .   What I could use is some extra batteries for longer flight times.   Also,  I can’t wait to get some polorizing filters so I can see into the water better.   Polar Pro  is releasing some this month.

One thought on “Mothers Day on the Forebay”