This weekend I had the chance to fly fish for Shad on the Sacramento River with Orland Outfitters and Sea Level Flyfishing.  Ray Hutcherson’s group had a couple last minute cancelations so I jumped at the opportunity to fill in.  The last time I fished for Shad on the Sac was with Len Bearden many years ago.   We fished the same runs and I soon discovered that Shad fishing has evolved of the years.    May thru June are the months for Shad and I am usually busy with other things in May but that may change after this weekend.  Wayne and his guides put together a very good weekend on the river with great food and all the comforts of home right at rivers edge.  They really have the Shad Fishery down, and they know where to shuffle fishermen to the action.

Shad fishing has seen an increase in spey fishermen and I had a chance to practice my spey casting in moving water.  Moving water is missing in the Bay Area and nothing beats casting on a big river.  Its much different than the casting ponds.   The event started at noon on Friday and ended at 3:00 on Saturday..  Some fishermen slept overnight on the river.  Sometimes right before and after dark,  the Shad move into the shallows and roll like feeding tarpon.    Friday evening,  I fished out the boat with Wayne and landed seven in an hour.   It turned off at 8:00 sharp.  I had two double hookups as well.  The shad must have been thick in that run to actually hook two  fish at once twice.  It was a first for me.   Also, I learned that the leaders have changed,  especially with the Spey setups,   Shad don’t sit on the bottom and it is critical to fish from the middle up.  Type 2 and Type 3 sinking lines are the way to go with one handed rods.  With Spey, 10 feet of type 3 MOW tip was  the ticket.   The dropper fly on shad leaders  is now 4  feet up the leader in order to test for different depths when fishing. Tippet Rings work great for the dropper and  straight 15 lb test seems to work just as well as 2X.   And finally,  sometimes fluorescent beads above the fly on the leader attracts fish to the fly on the swing.    The group caught a lot of fish this weekend and approximately a third were small stripers.  I caught a 19 inch striper in one run that pulled pretty hard.  Harder than a Forebay Striper.  It must have been the current.

For next year, I need to fine tune my 7wgt  TCX spey rod with a Rio Skagit 550gr Versitip.  Both Wayne and Victor fished the Deathstar with that line and it was much better casting than my setup.   Also interesting was a new type of shooting line that Ken Oda uses made up of 8 chamber hollow mono–Varivas shooting line..   I also picked up one of Ray’s short belt worn stripping baskets.  I love it and I think it will be perfect for deep wading in the surf or  for steelhead.. 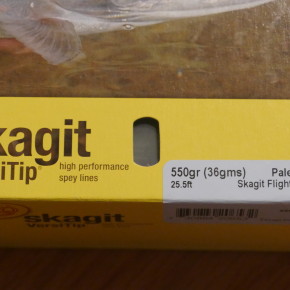 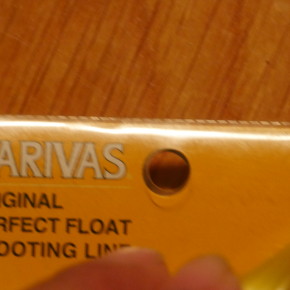 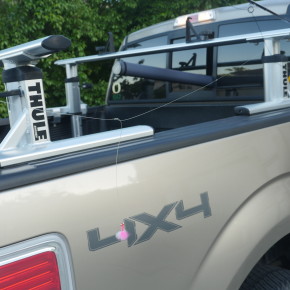