Its been a long time since I fished the forebay.  The last 3 weeks have been spent  recovering from eye surgery and I still have some blurry vision.   Also,  the winds have been brutal this June.    The last weekends were un fishable by boat on the weekends due to high winds.    In fact,  I didn’t think I was going to get out this weekend either.  Yesterday morning I called the Wind Line at 5AM and it was blowing 29 mph when the prediction said only 10.    I got on the Forebay boat Launch at 8AM and there was only a slight breeze at the dock even though the wind line was saying 10mph.   I headed out to the islands where we did well in March and metered a few fish.  No big schools all day long.  I located some schools of fish in the deeper water and managed to catch them after playing around with different retrieves.  Today they liked a very fast retrieve — faster than I normally strip.   My Apple watch went bezerk with the stripping thinking that I worked out all day!  I think there is an app somewhere in that, that would pace your strips or record what works for playback later.   Yellow closers with a size 2 pulse disk were the main course today.  I really like the way the fly feels when I strip it.  Im using smaller discs these days and the 20 lb leader goes through it just fine if you cut it.   The pulse disk gives me feedback when I strip and I can often feel if the fly isn’t working right.  Experimenting with straight eye vs jig hooks behind the pulse disk, I can say they both seem to pulse equally.  I fished all day with the jig hook closers.     The weeds have almost reached the surface and I didn’t get a single fish in the shallow flats or the rock wall.  I cruised the flats looking for holes to fish and spotted several 20+ lb carp in the weeds.   It would be something to be able to hook those monsters.    15 feet and deeper was the ticket for the bigger stripers   I ended the day with about 20 fish with more than half of them keepers and the biggest ones over 22 inches.    The last couple Julys have fished well and I’m excited to get back out there and fish next weekend especially after  taking a month off.  The good news is that my tennis elbow has healed substantially.    The lake is pumping water out and there is a slight current in the Forebay which may be the reason the fishing was so good.   It seems that where the water dynamics of the forebay concentrate current  That is were the fish hang out. 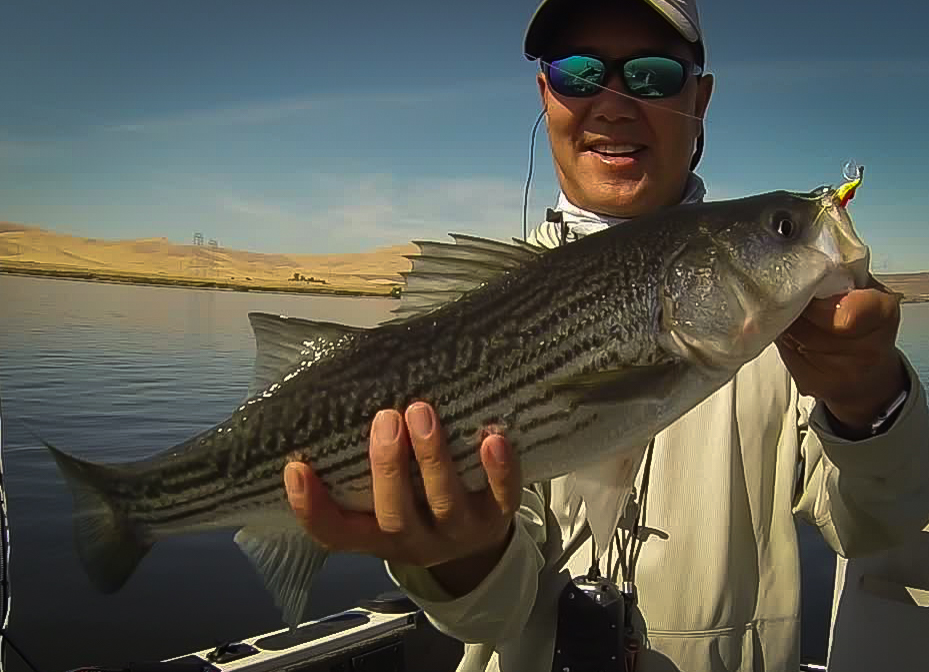 It amuses me when I tell my friends I try to fish every weekend and they say, “where is there water?”    I think the last place in California that will go dry is the O’neill Forebay as it sucks the water out of the delta, draws from the Main lake and sends it to Southern California down the canal.  The last drop of water from  the sierra lakes will probably pass through the forebay.  It still looks promising that this winter will be an El Nino winter.   I hope the fishing survives this drought.  Till then,  Im not emptying my live well till I get home.  I’m watering my plants with it.

2 thoughts on “Finally, a Calm Day on O’Neill Forebay”