I wasn’t expecting much today,  with the full moon last night, but the winds stayed down and the day turned out pretty good. I truly enjoy fishing with Steph and Vaughn and it is more fun when we are in different boats.   It’s difficult to fish hard when you  are steering the boat for a guest so that they can get a good cast off in the wind.  All good fishermen know that you sometimes sacrifice a little bit of advantage when you “guide”.  Today was three guys in boats, kickin back, looking for fish, and crowding the schools of fish and bait within conversation range.  Very fun. The fish were moving today. the game was to find them,  guess where they were heading and get in front of them.  Like last Monday,  I searched the weedlines for schools of fish. It appears that there is current from the reservoir pumping out. The channel between the island and shore concentrate the current and I think the bait along with the stripers hang out there.   The three of use each searched a different weed line till we found them and each school was good for a couple three fish.  But if you couldn’t stay on them,  it was tough.   Between the three of us,  we caught over 30 fish.  Most were dinks but we did manage a few pretty good fish.  Steph and I got a couple 22 inchers and we all could see some large schools of fish and bait on the meter.   In my opinion, getting the fly deeper where the bigger fish swim in the school is key to catching bigger fish. And, fishing the t-14 gets you down to the big ones faster than a type 3 . Keeping the fly in the zone is just a matter of stripping speed. 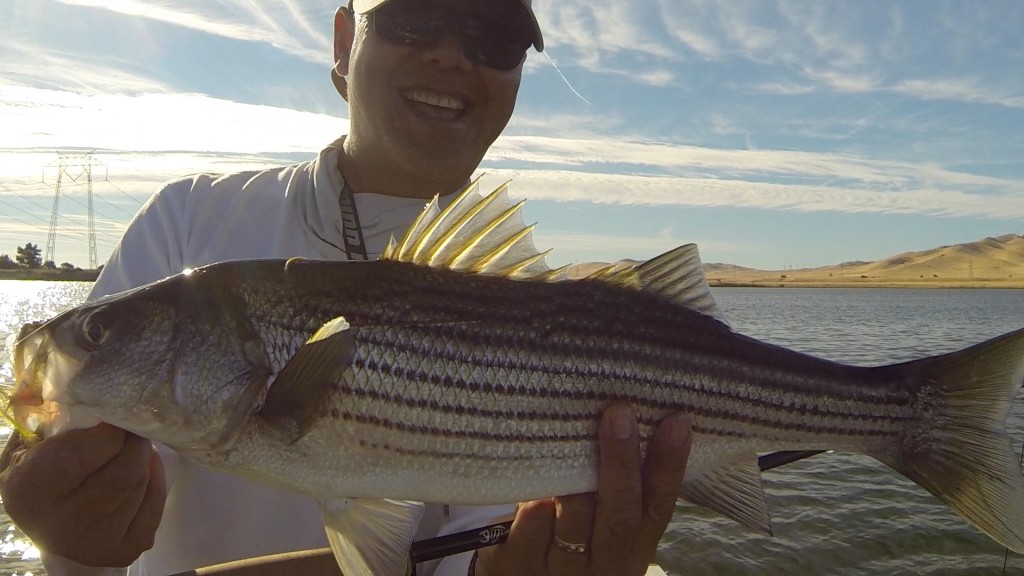 Again I used a rattled fly and a pulse disc.  I am pretty sure now that the pulse disc makes a difference in the forebay especially with the smaller flies.   I think the pulse disk makes the rattle louder and the fish key in on the sound in the murky green water.  Most of the fish I hooked today hit on the long pause after several sharp hard strips.   It felt like they heard the rattle and were looking around for the fly as if they needed to catch up with the fly. Fish today were often hitting a still fly.    The size 2 yellow rattled clouser with gold flash and a small rattle with a pulse disc is my go to fly these days on the forebay.

It’s interesting to note that the last three days, the solar tables were 4 star with morning bites despite the full moon all week. That doesn’t make sense to me since it seems the fish would be feeding all night and not be eating as much in the day. Oh well, you take your chances on the Forebay.  I rather think that the pumping schedule has more to do with it than anything.  When those pumps turn off and there is no current from any direction, the fish, even if they are there in large schools, get very tight lipped. Today, using the, the Lawrence Sonar, I put a fly in front of a fish below the boat and vertically jigged it in front of its face and it didn’t bite even though it swam up to it.

Vaughn told me that this years smallmouth bass fishing on the Delta was fantastic and its still happening.  Lots of topwater action all day long and many places to escape windy days and still catch lots of Smallies.   Next year I must try that.