In the midst of a major office remodel and the regular stresses of private practice,  I was eyeing the winds at San Luis all week long looking for an opportunity to fish the Trash Racks at San Luis again.    I had lunch with Jim Cramer last Wednesday and we decided to go fish together on Monday.    The winds looked best that day but by Friday, it also looked like the rain would end on Mothers Day and the winds might be low enough to scout the lake before taking Jim.   I got on the Lake by 8:30 and headed over to the racks.   The wind was brisk and the lake was white capping,  but the lights remained off and I was hoping it would stay at around 11 mph.  The fish seem to like the chop on the water and it keeps the traffic down.    By the time I slowly made my way to the trash racks,  the water looked perfect  and the 360 sonar was going off  The Dam Police were NOT in site and I was all alone.  I had  hoped that Dam babysitters had taken their mothers to brunch for the morning,

The fish were deep around the racks.  A good 30 second countdown was almost a sure thing.   By 9am I had 20 fish to the boat,  Many were chunky 24 inch fish that pulled so hard,  my rotator cuff was starting to act up. After a dozen fish on the small yellow and white craft fur clousers,  I switched to a giant fly hoping to hook a big one.    I threw it for about an hour and switched back to the small fly to catch  more fish.  Ken Oda hooked his big fish last week on a small fly  which  makes me wonder if catching those 20 plus stripers is just luck.    I do believe however that they take the same road and if you catch a big one in a certain spot,  that spot has higher probability for the next one.   I still have a lot of confidence in pulse disc which makes the fly sink erratically and triggers more bites on the pause than not having a pulse disc.     Around 10am,  Frank from Modesto, showed up at the racks with a friend and we caught fish together till we got booted from the racks at almost exactly noon.   Frank was fishing with Steve Santucci last week at the lake.   By noon I had 30 fish landed and was ready to go home .   The fish are still Super Healthy.  One fish jerked the rod out of my hand on the set.   I got lucky and didn’t let go of the line.  Hopefully tomorrow will be just as good for Jim.  Im going to concentrate on getting him on fish.  I have caught my share today and need to rest the arm a bit.

Yesterday, Steve Santucci nailed this PIG on a small fly #6 rear weighted fish mask. This 34 lb monster took all his backing out and he chased her with the trolling motor. 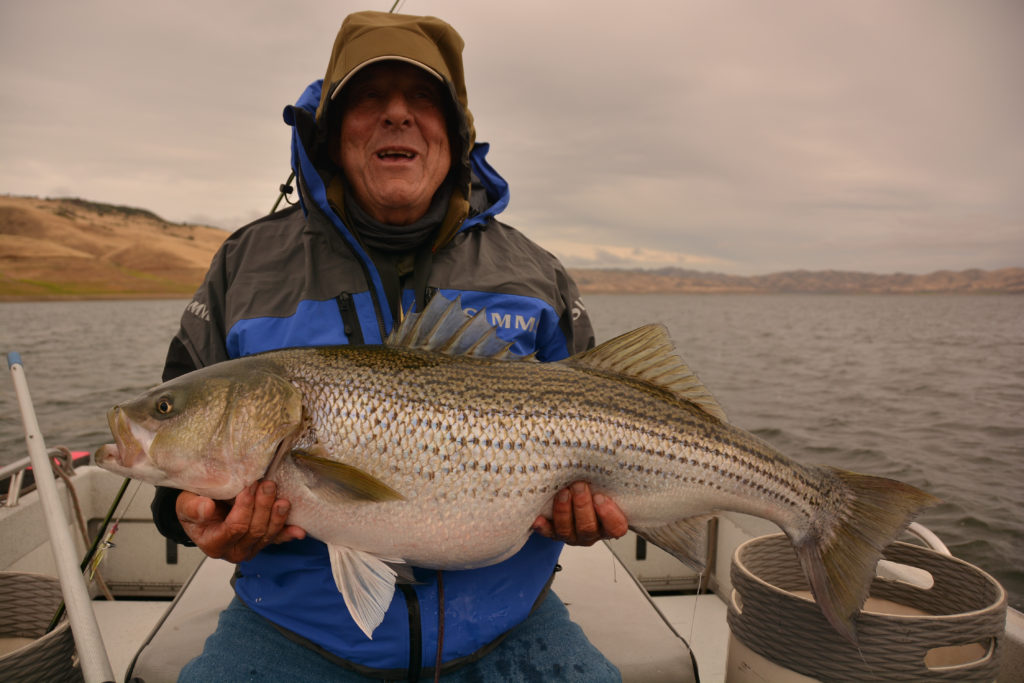 2 thoughts on “Mothers Day at the Trash Racks”