It’s great to catch al bunch of fish once in awhile.  I put numbers up today on the Forebay but I could not help wishing I were back at the trash racks in April when,  not only were the numbers there,  every fish was over 24 inches.  When I came home and thought about it,  If I had been fishing for trout and caught 30 fish from 12-17 inches,  I would have thought it was a great day and I have always believed that a 12 inch striper beats a 12 inch trout in a tug of war.   The fish in O’neill Forebay this time of year have always averaged small but they can sometimes get aggressive as heck.   Even with the full moon the night before, the fish were on the bite all day.  If I could find them,  they would eat.    Plus, the heavy weed lines and slight current from the pumps,  help concentrate the bait and thus, the fish in areas where they hold and ambush. The spawn is over,  and the new fish are growing.   The quantity of small fish in the Forebay is a testament to the future health of the fishery.  In July and August the fish are aggressive and there is tons of baitfish available especially along the weed lines.  This years weed growth is healthier than last year and perhaps the Water District is going to skip the stealthy chemical weed eradication that they pulled last year because of the public outcry.  The end result is better fishing in the Forebay .  Most of the big fish in the delta have moved up the river to cooler waters and the water in San Luis and the O’neill Forebay are warming up and drawing down.   The level of the forebay has dropped a bit even though it stays more constant than the lake,  and the water temps are slightly lower since it draws form the bottom of San Luis Reservoir.   I don’t understand the logic of drawing the lake down so rapidly but it is now even lower than last year during the peak of the drought.   The fish are feeding high in the water column in the mornings and dropping down to the bottom in the heat of the day.   Also the fish can be found in the flats at day break and they seem to move to the deep in the afternoon.    I managed to catch fish almost everywhere I tried but the most effective spots were along the weed lines in the dredged canals where there was a small amount of current. Some of the weed lines do not drop straight down but taper out from 12 to 20 feet deep with the bottom  so finding the depth the fish are cruising the underwater edge improves success.  In the morning, the fish are tighter to the weed line and as it heats up and sun rises the fish cruise up and down the weedline about 5-10 feet out.

If I fish the forebay again on Monday,  I think Ill try a 5 or 4 wgt Rod on those fish and think of trout as I land those worthy Striper Dinks.  I need to respect those smaller fish. Scaling tackle down tackle to the average size fish is worth keeping a couple lighter rods in the boat and keeps things interesting.

On another note,  the boat inspection police have switched there style of boat re entry tags.  I wonder why ;). They look serialized and more expensive than the last ones. It is just another example of government spending more money on a ridiculous policy that does nothing to keep quagga muscles out of the San Luis Waterway since nothing upstream from the Delta is inspected. 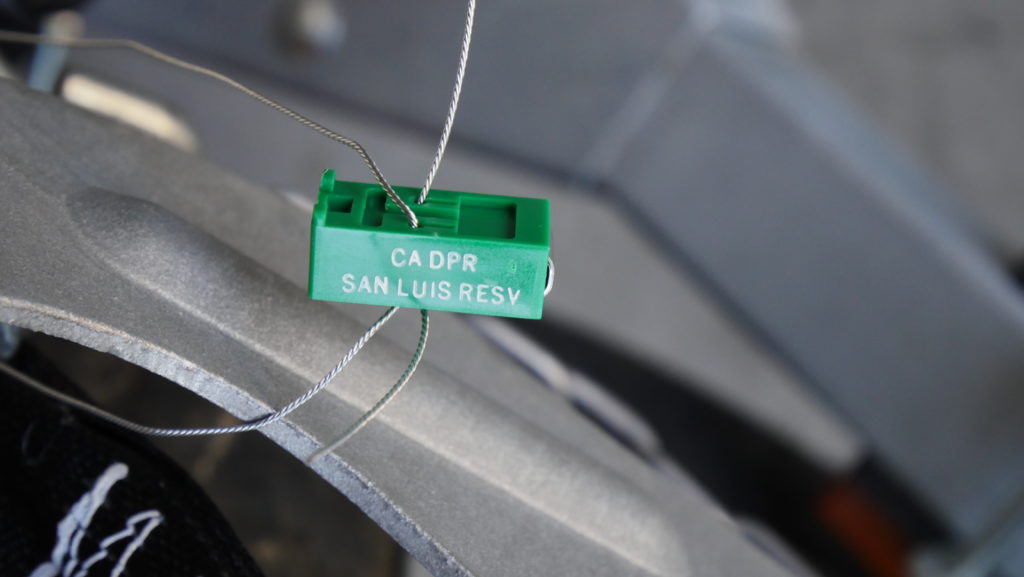 According to a Biologist at the Santa Clara Valley Water District (a patient), the rapid drawdown of San Luis this early in the year is complex. Even though we had a great rain year which filled northern Californian’s two biggest reservoirs for the first time in 5 years, the rains came in March which is when the salmon and smelt were migrating past the Pumps at Tracy that feed San Luis Reservoir. Biologists at the U.S. Fish and Wildlife Service and National Marine Fisheries Service told the state not to run the pumps at heavy rates. So San Luis reached 52 percent full by April 1, about half its historical average for that date. Shasta and Oroville are still at 89 and 87 percent today! Now that the migration of fish is over its peak, the biologist told me that they will begin shortly to fill San Luis in the next couple weeks by letting water out of Shasta. What they did not anticipate (which they should have) is that with San Luis drawn down to 10 percent, there is a massive algae bloom that has caused water officials to stop taking the smelly water from San Luis, last week, and start taking them from local reservoirs specifically Coyote and Anderson which are both about 50% full. Anderson and Coyote reservoirs are now CLOSED to boating.