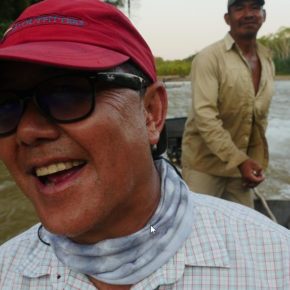 Deep in the remote jungle territory of the Isiboro Secure National Park (Tipnis) in Bolivia,  where the Andes meet the headwaters of the Amazon,  exists a species of fish unique to the Southern Hemisphere–an Apex Predator called the Golden Dorado (Salminus brasiliensis).  Small minnows and  baitfish called Sabalo migrate up the greater Secure system and following them are aggressively feeding dorado.  There are many places in South America where you can catch these magnificent fish, but no where but this river system can you catch aerial dorado in the 8 – 35 pound class in small freestone streams site fishing with fly rods consistently.  When I asked my good friend Steve Sakamaki, who has been to more exotic fishing destinations that anyone I know, where he wanted to go,  he told me that he wanted to return to Tsimane.   Also, John Leonard  who is the father in law of my cousin and long time fishing buddy,  also rated it as one of the best destinations he’s fished and like Steve,  he has fished almost every corner of the world.   Thanks to John’s experience who has fished Tismane twice, and  after a year of planning and fly tying, we boarded a plane and flew for 20 hours to the Tsimane Lodge in Bolivia  via Miami, La Paz, Santa Cruz and Charter. Fishing of this quality attracts world class flyfishermen like April Vokey and Steve Huff who both fished Pluma lodge in the last months.  It was a trip of a lifetime.

Tsimane is operated by Untamed Anglers.  Marcelo Perez, the CEO and Founder, had a vision to build a fishing lodge in a 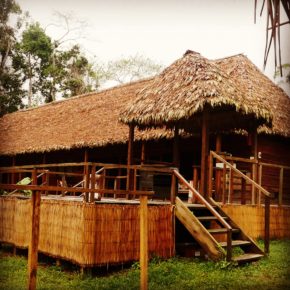 wildlife preserve.  What followed involved some intense and prolonged negotiations with the government and the local natives.   Eventually he was able to build three lodges on the Secure River area whose revenues greatly improved the lifestyle and quality of the native people.  According to Marcello,  it took month of negotiation with the government and the president of Boliva to make the project a success and sustainable. Macrello Perez who is also an architect built two lodges in the watershed , the Secure/Agua Negra combination trip and Pluma Lodge.  The main lodges for both programs feature cabins made from locally milled lumber, rooms with private bathrooms and hot showers, satellite telephone and internet as well as pretty good food.  anglers access the rivers by boat, and on some beats there are miles of trails to walk. Because of the partnership with our  trained Argentinian fly fishing guides, and  the native Indian hunters and boatsmen that accompanied us each day we learned how to hunt the hunters and catch world class Golden Dorado on Flies. 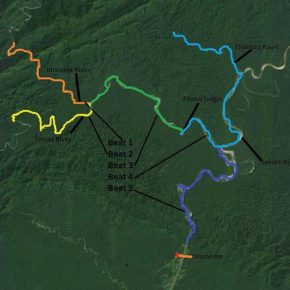 The key to planning a trip to Tismane,  in my opinion,  is to pick a time of the year when it  rains infrequently.  Trying to plan a trip  a year in advance involves some luck since fishing can be radically different week to week.    Tsimane is a very wet rain forest due to is proximity to the Andes. Rainstorms can raise the water in the river nearly 5 feet in hours.  Its such a common occurrence that the natives don’t even flinch when a wall of water comes down the river like a tidal wave. They navigate extremely high and low water levels like another day at the office. The unfortunate side is that it takes two days for the river to get clear enough to fish .  According to Chucky,  the head guide\host  and one of the nicest most skilled flyfishermen I’ve ever met,  the best time fish is before the rainy season.  The rainy season is usually September to October,  but over the last couple years its has been coming earlier.  August is the best month according to Chucky.   Each camp can accommodate up to 10 anglers. We were fortunate to have only 6 in our group giving us more water to fish.   The rivers around Pluma Lodge are divided into 5 beats and we rotate around them fishing each beat twice..  Our guides were Alejandro, Augusto and Sebastian – all hand picked Argentinian Dorado Guides. 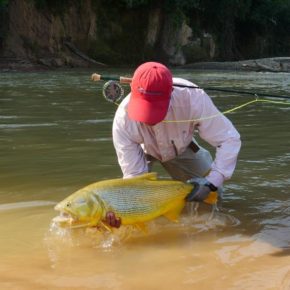 Fishing for Golden Dorado in rivers is  nothing like solely fishing for trout, steelhead, stripers or tarpon but has elements of each discipline.   The first day we arrived, we fished the hole in front of the lodge without a guide or experience.   I tied on a six inch Ardino Deceiver and started fishing it like a streamer for trout.   After no success,  I started fishing the fly like I do for stripers in the delta with hard fast strips.   After no fish or takes with that method,  I resorted to  swinging the fly like steelheading.      That afternoon,  I hooked three fish, had two looks and couldn’t land any using a combination of all three techniques.  By the end of the week, I found the most successful way to hook and land these unique fish was to cast behind every rock.  always start by fishing  the shorelines  since the fish during heat of the day or during low visibility muddy water tend to move right to the edges,  and  finally fish rolling water with three types of retrieves.  First swing flies dead for several casts,  then pulse them for several casts and  then strip them in as they swing which accelerates the fly. Golden Dorado are super fast predators and I witnessed first hand that the can hit a fly the second it hits the water and get it half way down their throats in the time it takes to strip  the slack out of your cast when the fly hits the water. Chucky taught me to prepare to strike the  second the fly hits the water. 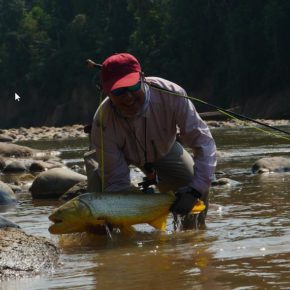 The key to planning a trip to Tsimane,  in my opinion,  is to pick a time of the year when it doesn’t rain frequently.  Trying to do this a year in advance is pure luck.  Tismane gets more rain than other areas due to its proximity to the Andes and over the last several years,  the rainy seasons have been very unpredictable.  The biologist at the camp told me sometimes it rains 300 inches a year.  The group leaving when we were arriving told us that they lost two days of fishing to rain and that they were leaving as the fishing started to get good.    It really takes two days for the river to drop and clear .   One day we were fishing a small tributary off of the Pluma river after a rainfall.  Fishing 100 yards from the confluence ,  we heard a roar and the main river behind us had 5 foot white water rollers.  Chucky was on the flooding river when the wall of water came down the valley. He told us a wall of fish were swimming ahead of the brown flood and they weren’t interested in eating.  Surfs up in Bolivia  about once every two weeks.    On our third day it rained hard and we had only a couple hours of fishing before heading back to the lodge to ride out the muddiness.  The next day you could cut the river with a knife.  On the fifth day I was still skeptical that we would catch fish with 1 inch of visibility but I figured I would fish as much as possible no matter what the odds.  The  fishing was pretty bad with 2 fish being the top rod that day.   The last two days got better and better as the water cleared. 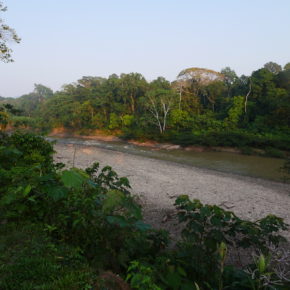 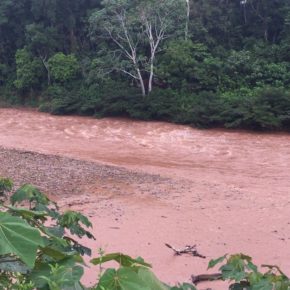 The group as a whole had about a 5 to 1 hook to land ratio all week.   On a fishable day with relatively clear water,  the average person caught 1-2 fish.   My best day was 7 and Steve caught three one day.  Dorado hold in the fastest white water part of the river and there are spots that produce day after day.   After a week of fishing,  and an education from the guides and Indians,  I learned that the fish move into the middle of the rivers for most of the mid day looking for 6-12 inch Sablo to get swept into the fast currents. It figures that the only place a 12 inch Sablo has a disadvantage is when its caught in the fastest water in the river.    In the heat of the day between 11-3,  If the water is really muddy,  the Dorado sometimes line up along the bank in shallow water.  One day Sebastion pointed to a fish 80 feet across the river sitting inches from the bank behind a rock in slack water.  It was evertthing I had to get a microsecond drift hitting the fish on the head, but after many attempts, one cast landed on the fish and it indeed hit the fly but I didnt hook it well and it released itself in the air.   Every Dorado jumps and the smaller ones jumped more.  If you hook a big fish and it doesnt jump,  its probably a Pacu.    We only had one day of clear water and it was the day I hooked over ten fish and landed 7.   If you are a quantity angler,  Ive been told by the natives that if you hit it right,  you can catch a dozen fish a day.  Chucky defines a “good” day as 6 fish with two over 20 lbs.

There is something magical about witnessing  the wake of a 20 lb Dorado  chasing and crushing a fly as its skips across the water on the swing  going 15 mph.   The official leader setup for Tasmania is a 5 ft (arms length) piece of 40 lb test attached to a 40lb wire trace tippet.  Chucky likes an Allbright Knot for this.    In the muddy water,  I figured that fish might key in on vibration and I used #7 pulse disk most of the week with success.   When the water is muddy,  the guides like bigger flies and in the clear, smaller ones.   When the water is clear, the Dorado will sometimes cruise very shallow flats and are  very spooky requiring long stealthy  casts and low profiles.    I found myself in a situation on the clear water day fishing for a large Dorado in 12 inches of water.   The Indian guide got low as the Dorado hunted the shallows for Sabalo.   Following his lead, I dropped to my knees and waited.  Sure enough the Dorado came close.    I made the cast on my knees in the water and landed a 15 lb Dorado with a 20 foot cast.    I believe that a small break down stripping basked could help me get 20 more feet on my cast  while wading in deep or shallow water moving water.   The 4/0 red yellow and purple andino deceivers were perfect for the conditions and the most productive casts were long casts.

I took lots of video and it will take at least a couple weeks to edit the movie,   It was pretty cool that Chucky had a Phantom 4 drone at the Lodge.  We had a great time flying together and he has some mad skills when it comes to aerial photography.  Chucky also  gave me some great tips on fishing Mantaveni Columbia.  He had fished it a month ago with great success and highly recommends this Peacock Bass destination.   We are booked for February.