I took my drone to Bolivia last week with no incidence only to find that the Head Guide had a Phantom 4 at the lodge.  Chucky (Vincent Lorente) turns out to be quite a skilled pilot and we some fun filming with two drones.   I left him my Polorizing filter for the drone–I cant wait to see what he does with it.   He taught me how to do 4 second moonlight night exposures with the Drone.     Filming in the jungle posed some unique problems.  I brought three cameras  – Lumix GX8 with a long lens shooting 4K at 60fps,   Two GoPros–A Hero 4 Black and a Session.   The Hero session was  my most used cameras because of its size.    I brought a mouth held 3 Axis stabilizer that I wore around my neck which worked out better than I expected.  The hero 4 was mounted on a small tripod and I would set it up on the bank.  The main problem with that is walking the bank and forgetting where you put it.  The best camera is one that you can aim and setup while fighting a fish if necessary,  that shoots 4k  and can be removed quickly and handheld or set on the ground stabalized.   I was amazed at the camera and video skills of the Tsimane natives and the Argentinian Guides,   No matter how sophisticated the camera,  they seem to know how it worked.  They took some great photos of me  and they don’t hesitate to pick up a camera or Gopro while you are fighting a fish and film you without asking them to .  Their familiarity with video and film technology is amazing.  I also brought a monopod  for the Lumix camera.  The longest lens I had was a 140mm and I thought it was a little short at times,  shooting from the boat.  Polarizing filters are a must.   I had no problems with the battery packs and chargers.  I was juiced up all day and very seldom had to charge a camera while shooting another from the backpack.  I used a Simms waterproof chest pack on my belt to store a couple flies and leader along with my GoPros but  seams on the bag started to open up.   I almost lost some gear from a leak in the bag.  Simms quality control isn’t what they claim.  Steve’s Simms Wading boots delaminated from the felt in the water and they were only a couple years old. 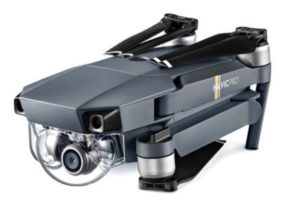 This last week there were some pretty outstanding new technology releases. DJi released the Mavic Drone which is basically a Phantom 4 that breaks down to the size of a quart water bottle with all the 4k and flying features of the high end drones.   I bought one and  cancelled my Lilly Preorder.   Gopro also released the Karma Drone and after researching them both,  GoPro is in trouble.  The DJI Mavic is mature technology and with the 4k camera built in, its also cheaper and smaller.   Its no contest,  DJI just blew the GoPro Karma and the Lilly out of the water.       Gopro also released there new line of Cameras.  the Hero 5 black and the Hero Sessions 5.  These cameras would have been perfect for Bolivia.  I cant wait to try them out as soon as they ship,  They seem to be the perfect cameras for fishing. Both cameras are waterproof without a case which is what I like about the Session.  Both cameras can shoot stills and start recording with voice commands which beats fiddling with wireless while you have a fish on.   The Hero 5 Session  (the cube) now shoots 4K and has the same form factor as the old Session which allows me to now shoot 4k with a really small gimble.   In addition to all that,  both GoPro5 cameras have new built in Digital Stabilization algorithms which for a wearable camera is huge. 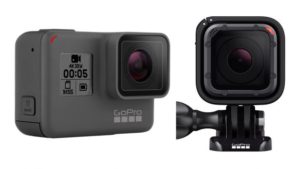 There is so much more to film in Bolivia.   I didn’t get that drone shot of a dorado taking a fly or crashing Sablo.    I didn’t get a  drone shot of a Pacu or Giant Catfish.    I didn’t get that crystal clear water experience and no great underwater shots.       All are reasons to return.  In the last couple months  Several film crews have made movies here recently..   Beattie Films  made a great film that is entered into the  Drake Film Festival this year.  Also, April Vokey was here last week with a Canadian film crew fishing with two handed rods for Dorado.   Her film is due out soon as well.    Its a beautiful place to film and I long to return.

Chris Eckley Sight fishes a big one on the upper skinny water section.  Now that’s how its done!.. 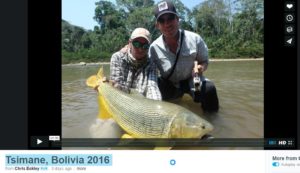 Untamed Angling Films –  At dinner with Marcelo Perez,  he told me he was an amateur film maker.   I don’t think so…