The Cubs Finally made it to the World Series and Monkeys have not flown out of my Butt. The good old Cubs are not losers anymore and they dont SUCK!  After moving back to the land of the Giants  over 30 years ago, I still remember those winless bleacher seat games in lightless Wrigley back in early 80s as the best baseball seasons of my life. There is something pure about Cubs Baseball that transcends all other sports. The city of Chicago is one big party tonight. No city celebrates its sports victories quite like Chicago. Congrats to the Cubs at last. I must confess that Gina and I were secretly routing for the Cubs even when it looked like the Giants would force a Game 5 in what looked like a sure win in the 8th inning with a rested Johnny Cueto and a fresh Madison Bumgarner waiting in the wing for game 5. We were at the last three Giants World Series but none of those games will compare with a Cubs World Series Victory.

Last nights Cal Oregon game was a comedy of errors on both sides but records were set. Cal beat Oregon for the first time in 7 years and the Oregon Ducks have reached ROCK BOTTOM with no conference wins this season and a freshman quarterback who cried when he lost. Oh well, its time to rebuild.

I cant wait for the Warriors to start winning again. Tuesday is the opener and I need looser relief. At least I’m getting stress relief from CBD oil. CBD has been proven to relieve stress and help athletes recover. Check it out today!

The Cubs didn’t pitch a No Hitter today, but I did on the lake. After casting for 9 hours, I didn’t get a single hit all day. I was all up inside the trash racks working every depth but I couldn’t get a single fish to hit. I was fishing the trash racks with a couple flyfisherman in float tubes for hours before the dam police kicked us for awhile but I didn’t see any fly fishermen with fish on. This is the time of year when many big fish.   A couple minnow fishermen I talked to told me the minnow bite great on the lake  last week.  Last week I caught over 20 fish on the Forebay.  All I fished for today was a big fish using larger flies,  30lb leaders and a 9 wgt going for quality over quantity.   There were over 20 boats on the lake today with perfect weather.  The solonar charts were at a monthly low but then I thought there might be one fish in the lake that doesn’t swim with that crowd. I kept thinking of Steve Santucci’s advice to me last year– “most guy just give up too early…” so I stayed out till the last minute.  Steve told me that the Fish Sniffer reported good topwater today but I didnt see a single fish on top anywhere on the lake.  . 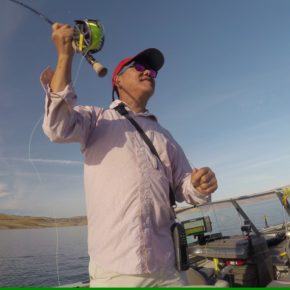 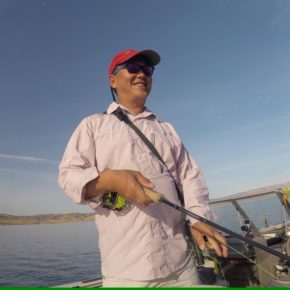 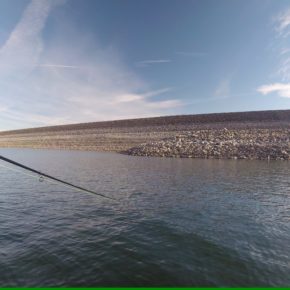 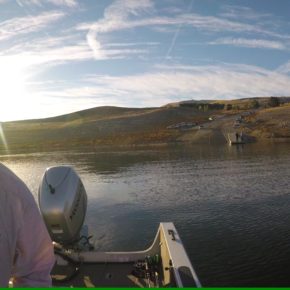