I caught my personal best striper out of San Luis Reservoir today–a 43 inch 32 pounder.   I am thrilled to have finally broken the 30 lb barrier but it is bittersweet because all my attempts to revive the monster failed today and the fish died.  A 32 lb striper is over 10 years old.   This striper was born when my kids were in middle school, survived the great drought but didn’t survive me this morning.

Gina took off early this morning to visit family in New Jersey at 4:00 am.   I got up with her to get her to the airport and decided to head over the lake early to fish the sunrise.   Vaughn had his best day on the lake yesterday and the wind forecast was perfect.  It was almost too still today.  Vaughn suggested the BOP where he landed so many fish yesterday that his thumbs were raw -his best day on the lake this year.  I got to the lake at 6:30 and the sky was this great shade of orange and blue. 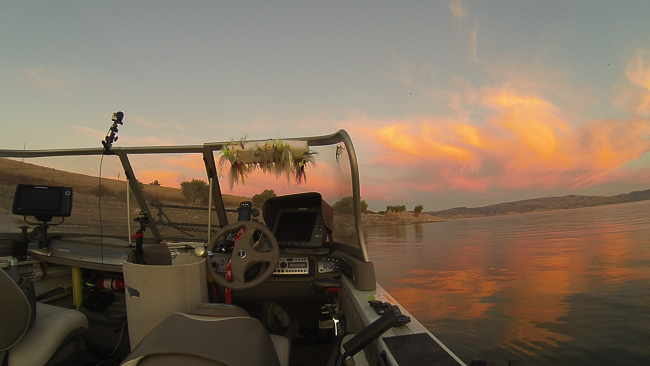 I started out fishing in 10 feet of water against the shore.   There were schools of Shad all around me and I picked up a 5 wgt shad rod with an indicator and two shad flies.  I couldn’t get the shad to eat like Ken Oda was able to do last week. I know the fish saw my flies but the indicator never moved.  There were plenty of smaller stripers to be caught right up against the bank.   I was into the dinks double digit and still I had not caught any keepers.  After the 20th one,  I decided to concentrate on deeper water with bigger flies.    The dam police were on the dam early and stayed till I left at 1:00pm.

I was casting a 1/0 flashtail clouser on a t-14 head when the big one hit.   I was fishing a drop off from 20 feet of water to 40. letting my fly sink over the edge and stripping it along the ridge.   I was marking rockpiles and brush  with no schools of fish visible on sonar.   The fly just stopped on the retrieve and I set .   Initially,  I thought I had snagged but the fish took off for deep water and by the pulse of the tail, I could tell is was bigger than anything I had every hooked.     It took a 250 foot run dragging me along.  I put the trolling motor on and chased the fished while it was on the reel till I was out in deeper water and then put the screws to the fish spiralling  the fish around the boat closer and closer till it came close,   I got my big plastic lipper out and as the fish got close to the boat, I realized that the fishes mouth was pretty closed shut.    I tried to pry its mouth open with lipper with one hand and the fish took off again pulling out about 80 feet.     I reeled it in hard again and this time the fish  came in on its  side.  As it reached the boat,  I pried the fishes mouth open with the fish lipper and clamped it.   The fish thrashed and my whole arm moved.  The fish nearly shook the clip and I reached for the fishes tail but it was too far away to reach.    What mayhem. I switched to the  big Boga which was easier to engage the big fish lips of the beast that were fatter than my fingers,   Like the Jaws movie I thought,  ‘Im going to need a bigger BOGA next time.  The fish weighed 32 lbs and was 43 inches long. (post mortem)

I pulled the fish onto my lap for the Hero Picture from the GoPros  and quickly  put it back in the water.   I estimated the fish had only been hooked about 5-10 minutes and I was pretty confident that the fish would survive. I put the fish in the water and it started to kick,   I let it go and it disappeared.   As I got up to hit save on the cameras,  I heard a big splash behind me,  turned around and saw the fish on its side swimming in a circle.   I immediately maneuvered the boat to grab the fish, hooked it back up with the Boga and  gently pulled it through the water heading for deeper water.  The area we were in was pretty thick with the green algae and I figured the fish might get more oxygen in the middle of the lake.   I could feel the fish getting stronger in my grip as I towed it  and when I let go of it the second time,  it continued to swim .   I stopped the boat and scanned the water.   A minute later, the fish was on top again and retried to resuscitate again.  The huge old fish just couldn’t stay upright in the water column.   I was bummed,     I tried one more time and called Vaughn while I was towing it hoping he might have another idea about resuscitating the fish.  Ken Oda,  fish and game biologist, told me that when the water temps get to about 70 degrees,  it gets tough to resuscitate big fish.  The fish could have had previous barotrauma as well.  I wonder what an injection of epinephrine would do to it.-like an epipen.?  Loosing this great fish sure put a cloud over the accomplishment for me and it weighed on me all the way home. 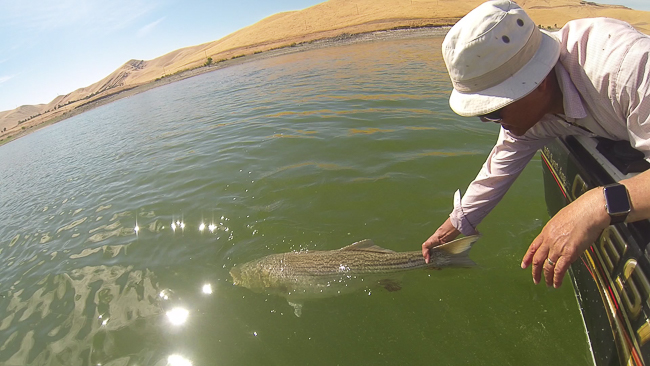 The attempt to revive the mighty fish took so long that my loop recording devices set for 5 minutes overwrote my hooking and playing of the fish.    I was also bumbed out that I didn’t have video of this personal best fish.    Im going to have to rethink how I tape bigger fish.  A couple weeks ago,  the same thing happened with an 18 pounder I caught with Ed Rea on the boat,    It took so long to resuscitate that fish that I lost the footage of me hooking and landing it. 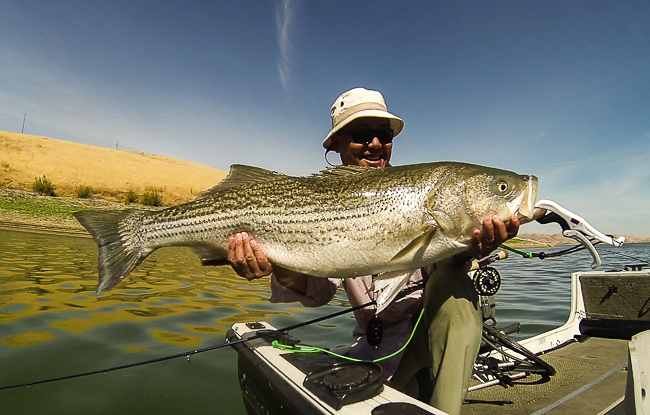 The fish wouldn’t fit in the livewell so I decided to call it a day.   I don’t think the day would have  got any better. The fish was dead so I took some pics of it with the drone    At  the cleaning station, I  did a surgical autopsy on it.   Organs were healthy and there were some small shad in its stomach.  No puncture marks other than my fly in the mouth.   As I cleaned the fish,  I could feel my dad smiling from heaven that I brought home the meat for once and I knew at least my mom would be thrilled with the striper filets,   I remembered when my dad would bring those huge 30+lb  ocean stripers back from  the party boats on San Pablo Bay back in the 60’s.   It was a long thoughtful ride back from the lake as I wondered about that 10 year old fish’s last day on earth  and how lucky my small fly must have passed right in front of its face for it to eat–fate for both of us..  I hoped it had a great sex life with lots of kids I would play with in the future.   It was an old fish and I like to think I put it out of its misery with assisted suicide. 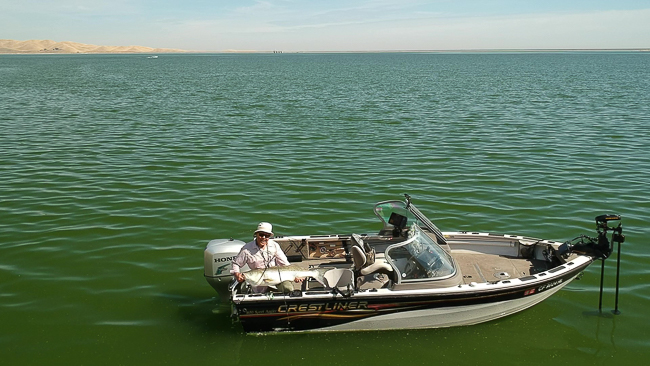