Thanks to my friends for the advice on saving the next 30 lbr should I be so lucky.   Ken Oda and Steve Santucci have caught and released lots of 30 plus pound stripers.  Both agree that if a striper doesnt revive with towing,  using a deep water release is the the next step.   Not alot of fishermen have caught fish over 30 lbs in San Luis.  I had landed and released a dozen fish over ten pounds this month and  I thought I had this huge fish under control until I knelt down to lip the over a yard long fish.   Its a whole new game with a fish over a yard long when it comes to landing without a net.   When a yard long Striper doesn’t want you to put a lip gripper in its mouth — you cant.    Ive worked on obstinate 10 year olds in the dental chair that were less tight lipped than a 30+ stripper.   I had to pry its mouth open  with two hands to get the lip gripper in plus the circumference of those lips was bigger than my 30 lb boga which at best just pinched the lip.   In the future,  I think all my future pictures of big fish will be partially lifting them  horizontally  out and over the water vs Boga weighing them.  A tape measure on the lip gripper might be handy since the length to weight chart seems right on,   but Im done weighing really big fish.    I agree that weighing really big fish hurts them.     So what is really big?  Its like asking what’s middle class income in America.   I think 15 lbs and above is the definition of really big (for me that is).  A 15 lbr is about  32 inches which is just about my maximum  reach to the tail with my right hand.

If resuscitation does not revive the beast,  then it time for this rig which I now keep in my boat at all times. 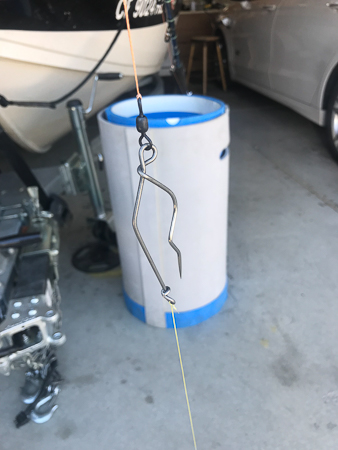 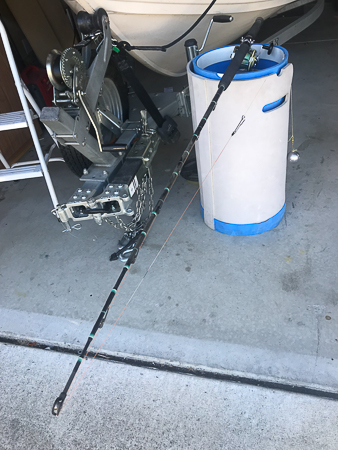 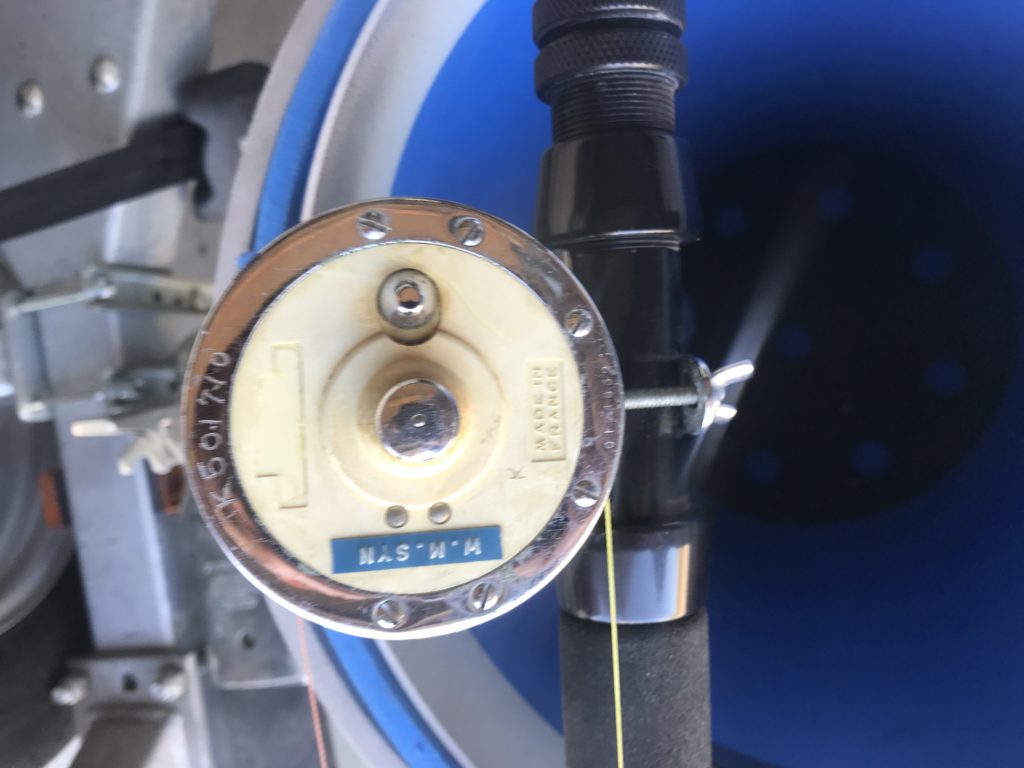 My late Dad used that reel in the 60’s to party boat fish stripers.  Its new use will be to save stripers with Barotrauma.    Here he is with a pair of nice ones from San Pablo Bay. 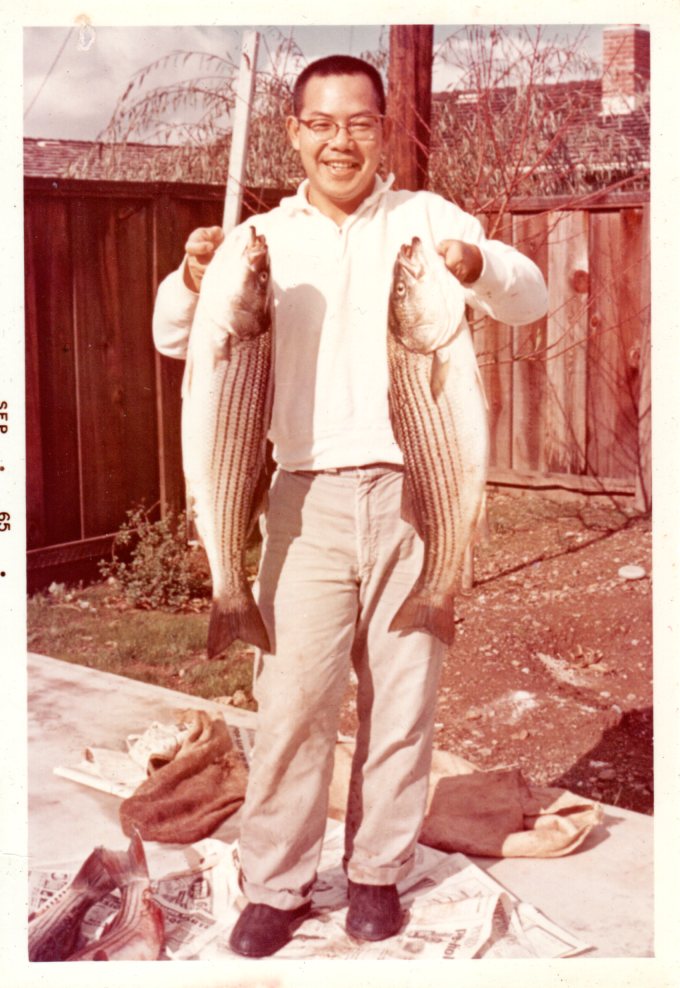 Putting a Boga on a 20 lb stripper is easier than putting one on a 30 lb striper.  I started using the Plastic Fish Grips  because I stopped weighing fish under 20 lbs to try to get them in the water quicker.   The lighter grips were easier to use and because they float (and are cheaper)  any accidents would not cost me over 100 bucks.  But after the difficulty getting both those devices in a 30 plus pound striper,  Ive elected to use the Aluminum Lippa4Life from here on out.

We designed the lippa4life to replace both a net and a Boga-grip. While we appreciate the benefits of nets in fast moving current or on a boat, we think they add unnecessary stress to fish when used in other situations. We know removing the protective mucus from fish decreases their survival rate and nets, even rubber ones, do remove the film. Similarly, while we like the Boga grip for its robust design and built in scale, we feel the potential for injuring fish using it outweighs the benefits. In order to activate the scale, one must lock the boga’s jaws onto a fish’s lip or jaw and hold them vertically. Not big deal if you are weighing the fish before you eat it, more problematic if you want to release the fish. When lifted from the water to be weighed, fish thrash and hurt their spine and jaw.

With our lippa4life we built in 1/8” gap on closed jaws so that they could not put hole in the fish. We also left off a scale function and made them like pliers so that an angler would not use them to lift a fish vertically but rather keep the fish held horizontally. This in-water release method of controlling fish horizontally was the goal of this product, and it is what all our instructions and marketing material has emphasized from day one.

The Lippa device feels easy to use and is a better dental instrument when it comes to insertion and engagement.   It not only fits better around the BIG LIPS of a 30 lbr,  the ball ends of the grip make it easier to push into the fish’s mouth when its shut tight.    It  is also easier to open and release with one hand when the fish is ready to leave than the other devices which lock  into place and  often need two hands to disengage. Also,  it rotates better because it doesn’t lock making  it easier to hold or drag a fish at a 90 degree angle to the fishes mouth without loosing its grip on the fish.  By design it does not puncture the lip and because of its circumference, leaves less pressure bruises on the fish’s lip.     I’ve had this Lippa in my misc gadgets box for years and I have only come to appreciate its design this last weekend. 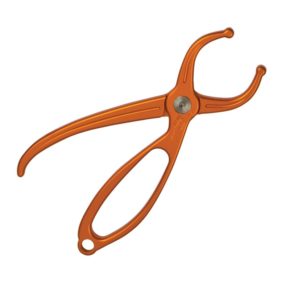 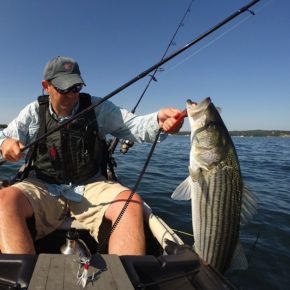