I love remote control stuff.  Minn Kota hasn’t been helping my waistline by adding remote control and deployment to its newest generation of trolling motors.  The way I access my controller has evolved over the last years.   I miss the hike to the front of the boat to pull and deploy the trolling motor, and I work my remote controller in my sleep like its part of the retrieve now, especially in wind.    Several years ago,  I almost lost a big striper  in San Luis when my mono shooting line got tangled up with the controller hanging around my neck on a screaming run.    After that episode, I started wearing the controller to the side with a camera strap.   That worked for a couple years and I think the only modification I made was buying a backup controller that was tiny  and wearing it on the side when my main one ran out of juice.  Nothing is more fun than landing a fish while the motor is running and loosing control  as the motor spins you around in a circle  because the remote just ran out of juice. 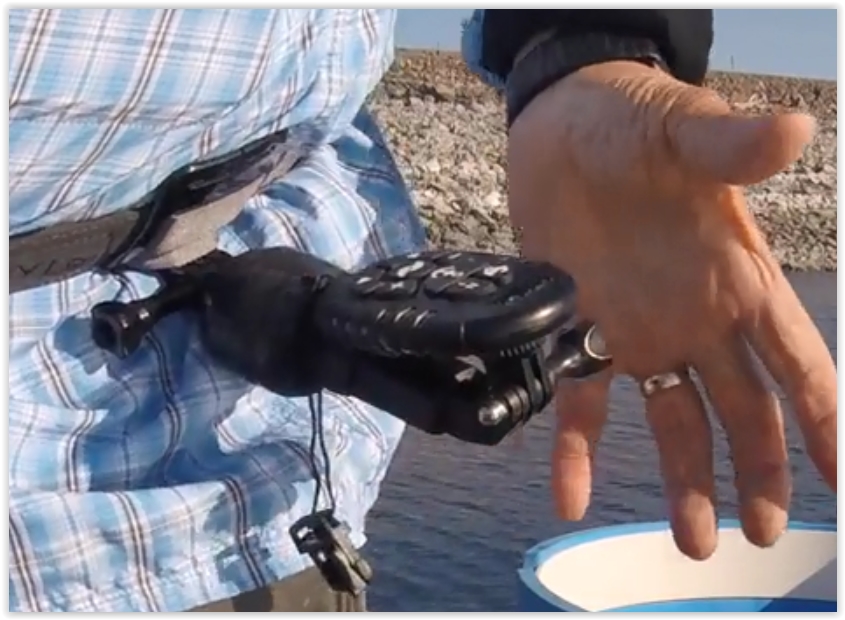 Dan Blanton has a cool custom made tethered remote to his trolling motor that he wears on his hip.   I liked it because I think it had a joystick on it.   He  told me it was more responsive than a wireless remote with less lag.  I don’t notice the lag  with the MK but then I seldom use the tethered foot pedal to operate the motor.  A couple years ago, I took apart a foot pedal and was in the process of making a tethered joystick controller that I could  wear like Dan.  That whole process got me thinking about making the controller more reachable.   With the hanging controller,  I would have to spin it around in my hand while landing a fish to access the awkwardly placed steering and throttle buttons.

To keep the position of the controller constant,  I built a belt mount out of GoPro mount.  The mount  was originally designed for a strap or belt to hold a camera pointing out at a fixed position.  I wanted to mount my controller on a belt with the buttons facing up so that I could just drop my hand onto the controller and the buttons were there without spinning the controller or positioning it in my hand to reach them with my thumb.    I don’t think the Minn Kota buttons are intuitively placed for the human hand.   The bigger remotes are even more awkward and  the new touch screen is prone to butt dialing.   I found myself accidentally stowing the motor in the middle of fighting a fish because my hand brushed across the screen while looking for the steering controls.  The belt idea worked for a couple months and then I decided to build it on a Gooseneck mount and attach it to a Scotty rod holder mount.  On my 2007 Crestliner,  I have Scotty Rod Mount holes every two feet around the boat in lew of a rail system that is found on newer boats.

The Gooseneck mount I use  consists of a two prong (vs three)  GoPro tripod mount  glued to the back of the controller with Epoxy weld,  an extension arm kit for the GoPro , and an arm attached to a Scotty Rod Mount Attachment.   There are all sorts of arms that I have played with that are designed for rail mounted transducers or cameras that can be modified to  work .   Virtually any pole that works with a GoPro can be used if you attach the  controller  to the rail of the boat.    I like the gooseneck because I can grab it from the helm and pull it down towards me to stow the motor,  or I can move it quickly out of the way  when I land a fish.

I have so much radio frequencies bouncing around my boat between three fish finders and sonars,  Drone Controls,  Bluetooth headsets, ipads and iphones that its no wonder that my bluetooth controller flakes once in a while.   The other day, I noticed that Nate’s new Crestliner had the trolling motor pedal in the back.   Great idea Nate.   I like fishing from the back  of the boat keeping  my backcast over the water.  I feel more in control from that position and my stuff is easily accessed , I’m close to the food and drink and I can start up the outboard if I need to make a hasty retreat to the 500 ft line (wink). 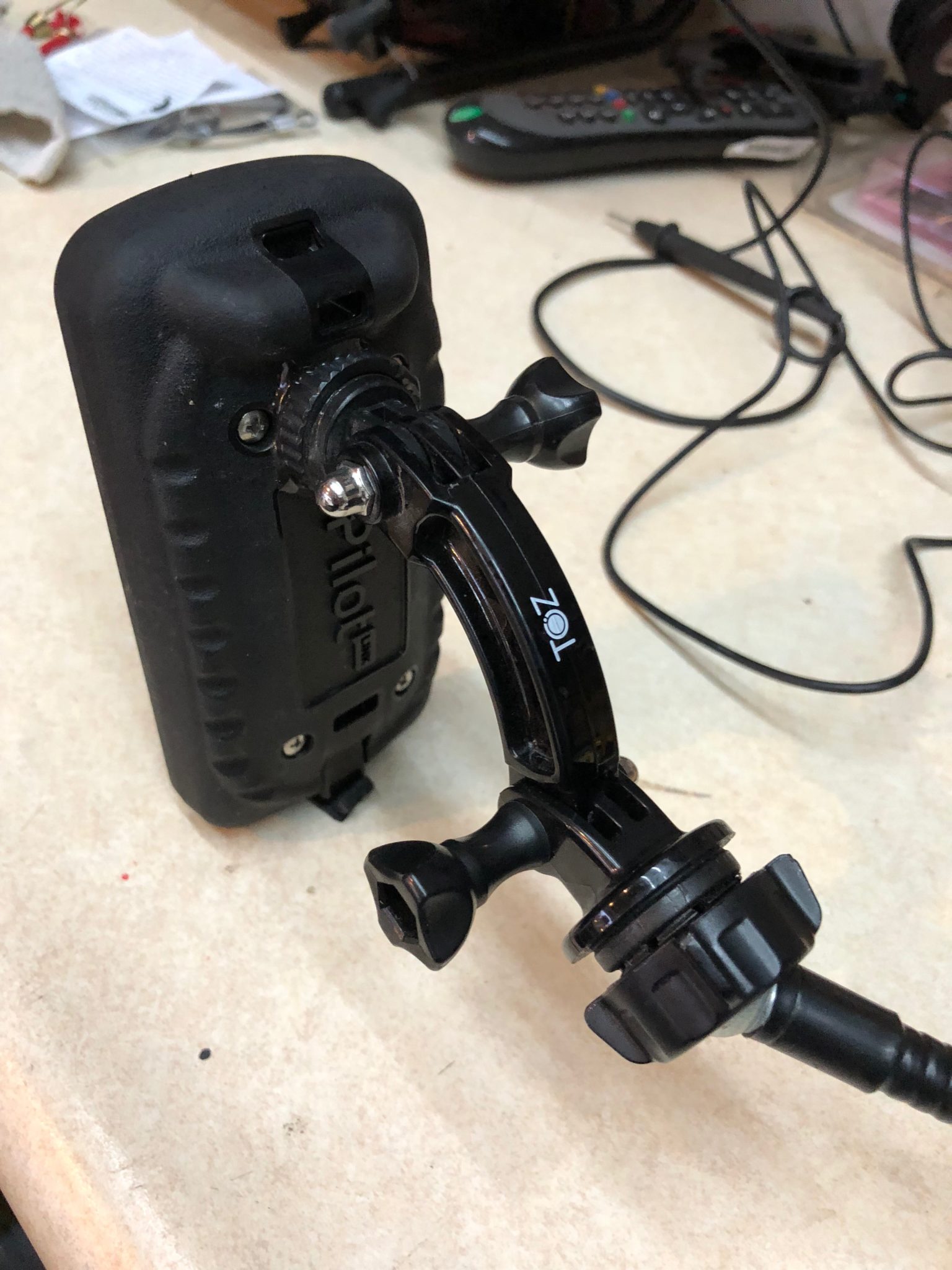 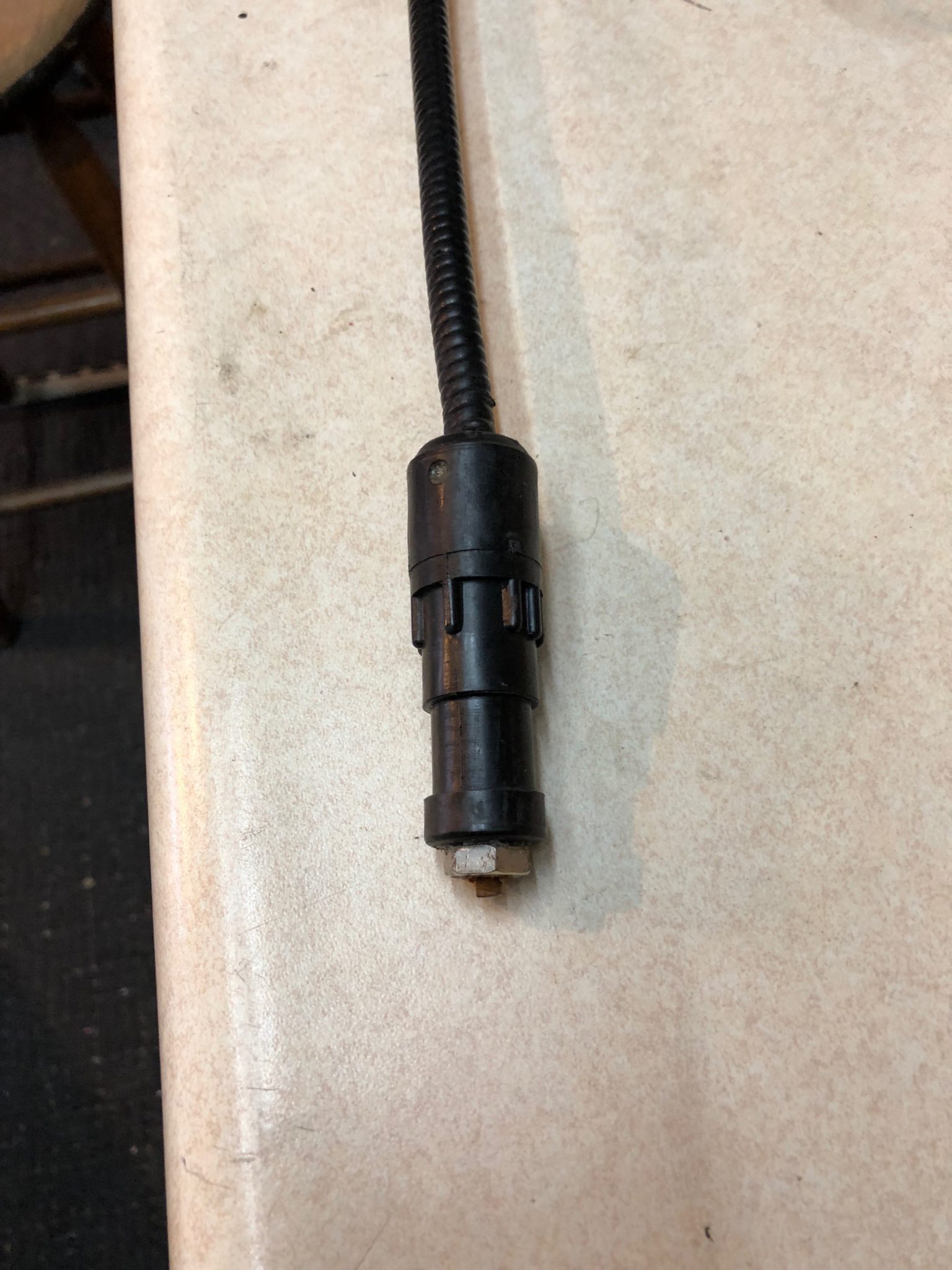 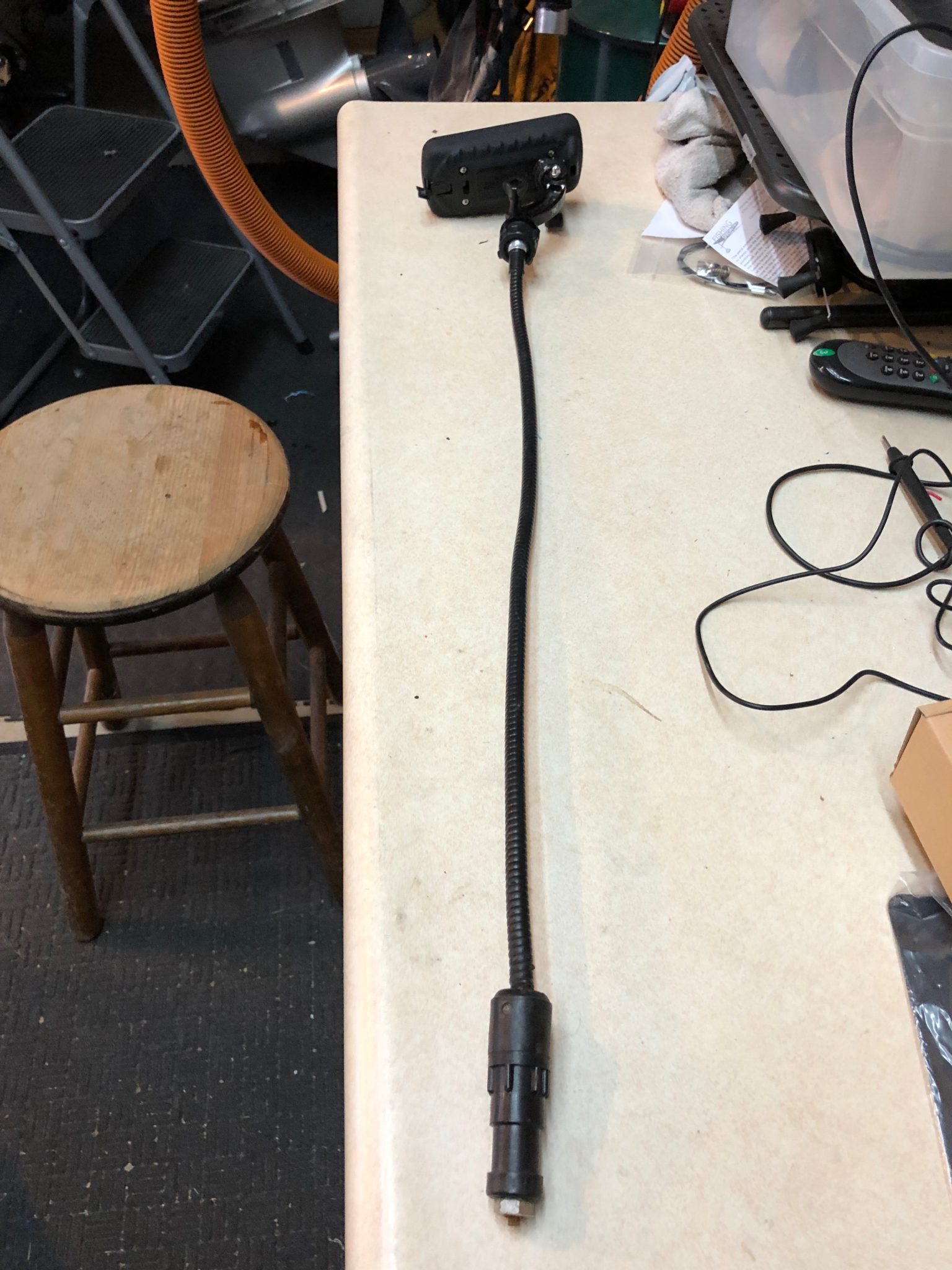 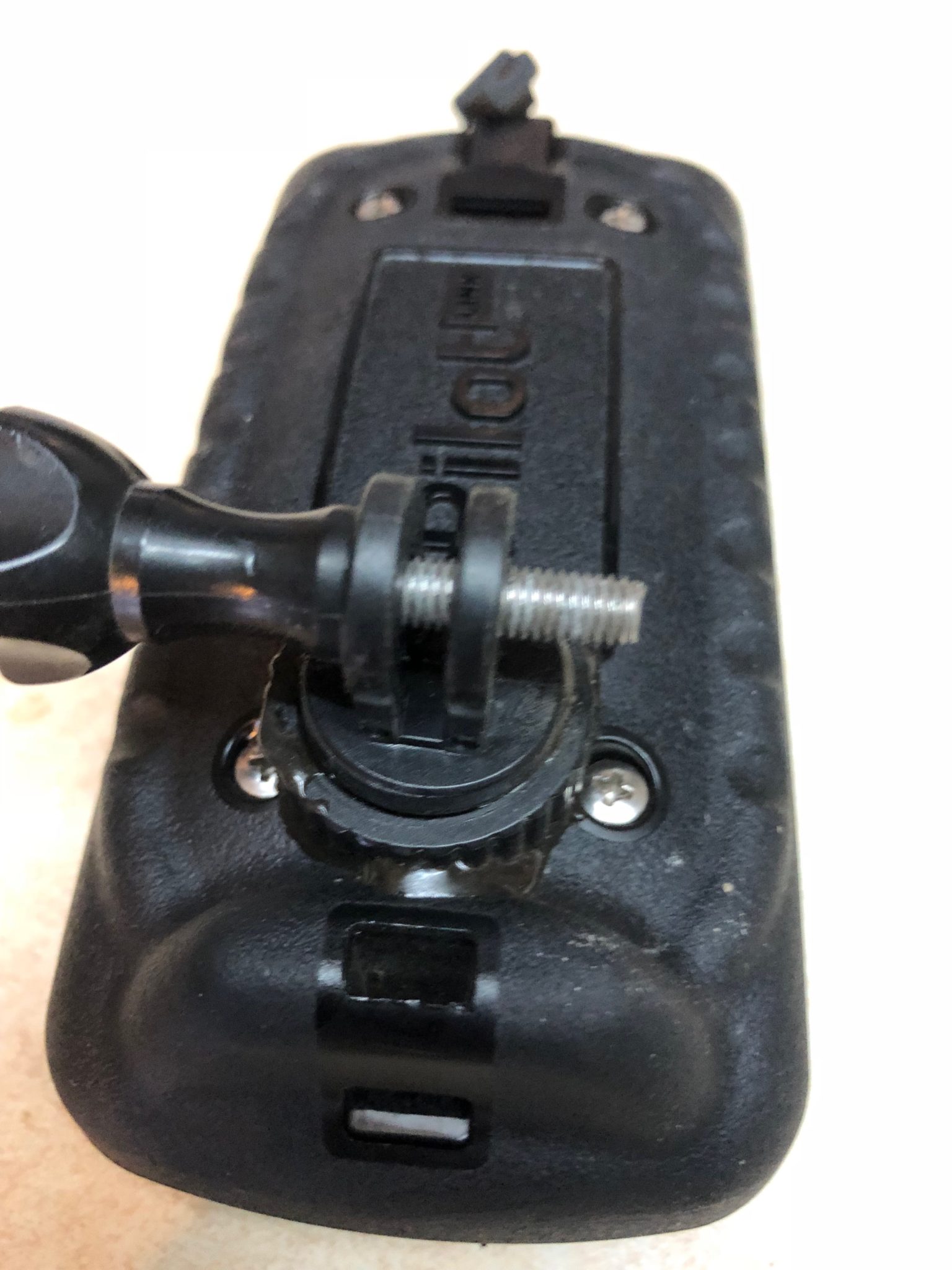 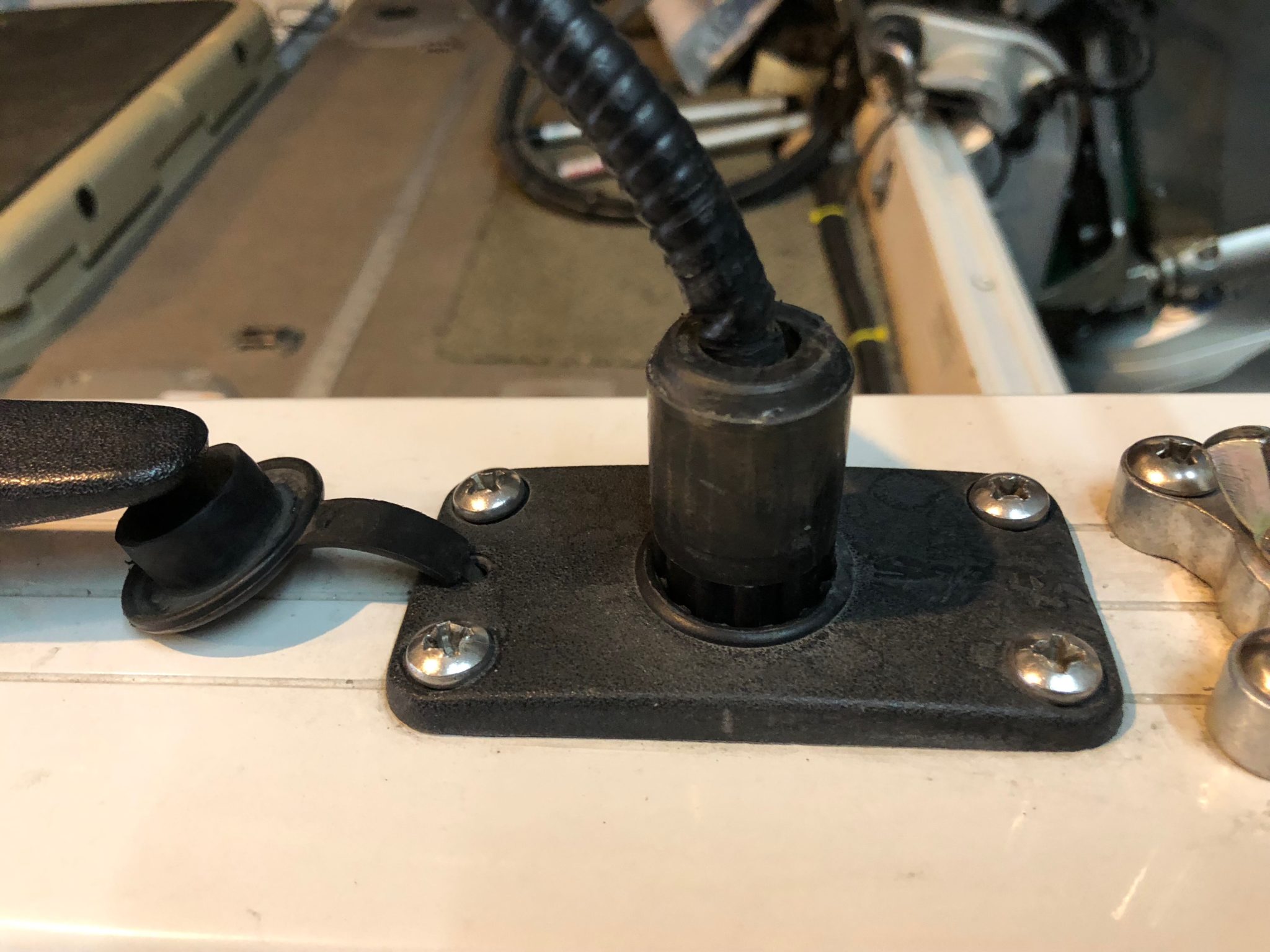 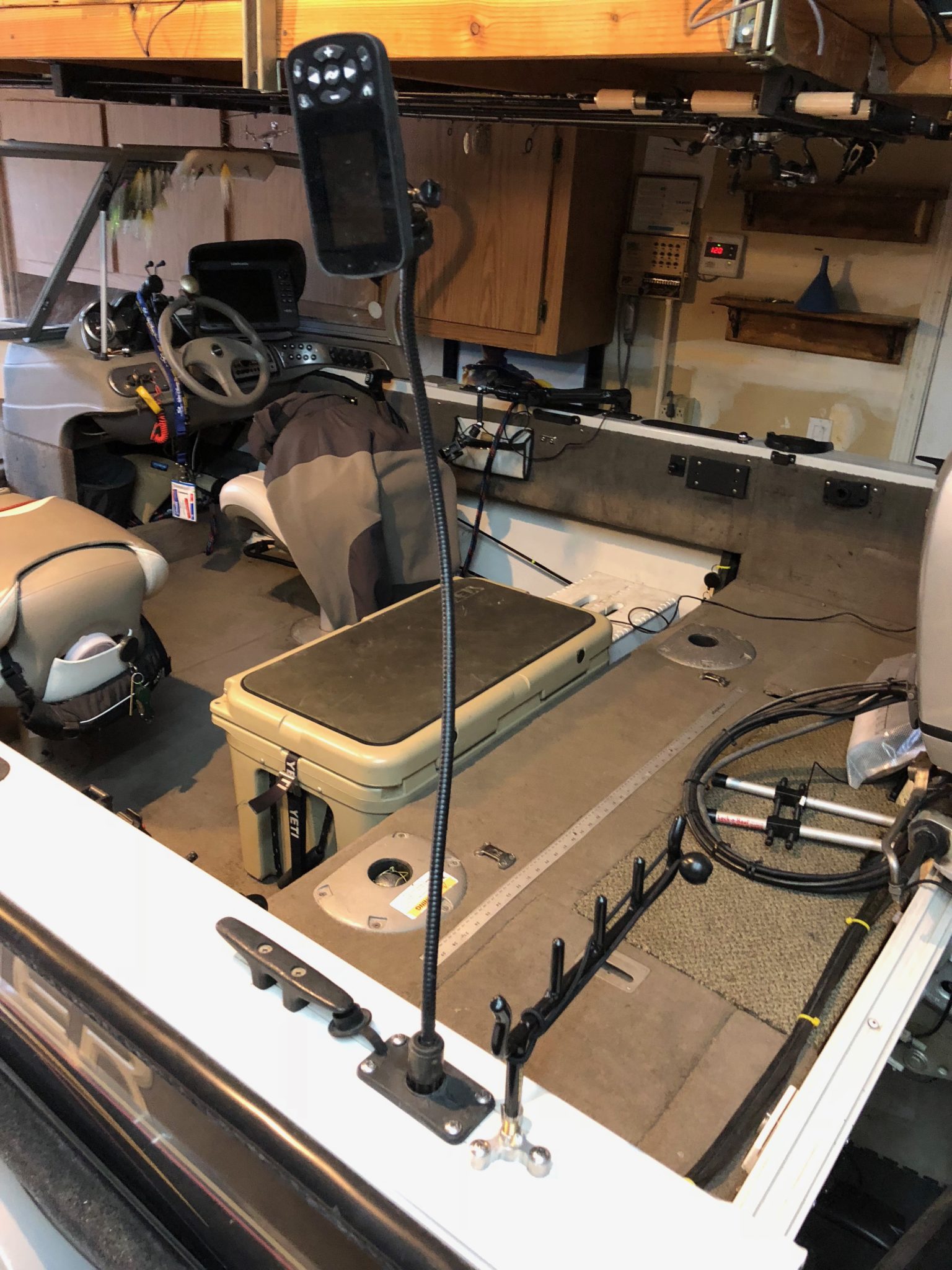 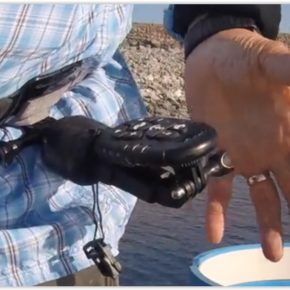 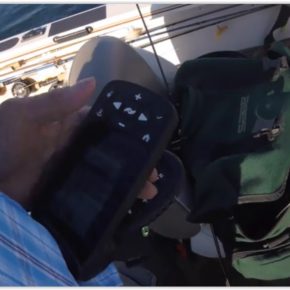 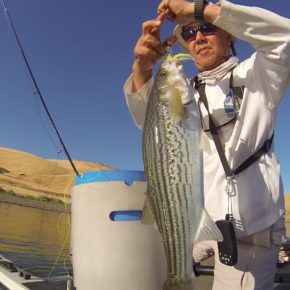 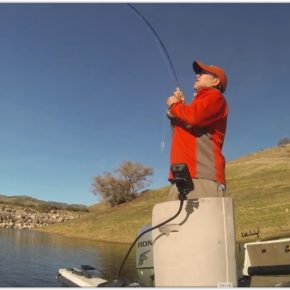 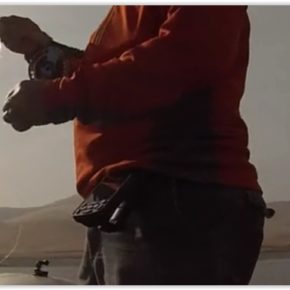 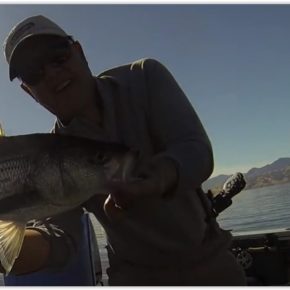 Here is the way I would mount it on a rail.  The connector is for a camera  clamp mount. and screws into the gopro tripod mount at the end of the extension. 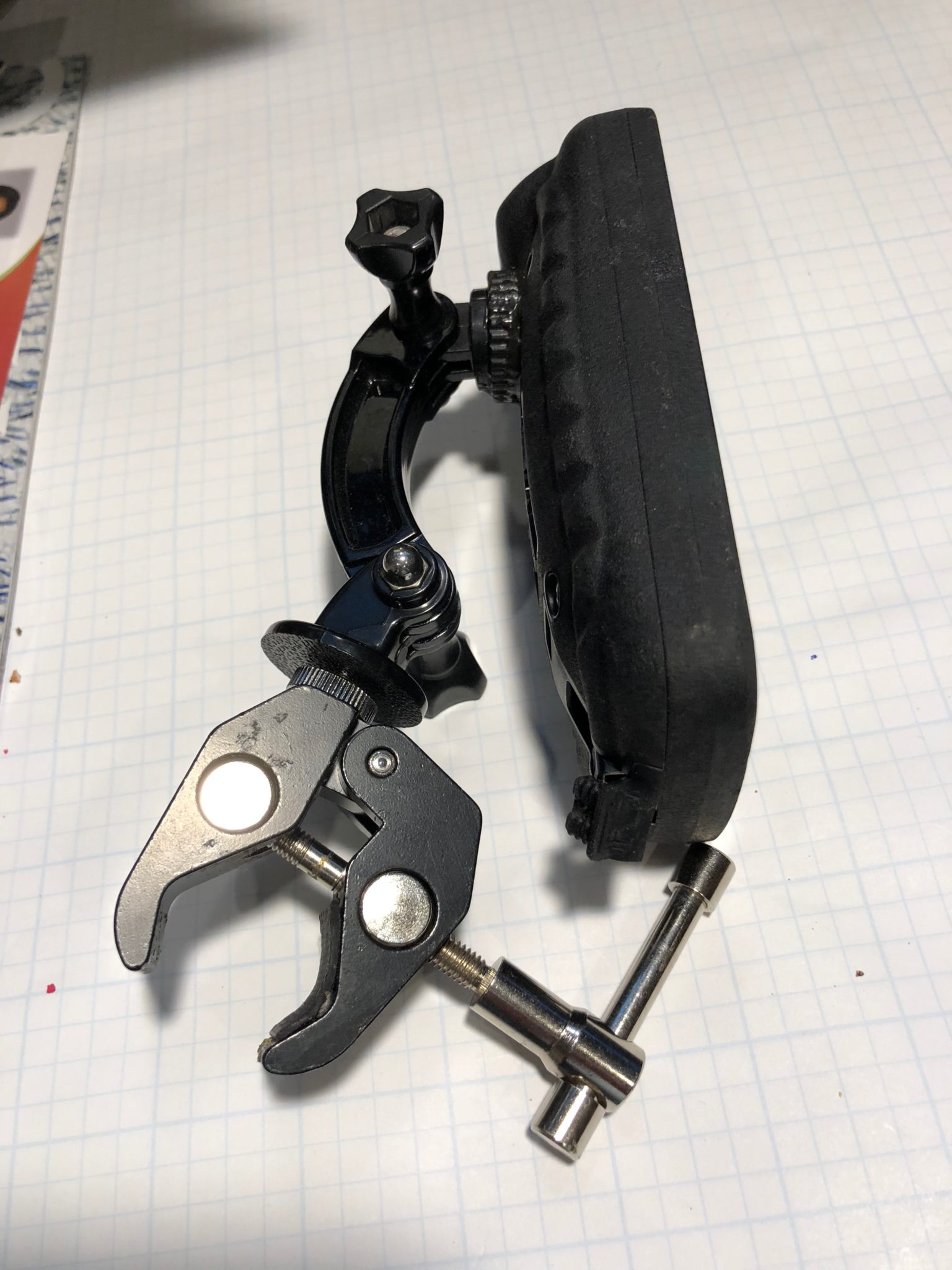