Some of my favorite Striped Bass recipes have been handed down from generation to generation.  My mom made stripers this way when I was a kid,    I remember my dad talking about it in my childhood  while we were fishing.   It seemed the vision of this meal it in his mind motivated him to fish.   The other day,  my mom (86) and aunt (88) requested that I make this dish for them .  The only requirement was that it was caught the day it was prepared.   No pressure right?

I suspect that most of the 20 inch stripers in the lake were born there and will die of natural causes there.  About 20 percent will be caught and eaten,  and the annual summer kill due to heat and o2 depletion will bring the population down much more radically than fishermen could if they tried.  Thank nature that the population of Stripers in San Luis can be drawn down to a small population and in less than a year of a full reservoir, bounce back to optimal levels. No one has ever done a study to see if this if more an effect of pumped in fish or naturally optimized spawning and growth.  The factors that really effect the health and quantity of the Striper population in San Luis is the drawdown and filling of the lake which effect the temperature of the lake,  the dissolved oxygen in the lake and the amount of algae (turbidity) in the water which draws down populations drastically.   I disagree with many people who believe that San Luis  Striper populations are being depleted by over fishing,  even though I am primarily a catch and release fisherman.  This years fishing is distinctively better than the last 5 years in numbers and size and I believe its because of the improved habitat and imported fish from incoming delta water. As long as the water levels stay above 75 percent, fishing should stay great and get better independent of the Delta Striper population.    A biologist once told me that the stripers in SL are the cleanest and best eating stripers in Nor Cal and the only fish that he lets his dad eat sashimi (raw).

The first requirement for this dish is fish that fits in a 20 inch fish poacher .   There is a certain size of fish that warrants filleting vs whole fish cleaning  but the main size requirement by my mother is a fish of 20 to 24 inches that will fit entirely in the pot head and all.  These poaching pots are not cheap either.   I have seen them cost as much as $1500 for the Alessi Officina La Cintura Di Orione Fish Poacher.  I like the Cephelon poacher but anyone will do.

A 24 inch San Luis Striper with two inches of tail cut off is the perfect fish that is optimal length and maximum girth to fill the pot optimally.   A fish like this can feed 4-6 people.

The Fish should be gutted and scaled with slits cut into its sides to help the water to circulate and poach the fish evenly.  Fill the pot with water half way,  salt the fish and the water with sea salt and then finely chop some ginger  and put it in the pot.   Bring the pot to a boil and then put the fish in the water and put the heat on low.   It takes 15 minutes to poach a striper that fills the pot. 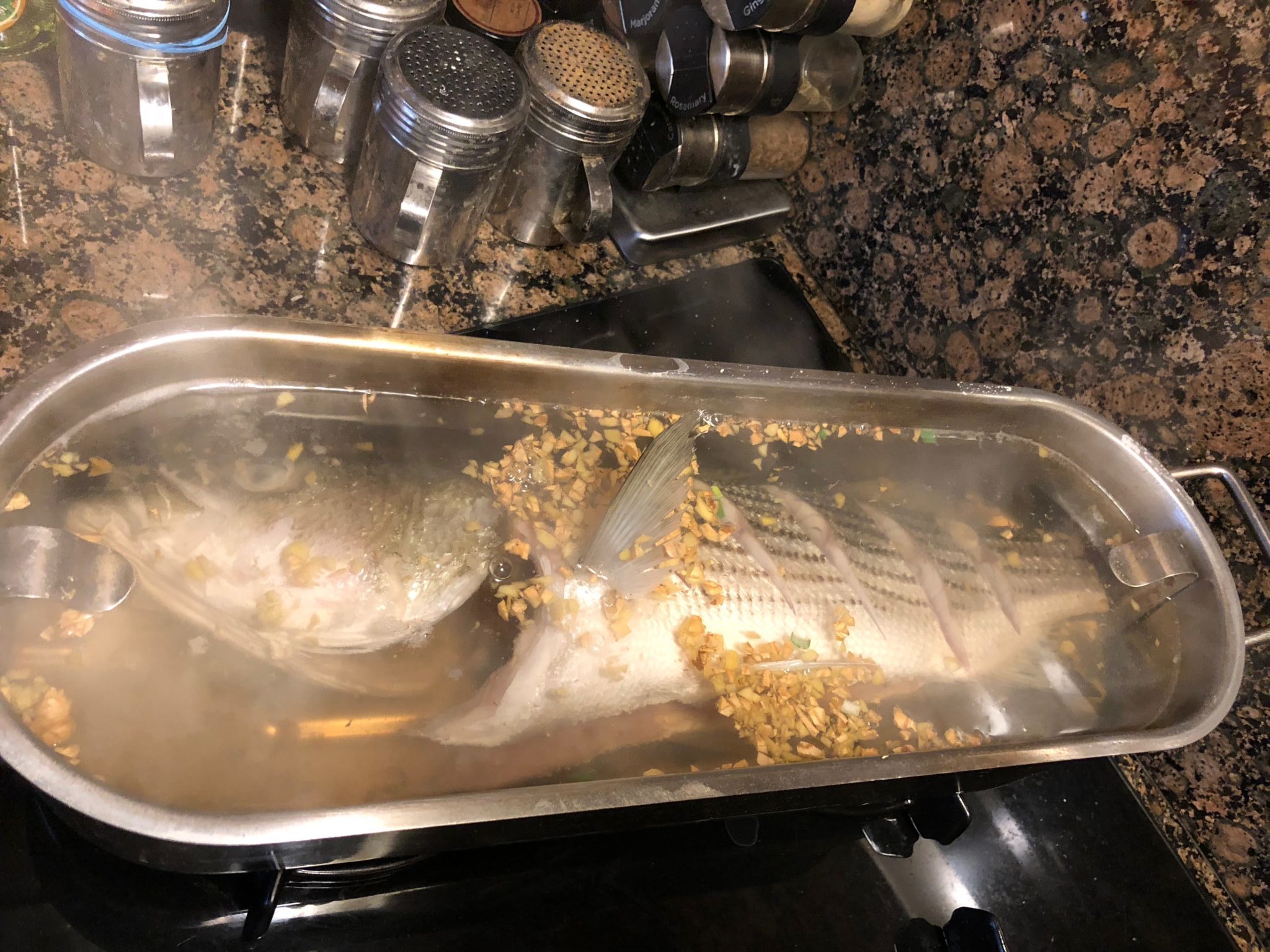 Five minutes before the fish is done in the poacher,  heat some high heat oil in a pan and brown some garlic in the pan to season the oil.   Once the garlic turns brown,  add cut Scallions and some cillantro to the oil and stir fry till hot but not soggy.  Once the oil is at this stage,  plate the fish  and pour the hot oil mix over the fish on the plate. once its on the plate,  I drizzle a light designer soy sauce over the fish  and then scatter some cilantro over the plated dish.   A patient turned me on to this great soy sauce that is micro brewed – Handcrafted Bluegrass Soy Sauce..    Using too strong a soy sauce will over power the taste of the fish. 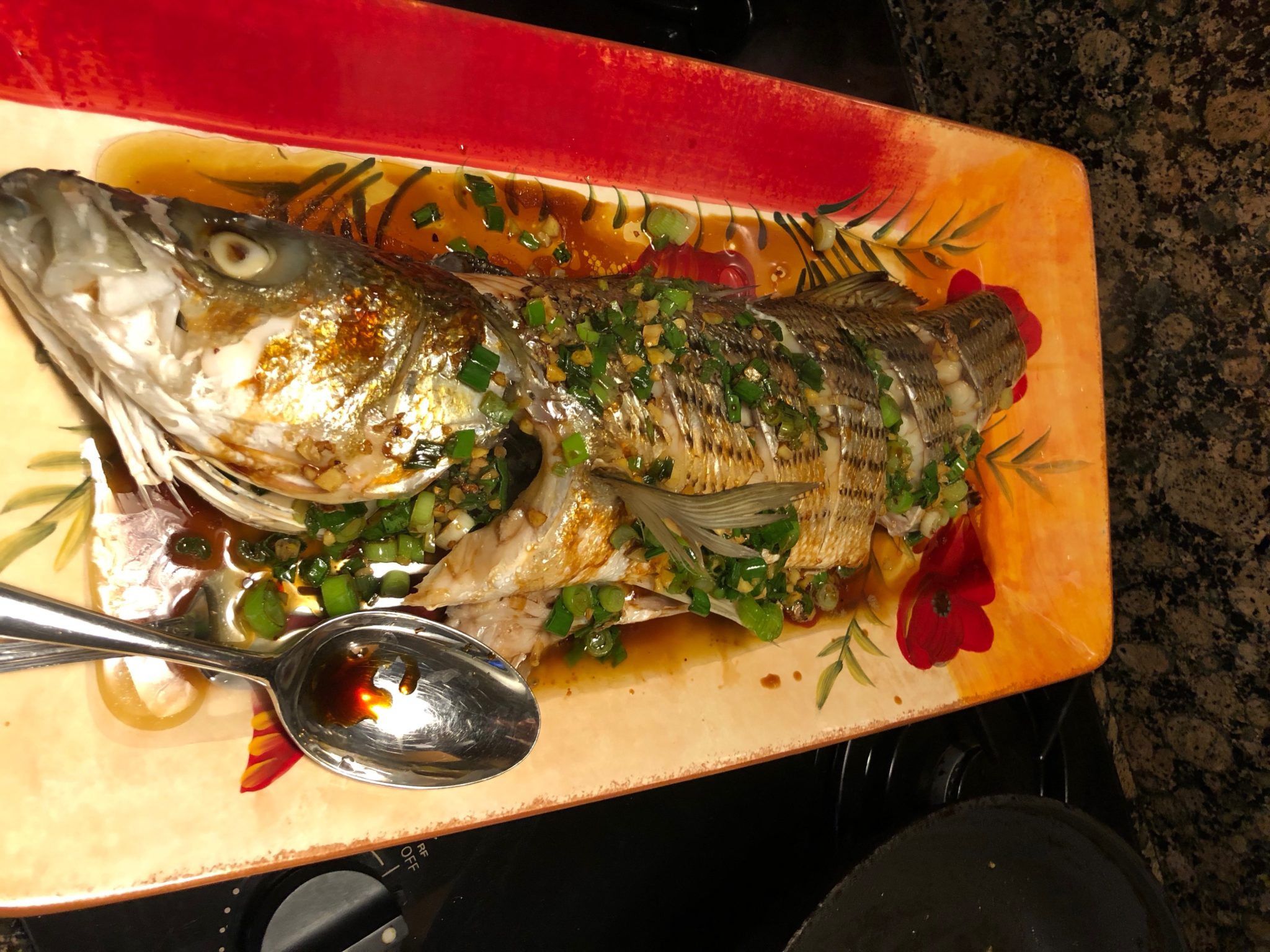 I use to serve this with white rice but lately Ive been making wild rice  in the rice cooker and adding frozen organic peas to the rice after it finished cooking.
It been so long since my mom made this fish in this way that she told me I make it better,  but I think she actually made it better.  When I eat this meal,  I cant help but remember how much my dad liked it and I know he’s with us  when we share this meal. 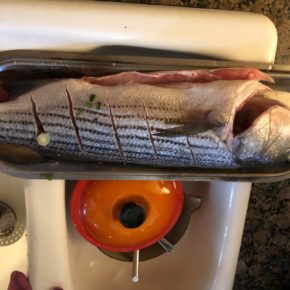 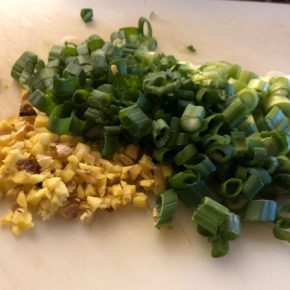 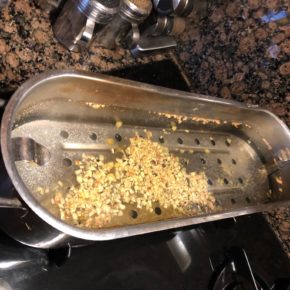 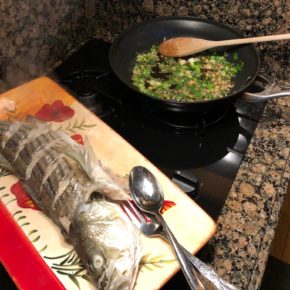 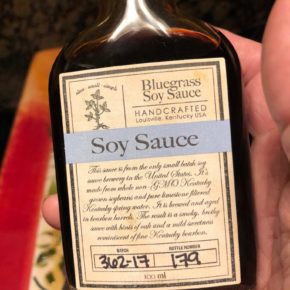 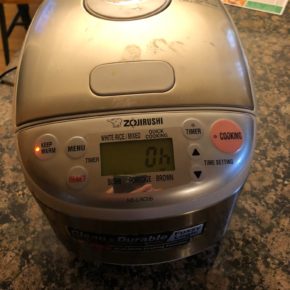 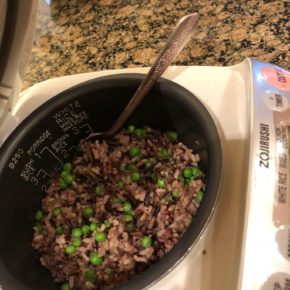 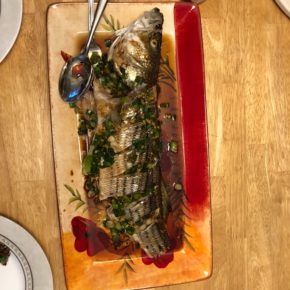 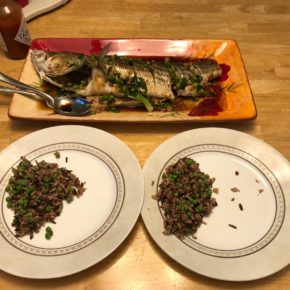 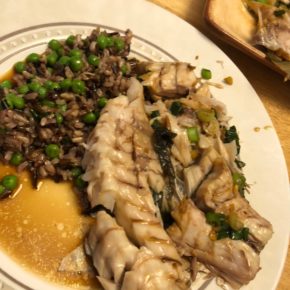