Sunday March 9, 2019  – Sunday was my idea of a perfect opportunity at San Luis, hot weather, no wind and the pumps pushing water into the lake. With the warm weather melting the snow in the sierras and the late rains of a couple weeks ago, for the first time in many years, the Pumps at San Luis Reservoir are filling the lake in June. I got to the lake Sunday with high hopes and I felt like there would be lots of other fishermen at the lake. The water temp was 62 and the algae mat was light though the visibility was limited and very green. The water around the racks wa still relatively cool but perfect spawning temps. Basalt launch was busy at 7:30-I had to get in line. Roger George (the lakes premier guide) was fishing with a friend off the clock. That guy knows everyone on the lake and is a very friendly and knowledgable fisherman who will help you catch fish trolling if you ask him. I read his Fresno Bee fishing report and learn from him.

I fished the shorelines at the Bay of Pigs and Romero with limited success. I didn’t even see much on the sonar so I headed over to the trash racks to fish the current. I was the first one there and could see everyone trolling the middle of the lake. I use to think that those boats out there were wasting there time looking for stray schools of fish in the deep but they were getting them.  When the pumps are on, it sort of shuffles the deck and rearranges the fish. I think now that warm water and pumps makes the fish drop in the water column and leave the shoreline.  The  water coming into the lake is cooler as well which attracts fish.   Fishing the eddies and edges of the water flow was very productive. Also the sonar was constantly metering fish moving around the area staying close to the current edge. The fish were deep at around 40-50 feet so the long count was mandatory. I sometime fish two fly rods to cut the sink time in half casting one on one side of the boat and then casting another while it is sinking. It was almost a sure thing when my fly line was straight down a 100 feet stripping straight up through the columns of fish. Fishing the very edges of the racks was also very productive. I think bait hang close to the wall and the fly contrasts against the wall making it easier for fish to see. By the second hour of the open bite at the racks, all the trollers were working the racks like a game of Frogger. Fly fishing was producing the most fish and many of the trollers stopped by to ask how I was doing so well with the fish deep. I gave away some flies and I think the some of the trollers were hip to trying it. The fish were all prime spawning shape and seemed bigger today than the average schoolie striper. They were hitting on the pause and returning on the strip aggressively.  I ended the day with over 20 fish and left at 1:00pm.

Today I also had a chance to test out the casting platform I made for the boat. Perhaps one of the best boat hacks ever, I was able to make it for under $200 dollars. I was scanning Ebay for a custom platform costing $1000 when I found a premade aluminum framework that would be perfect for a casting platform called a Dunnage Rack. A Dunnage rack is an welded aluminum shelf that is designed to keep heavy boxes and supplies off the floor in warehouses. They can be custom made to any dimension and they are light and can hold 1300 lbs. I built a 3x2x1 foot platform, screwed a 3×2 piece of Polyethylene plastic (1/2″) to the top and covered it with a piece of Hydro-Turf (a piece of closeout B stock). It is heavy and wide enough to not slip in transit and I can move it to the bow or stern easily. A twelve inch height increase is an amazing thing even fishing for stripers. The advantages are better visibility, further casts, the ability to cast over the boat when fishing from the bow without accidentally hitting the windshield (done that), and the ability to point the rod straight down inline with a deep fly line without putting the rod tip in the water. The advantage of that is that you can strike faster and harder without the rod in the water when you can keep the rod straight to the line while stripping. 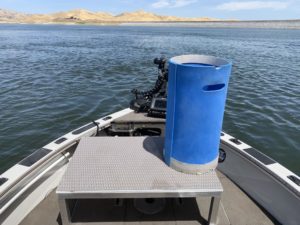 Ed Given knocked down two pigs today in the morning.   Looks like spawners to me. 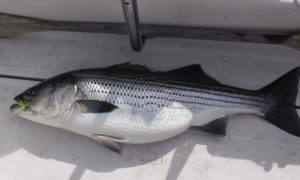 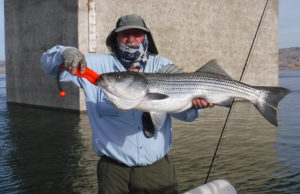 It’s common knowledge amongst expert landlock Striper Fishermen that landlock stripers have a hard time successfully spawning in landlock waters due to the lack of current which is needed to tumble and suspend fertilized Striped bass eggs for a minimum of 30 to 70 hours to hatch. Both the Forebay and the the Lake both have current.  San Luis reservoir  has two sources of current ,  The pumps at the trashracks and the current caused by the fierce consistent winds in the spring when the water temperatures reach  the mid 60s and stripers get frisky.   Several conditions have to be met for successful spawning in landlock water. Despite the biological changes that occur in them from March till May.   Stripers spawn when the water temperature reaches around 65 degrees.  Once laid, the eggs of the striped bass must tumble and suspend in current up to 72 hours before they’ll hatch.  The pumps have been on all week. Thats plenty of time for striper sex in the lake.   The main limiting factor for landlock stripers to spawn is water    The prespawn period  is when fish start to biologically change and usually starts in the spring in San Luis when the water reaches the 50’s in February till March.  Prespawning stripers run in schools and move quickly as they eat veraciously and build up body mass for spawning.  The most common areas in rivers are the headwaters where there is current.  Last week , my cousin Wayne an the twins had a phenomenal day on the Feather in perfect river spawning conditions.   In San Luis the best places to catch lots of prespawn is where there is current.   In the forebay where there is always current,  the outlet and inlets (dam and canal)  and between the power line islands where the current funnels when the dam is letting out water.  I think the forebay is the nursery which explains the abundance of smaller stripers. 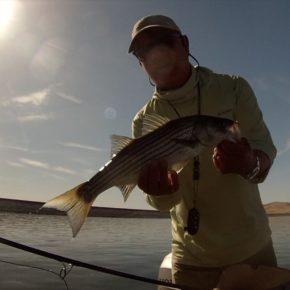 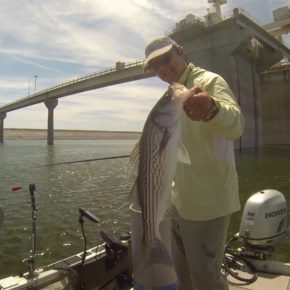 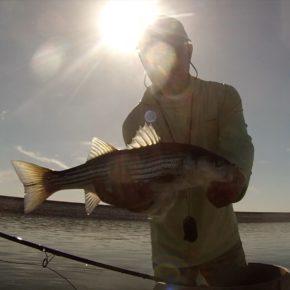 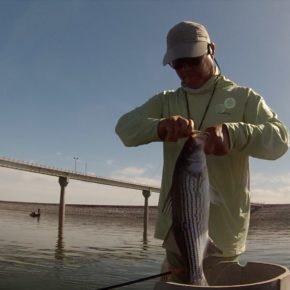 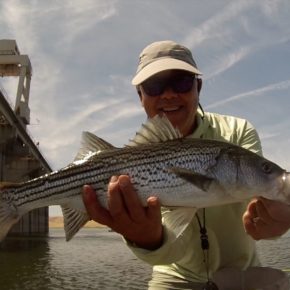 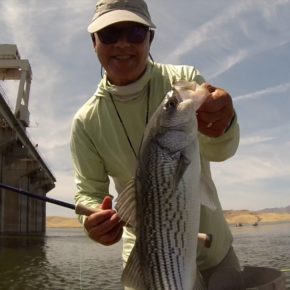 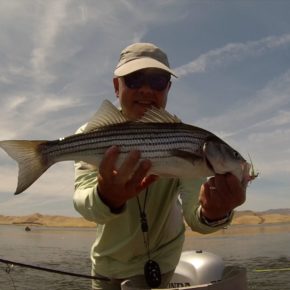 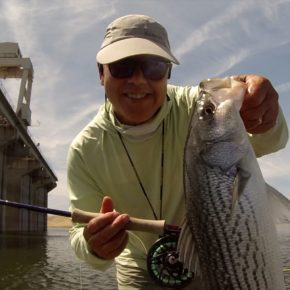